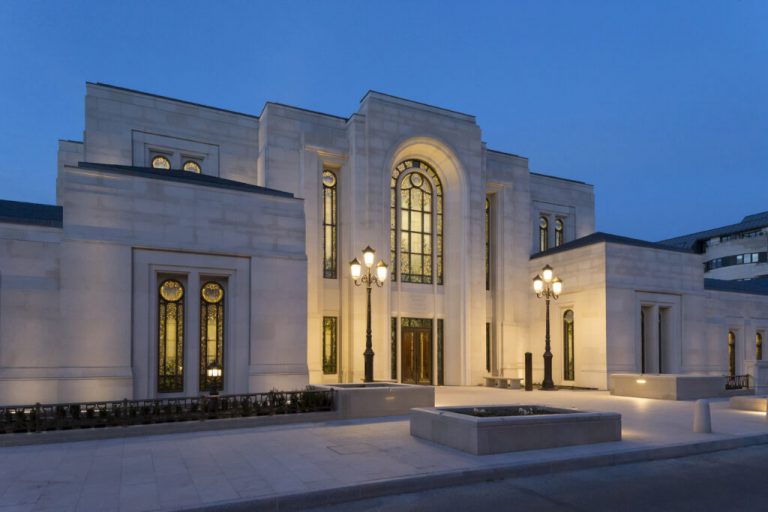 Temples are places where the world slows down and intersects with heaven.  Nothing can compare to the glorious presence of God we often feel there.

In our shifting world of chaos and confusion, many are going to a place where they receive higher learning, personal revelation, and peace…

Unexpected Revelation in the Temple

Many years ago, my husband and I were evaluating if we should have any more children.  My health was poor at the time, and we already had three healthy sons.  Was that enough?  Did the Lord have any more in mind for our family?  My personal desire was strongly in favor of not having any more, but we opted to take our decision to the Lord in the temple.

During the session my husband, Elbert, was shown a vision of me coming out of a particular hospital (under construction near our home) carrying a baby in my arms.  Well, that was the answer.  We were supposed to have another one!

God’s Will prevailed, and within a short time it became clear that I was expecting.  The hospital in the vision was slated to be open long before my due date so I didn’t worry at first. But when I went into labor and it still was not fully operational, I had no choice but to go to another hospital where I gave birth to  a beautiful baby girl.

Shortly after the birth, it dawned on me that the vision Elbert received was guidance for TWO babies. The baby I just bore was NOT the baby he saw in the vision. Even though my health was still poor, I agreed to have this second prophetic child, and two years later, I walked out of that new hospital with another baby in my arms, just as Elbert had foreseen.

This vision from the temple (and our acting on it) impacted our family in incalculable ways.  I would have never chosen to have two more children at that juncture in my life without the revelation we received there.  It was a higher way!

Albert Einstein is alleged to have said, “No problem can be solved from the same level of consciousness that created it.”  Problems can only be solved from a higher vantage point, and that’s why there are so many solutions to be found in temples.  The ways there are higher, because the presence of the Lord, and even angels are there to help us solve difficulties.

She Received a Blessing from Deceased Relatives

A woman named Jan shared a life-changing experience she had in the Logan Temple several years ago.  She writes,

“I had gone to the temple with a very heavy heart…and after the session, I  went into the Celestial room to pray—and to ask for help, peace and comfort. I went, at least weekly to the temple, but this time was different. As soon as I sat down, I felt a presence in front of me. I eventually asked, ‘who is here with me?’

My dad (who had been dead for over 2 years) responded, ‘It’s dad—and I’m with my dad’ (meaning my dad–and grandfather, who had died before I was born). They let me know, through the spirit, they were there to give me a blessing. Three main things were communicated… 1) I was on the right course in life.  2) I don’t need to fear or worry.  3) God is in control—I could trust Him and know he is guiding/helping me (and aware of all the struggles).

“This whole experience left me with such peace!! It helped me to keep moving forward, with reassurance that all would be well–eventually. Our departed families are nearby and are very concerned for our welfare!”[1]

Jan received revelation for her life.  What if she hadn’t gone to the temple?  Sometimes we just need to make the effort to go where the greatest blessings are…

There are so many wonderful blessings that can be received in temples.  I love what Orson Pratt taught about spiritual outpourings that occurred in the Kirtland temple.  From time to time any of these can also occur in temples today.  He wrote,

“God was there, his angels were there, the Holy Ghost was in the midst of the people, the visions of the Almighty were opened to the minds of many; they saw the heavens opened; they beheld the angels of God; they heard the voice of the Lord; and they were filled from the crown of their heads to the soles of their feet with the power and inspiration of the Holy Ghost.” [2]

Many have partaken of these higher outpourings…

David Malpas is a convert to the Church from Australia.  At the time of this experience He and his wife had 9 children and had no intention of having any more.  He was 54 and his wife was 42.  At that juncture in his life David was struggling with some very difficult trials. To find solutions, he was attending the temple every day as he desperately needed the peace that only the Temple could bring. He writes,

“I was sitting in the endowment room waiting for the session to commence.  I was feeling consumed by the difficulties I was having and feeling heavily burdened and wondering how I it could all be resolved.  Suddenly everything fell silent, and it felt like I was completely alone in the room. I heard a ‘voice.’ It is hard to describe. It was not an audible voice that others could hear, but it was audible in my mind. It was a male voice and spoke to me clear as a bell. Both soft and gentle but powerful and pronounced. I was startled by it. He announced,

“‘You have one more child to come to you. He will be a boy, and he will come soon.’

“This was incredulous as I was currently separated from my wife and seemingly insurmountable hurdles had to be overcome for us to reunite. Also interesting to note is that the last two children we had, took several years each time to conceive. “Anyway, very soon after that, the problems were miraculously resolved, and my wife and I came back together in love. She fell pregnant almost instantly, and our son was born those few months later.

“I don’t know whose voice it was that spoke to me in the Temple. I did not recognize it. But His message was clear and unmistakable.  I often reflect back on that experience and feel love and gratitude to my Heavenly Father for that wonderful gift of reassurance, when I needed it most.” [3]

David went searching for and received higher answers at the temple.

Hugh Nibley, a renowned scholar, loved the temple and admits that it was there that he received much of his inspiration.  He wrote,

“Last Saturday I left the temple loaded with instructions, specific instructions.” …“I found it all laid out for me because I was looking for it.  That is always the case when you are going to the temple.”  [4]

Felt Father Walking with Her

Patricia Higley received revelation about her deceased father in the temple as she sought inspiration there.  She writes,

“My father was inactive LDS all his life. He passed away at the age of 72 from complications due to emphysema. I made sure his temple work was done, but still was concerned about his spiritual progression. He could be so stubborn!

“One day as I fulfilled my assignment in the Columbus Ohio temple, I walked the hall towards the celestial room. As I did so, I had the distinct impression that my father was walking with me! I begged him to stay with me until I got to the Celestial room, but he spent only a few seconds with me and was gone again.

“I will always be so grateful to know that if he could be in the temple, then he is progressing spiritually!” [5]

That revelation was deeply meaningful to Patricia.  Sometimes the temple takes us to that place in which circumstances can be seen from a new perspective. Jeffrey R. Holland taught,

“Cultivate and be where the Spirit of the Lord is…If you are endowed, go to the temple as often as your circumstances allow.  Remember that the temple arms you ‘with [God’s] power,….[puts His]glory…round about [you], and [gives His] angels…charge over [you].” [6]

Raise Your Spiritual Level in the Temple

I Would Love to Hear Your Experiences.  You Can CONTACT me at [email protected]

These are certainly very fine and uplifting faith-affirming experiences shared. However, I caution that while the author is right that the temple is a place of precious personal revelation, it is not the only place, nor a place of "higher" revelation. While I have also enjoyed the powerful flow of revelation in the temple, the two most spiritual experiences of my life took place in a missionary apartment and in a chapel. Others in a bedroom, living room, etc. Revelation can be received most anywhere needed if the member with the gift of the Holy Ghost is worthy and exercises faith and is not in a bad/wicked place. Mountain tops and groves have substituted for temples when none were available. Still, thanks for a nice article with edifying content.