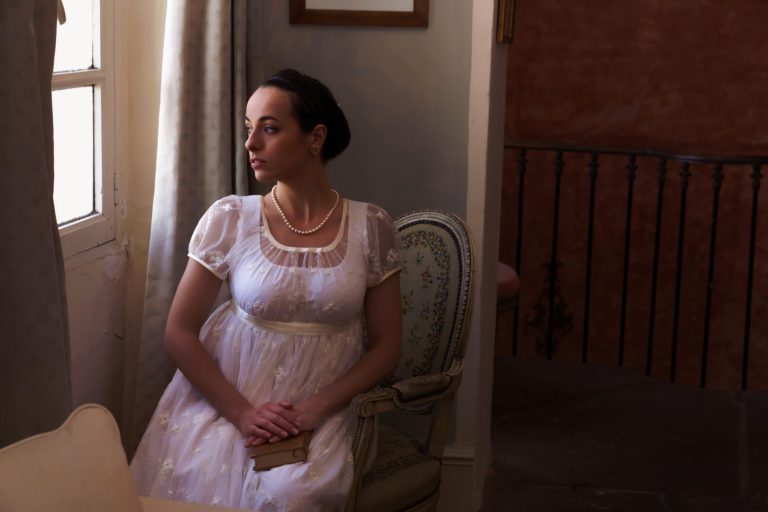 LDS Fiction: A Trio of Regencies

Most readers enjoy a bit of romance in the stories they read and in recent years readers who want stories that are primarily romantic without erotica have turned to the Regency period, that era in England when England was ruled by a prince regent, the second decade of the 1800s. Today’s column includes three Regency novels. They all focus on courtship and marriage according to a strict set of rules during a time when women had few civil rights, fashion and appearance were paramount, and money and social position determined marriage expectations. All three of these stories will absorb the attention of fans of this genre. All three are more interesting than their covers suggest.

Josi S. Kilpack is adding another volume to her Regency Mayfield Family Series this month with Daisies and Devotion. This series is based on the nephews and nieces of an elderly man whose family made bad choices and damaged the family’s reputation and fortune. He sets out to turn his nephews and nieces lives around by helping them make good marriages and establish themselves honorably. This story features Timothy Mayfield who is in his mid twenties. He has high ideals, but is immature, childish in many ways, even silly, has never taken responsibility for his life, but lives on a small allowance from his uncle. He has a dream list of the assets his future wife should possess. A woman with money is essential until his uncle provides an incentive for him to marry.

Maryann Morrington cared for her dying mother for several years which put her late coming out. At twenty-two she is older than almost all of the other debutants and she is not a stunning beauty. She is an heiress and quickly tires of men pursuing her for the fortune they would gain on marrying her. She and Timothy become friends with an appreciation for each other’s blunt honesty. In spite of romantic ideals and the stark realities of ton marriages they both believe love is an essential element to a happy marriage. What they hadn’t counted on was the jealousy they feel seeing each other with someone else. Could there be more between them than they thought?

Whether the reader likes the characters in this story or not as people they’d like to know in real life, it is still clear they are portrayed well, fit into the time period and setting, and use dialog effectively. Kilpack has done her research well and paints a vivid picture of British upper crust society in the early 1800s. There isn’t a lot of action in this story, but it does build to a strong climax.

Josi Kilpack has written over two dozen books and has won four Whitney awards. She and her husband with their four children live in Northern Utah.

Adeline Hayes serves as a companion to Charity Edgeworth, though they’re more best friends than employer and employee. Charity’s father is furious when he learns his daughter has broken her engagement to the man he has chosen for her. Even Adeline doesn’t know why Charity ended the arrangement. The angry man orders both girls to the country, but goes a step further. He threatens Adeline that if she doesn’t find a husband for Charity he will dismiss her and evict her ill father and spinster sister from their home.

Finding a suitor for Charity in country social circles isn’t easy. One obstacle after another gets in the way. She is distracted by a neighbor, whom she finds herself attracted to in spite of his bossy, know-it-all, attitude. The ex-fiancé shows up, and through it all, Charity would rather read then pay attention to the eligible bachelor who shows her distinct attention.

The characters in this Regency Romance are realistic, but not particularly likable. Everyone seems to know what is best for everyone else. The writing is excellent and even when the reader doesn’t like some aspects of a character, the well written action holds the reader’s attention. The social rules and masculine dominated culture of the early 1800s in England are handled well.

Joanna Barker was born and raised in Northern California. She graduated from Brigham Young University with a degree in English. She has worked as an acquisitions editor. She, her husband, and two sons now live in Utah.

A PROPER SCANDAL by Esther Hatch

Esther Hatch’s new Regency novel, A Proper Scandal, is a classic Regency novel though the time of the story is set a little later than the regency era (1811-1820). The scandal isn’t exactly proper either for the time period with more than the usual references to physical attraction and the numerous attempts to stage a situation that would require a hasty marriage. Even so, the story is a light, clean, quick read.

Grace Sinclair was left an orphan at fourteen and with no family able to take her in and an extremely distant relative inheriting her father’s property she goes to live with the vicar and his family. This arrangement works well for six years, but when the vicar’s daughters reach marriageable age, they don’t need competition from a beautiful young woman with a huge dowry. And she is tired of fending off men seeking her dowry. That’s when the vicar’s wife reaches out to Grace’s aunt who has remarried and Grace is shipped off to London to live with the aunt, her husband, and stepdaughter.

She soon realizes she’s in a worse situation than she was before. Her new uncle is a crook, a gambler, and a rake. He not only plans to marry her off to someone who will alleviate his debts, but keeps her busy avoiding his wandering hands. He sets up a plan to trap a man he owes money into marrying her. Believing she has no choice, she tries to go along with the plan but fumbles every entrapment attempt and falls in love with the intended victim, Nicholas Barton.

The characters are interesting and fun to follow. Grace is a believable cross between courageous and impossibly naive. She is a product of a society that based a woman’s worth on her clothes, her face, and her male connections along with her dowry. Mr. Barton steps outside convention by not being satisfied to rest on an inherited estate, but undertakes establishing a profitable railroad engineering and construction firm for which many of his peers look down on him. The uncle is appropriately slimy. I found the clothing descriptions amusing, but probably accurate. The action moved at an enjoyable pace and though there are no great surprises, they are fun to read, and they move the story along well. The background and setting for the story are included comfortably.

Esther Hatch grew up  in Utah and alternated teaching English in Russia and attending Brigham Young University after high school. She has a degree in archaeology. This is her second published Regency.

A PROPER SCANDAL by Esther Hatch, Published by Covenant Communications, 222 pages, soft cover $15.99. Also available on CD and for eReaders.