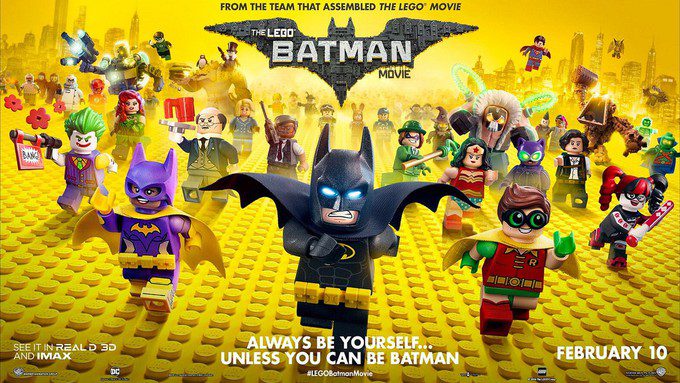 WHAT’S THE LEGO BATMAN MOVIE ABOUT?

Batman’s fear of connection and family is tested by The Joker’s grandest scheme yet.

As a loving and clever deconstruction of the Batman mythos and a surprisingly moving tale of loss, loneliness, and finding family again, The Lego Batman Movie is one of the best Dark Knight stories ever filmed. It’s also one of the funniest comedies in years (including live-action), with an endless barrage of one-liners, sight gags, and clever parodies of superhero and fantasy movies. The vocal cast is perfect (Will Arnett makes for a hilariously narcissistic Caped Crusader), the animation is bright and busy, and the moral themes are poignant. My kids ages 2-10 were enthralled from beginning to end, and so was I.

The Lego Batman Movie is rated PG. It has slapstick comedic action violence that is deliberately silly, non-lethal, and non-brutal. There is no foul language, but there are a few mild innuendos. Batman to Joker: “I’m fighting a few different people right now. I like to fight around.” Robin: “My name is Richard Grayson, but the other orphans call me Dick.” Batman: “Yes, well, kids can be cruel.” The password to the Batcave is “Iron Man s*cks.” Robin rips off the pants of his costume so that he’s only wearing green underwear. Batman is also seen in just his underwear from the waist down in a comedic moment (he has Lego legs, so it’s not too revealing).

Fear of pain and loss can keep us from the joy of love and connection. Vanity pushes people away. Riches do not lead to happiness (see Ecclesiastes 5:10). You can’t fight life’s battles alone; allow other people into your heart and be united (see Mosiah 18:21).

Jonathan Decker is a licensed marriage and family therapist, an actor, an author, and a television personality. He is slated to present a lecture series on “Stepfamilies and Adopted Families in the Gospel” at this year’s BYU Education Week. He will also be a panelist at Salt Lake Comic Con’s FanX in March. For his relationship tips, family media reviews, and Gospel articles follow him on Facebook, Twitter, Pinterest, YouTube, or LinkedIn.