Saturday’s Warrior: Will a Stage Production of the 70’s Attract an Audience of Today? | Meridian Magazine 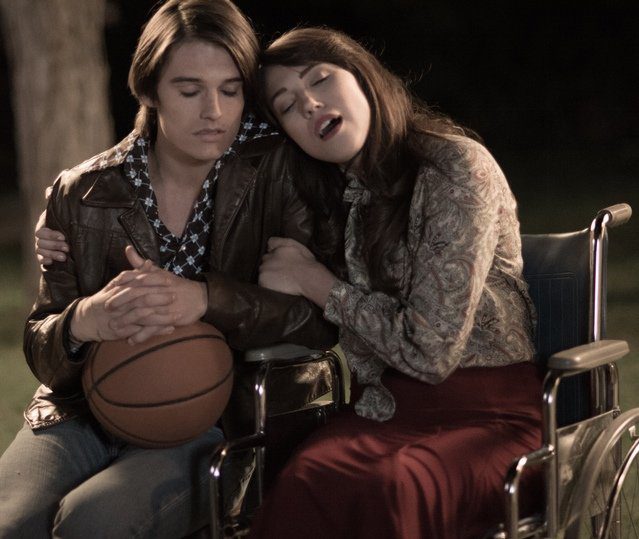 Saturday’s Warrior: Will a Stage Production of the 70’s Attract an Audience of Today?

The new film version of Saturday’s Warrior will hit the theaters Friday, April 1, but last night at its VIP premiere, casts from many of the former productions and the video joined to give the movie a send-off.

Saturday’s Warrior has simply been an LDS phenomenon in its earlier versions, leaving most of the rising generation the idea that they might have a sweetheart somewhere they were pledged to in the pre-mortal life.

Though co-creator Lex de Azevedo says this is an “extra-doctrinal” idea, this movie, which is essentially a modern version of the prodigal son, was difficult to create because it has been so beloved in its earlier form. How can you top it? It’s like remodeling your mother. It is almost too adored to touch.

One woman said at the premiere that she had watched the 1987 video version of the play nearly every Sunday growing up, and knew every song and every dance step.

In fact, de Azevedo said he has resisted making this movie for many decades, worried that it wouldn’t translate into film or meet the exaggerated expectations.

When de Azevedo had first created the show with Doug Stewart as writer, he was almost embarrassed at the response it was so huge. It had been meant only for a local performance, but ended up running for years with something like 130 performances in Salt Lake alone.

He said, “This play was first created when the Brady Bunch was on television.” The humor then was Hee Haw and the Carol Burnett show, something that wouldn’t play well to a generation reared with different sensibilities.

A film version that would appeal to today’s audience had to have its own personality without losing the elements that has made it a perennial icon. This is tricky stuff.

When Alex Boye, who plays a sort of heavenly coordinator for earthly births, first learned he got the part, he told his wife and in-laws who seemed remarkably thrilled. Because he joined the church at 16 and grew up in England, he had only seen bits and pieces of the earlier show and had no idea the hallowed ground he had just entered until he saw their over-the-top response.

Kenny Holland, who plays the wandering son, Jimmy, also was unacquainted with the show. When he received an email about auditioning for the part, he thought the tryouts were on Saturday for a movie called Warrior.

They, who know so little about the show, are the few exceptions compared to so many who have been rooting for Todd and Julie to get together and Jimmy to come home for at least 40 years

First Decision: When Does This Happen?

The first thing that de Azevedo and Michael Buster, the film’s co-writer and director had to address was in what time frame this movie would take place. Would they abandon the early 70’s with its focus on zero population growth—something nobody much talks about these days?

They finally decided that a film that takes place during World War II or some other time frame still appeals to an audience. It is the story itself that must be timeless—and since this is essentially a prodigal son story, that message would play well in any time frame.

Holland, who won the lead role in a four-month audition, was recommended for the part by his mother when she saw an audition request on Facebook. Like Jimmy, he is a musician, but also like Jimmy he has had his prodigal leanings. He said, “The Jimmy character and I share a lot of common interests and experiences. To jump into that role was an interesting, difficult and exciting thing for me. I got to learn a lot about myself through the character.”

He is releasing an album on May 1, called Boats which means “based on a true story.”

Translating a play from the 70’s to a film for today’s audience also means characters had to be rounded out, back story added, their black and white world nuanced with more gray. Jimmy has to find out what it means to hit rock bottom before you learn core truths. Todd is more than just some guy in the park who responds to Elders Kesler and Green. You see where he comes from and why he would be searching so hard for something more.

De Azevedo said they particularly tried to strengthen the women’s roles. In the stage play the mother had been one dimensional, and you didn’t know much more about her than that she was adept at producing babies. Here her backstory and sacrifice are highlighted.

Pam, in a wheel chair, is a symbol of pure faith and something more in the new film. According to Anna Daines, who plays the role, “We tried not to drastically change Pam, but make it more clear that when something hard happens to you, you have to consciously choose faith.”

Buster said that a key discussion for the creators centered on tone. If they were going to laser in on the dramatic elements could they keep the humor? They did, but it is not as broad as in the original, the slapstick is gone—except, perhaps, with the perennial favorites, the two elders who have such high expectations for what they are going to accomplish on their missions in the pre-mortal world and are smacked with reality on their mortal missions.

They come off as funny, sometimes disappointed and Kesler is hilariously and naively arrogant.

Buster said the creators also decided to avoid gimmicks in the show, except for a couple of nods to the past for those who have seen it for years. Those who have never seen the show will see this as standing alone with no need for past references. Those who have loved it for decades will recognize references in the new venue.

Listen for the name of the airline captain when a voice over the intercom speaks during the airport scene. Watch for the Piano Guys in a scene in the park.

While some music is cut from the original (Goodbye “Daddy’s Nose”), Lex has created some new songs, including the open sung by a flamboyant Alex Boye. The film does not start with the familiar Saturday’s Warrior song, “Who are these children coming down, coming down?” This was changed as they thought it started out the film on too ponderous a note, that it was taking itself too seriously.

With all the changes to the original (what the creators hope are improvements), de Azevedo believes it will still make audiences laugh and cry. He said he has had the people who loved the original in his mind the entire time during the creation of this new film.

His wish? That he had had a million more dollars to make the film but he says, “You can’t be perfect on any budget, but you can have magic on any budget.”

I am so glad it has made it to Boise, where my son, born in that era, daughter-in-law, grandson and granddaughter live. I saw it last night in Cache Valley and was so impressed. I loved the stage musical, but so many more will able to see it this way and a whole new generation can experience the majesty of the music and lyrics. The message is timeless. I laughed so hard during the Kessler/Green/Julie scenes and shed tears during the dramatic scenes of struggles and hardships------much like life. Well worth seeing and a keeper. I will be buying this one! Thanks for having faith and sharing it all over again. It brought back fond memories............

Just finished my second viewing of Saturday's Warrior....How could it be better than the first? I picked up some one-liners I missed the first time. The music transposed me back to the colorful 70's and touched my heart yet again. My 9 friends also raved about the high quality production and were smiling through the tears. Absolutely excellent!.