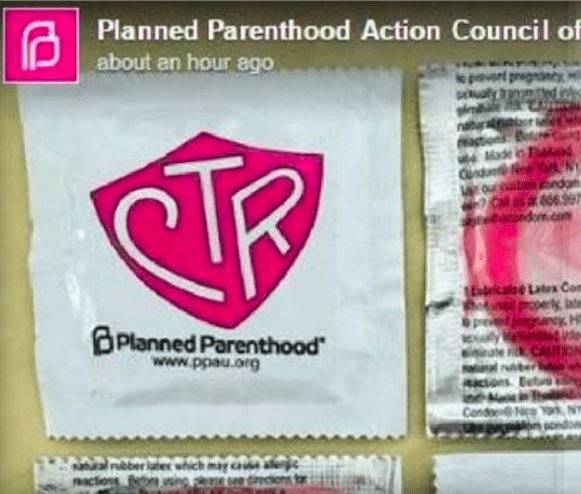 This is a report from LifeNews.com.

A Planned Parenthood affiliate in Utah is facing public backlash after it integrated a Mormon trademark phrase on its new condom packages.

KSL News in Utah reports the condom packages showed the letters “CTR” against a pink shield, a reference to a popular Mormon hymn and symbol used in youth religious education programs. On Monday, the abortion group posted a photo of the condoms on its Facebook page, but deleted it later that day after the public began to complain, according to the report.

The Church of Jesus Christ of Latter-Day Saints issued a statement saying it has a registered trademark for the imaging, and it did not give Planned Parenthood permission to use it.

Here’s more from the report:

The design is a reference to an LDS hymn about making good choices called “Choose the Right.” It is also an integral part of the church’s program to prepare children, ages 5 to 7, on the road to baptism as they develop and prepare to make a commitment to Jesus Christ. Many children are given rings emblazoned with a shield and the letters “CTR” as a reminder of the Choose the Right message.

… After deleting the first post, Planned Parenthood Association of Utah, which also fights for abortion rights and family planning, re-posted the photo Tuesday afternoon and said the intent was to “use this imagery to foster an important conversation about condom use and safe sex in the big-tent LDS community.”

The condoms were designed specifically to give away at the annual 2016 Salt Lake Summer Symposium of Sunstone magazine, the organization said.

“While we acknowledge that this tongue-in-cheek messaging does not appeal to all audiences, Planned Parenthood often uses humor as a rhetorical device to spark open, honest conversations about sex,” the organization wrote.

Since then, the abortion group also deleted its second post and the photo. Now the Planned Parenthood Utah Facebook page has this message:

PPAU has designed a special run of CTR condoms to give away at the 2016 Salt Lake Summer Symposium of Sunstone Magazine. Our intent was never to offend, but to use the idea of “choosing the right” to spark open, honest conversations about sexual health and contraception. We strive to be sensitive to our community and after listening to feedback, we have decided to remove the photo from our Facebook page.

At best this Planned Parenthood's product label is in poor taste, at worst it is a trademark infringement punishable be hefty fines. Whoever thought of this brain-dead idea at PP should be fired.

Planned Parenthood's use of that emblem is evidence that they cannot choose the right.