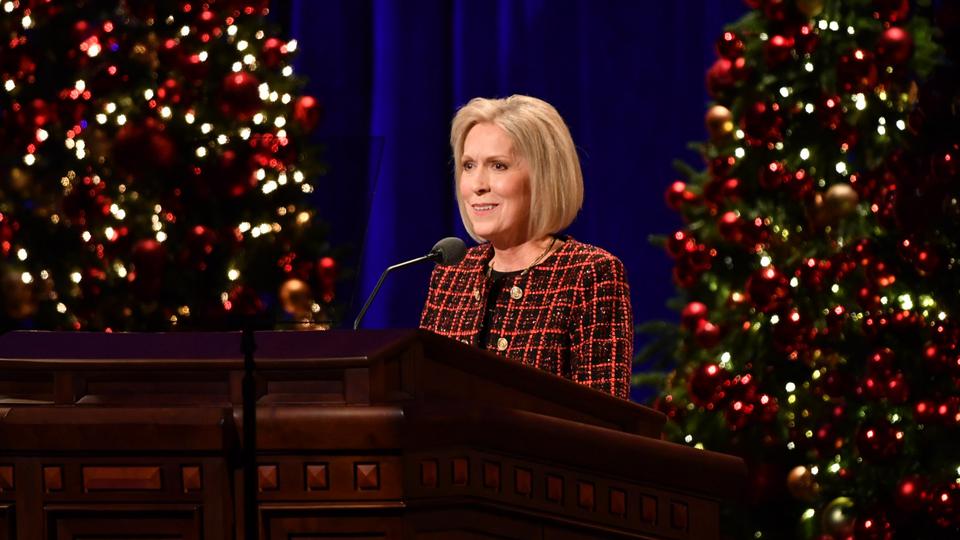 Personal Stories Shine in Heartfelt Messages at the Christmas Devotional

Part of the magic of Christmas is that the birth and life of Jesus Christ is a commemoration on a monumental scale, but the holiday somehow also manages to be so poignantly personal to each one that celebrates it. “The hopes and fears of all the years” are met in that night, but each hope and fear belongs to an individual.

And for me, it was the personal stories that were shared by the speakers at this year’s First Presidency Christmas Devotional, which was broadcast live around the world from the Conference Center in Salt Lake City, that had the greatest impact.

Sister Joy D. Jones, the Primary General President welled up with a few tender tears as she shared the story of a particularly heartfelt gift that was given to her by her mother when she was a child:

“Each night, after I went to bed, my mother spent an excessive amount of time secluded in her bedroom. All I could hear was the sound of her sewing machine. She sewed so much of our clothing anyway, that I didn’t think much about it. But as Christmas neared, my mother was completely exhausted.”

So exhausted, in fact, that a doctor advised her mother that she should stay in bed for a week, which would mean Christmas morning and Christmas dinner without her mother there. Dad would be left to prepare the festive food alone.

“Christmas Eve found me on my knees, praying that my mother would be miraculously healed and that Christmas morning would be as it had always been; our family gathered around the Christmas tree. Disappointment washed over us all Christmas morning, as we found our mother still sick in bed.”

When the time came to open gifts, she discovered that her mother had spent all those late December nights making her a collection of beautiful doll clothes. And as she played with them that day, her father snoozed by the fire—exhausted from making the rest of the Christmas celebration beautiful and memorable on his own. Sister Jones remarked that her parents, and their willingness to love and sacrifice for her, were a gift in her life that kept on giving.

Similarly blessed by the kindness and generosity of others, Elder Ulisses Soares shared how his family was downright defeated by their first winter in Utah after arriving from the palm trees and sandy beaches of their life in Brazil.

He had fallen on ice and injured his wrist badly enough to need surgery. Because he was incapacitated, his wife boldly endeavored to snow-blow their driveway. The doomed attempt left her with a double ear infection so bad that she couldn’t hear fully for a couple of months. Meanwhile, his son had injured his back sledding and so was consigned to his bed.

It was in this state of family wide wintertime wipeout that a neighbor silently stepped in to help:

“One of those early frigid mornings at about 5am, I woke up to the sound of a snowblower outside my window. I looked out my window and saw my neighbor from across the street…at nearly 70 years of age, he had left his warm and comfortable home and quietly came and cleaned up our driveway and sidewalk, knowing that we were not able to do it ourselves.”

Another friend appeared to drive Elder Soares to work in Salt Lake as his cast made driving difficult. Each morning these men appeared to offer their quiet and simple, but essential service to this family in a state of need.

“During that cold Christmas season of 2003, these angelic brothers were sent to us, just as the ministering angels were sent to the lowly shepherds of old. These two brothers followed our Savior’s example and thought of our needs before they thought of their own.”

Likewise, Elder Soares said that we could visit the modern-day shepherds, those sometimes socially isolated people whose tasks keep them from the daily interactions that others might have, and we can look for the Josephs and Marys—those who “have moved away from their homeland and are trying to adjust to a new life.”

Like the angelic hosts, we can share the “good news of Christ: peace and comfort”, said Elder Soares.

In Elder Dallin H. Oaks’ address, he talked of peace itself in quite personal terms, in that peace on earth comes back to each of us finding personal peace.

“The Savior and his apostles had no program for world peace other than individual righteousness,” he said. “They mounted no opposition to the rule of Rome or to the regime of its local tyrants. They preached individual righteousness and taught that the children of God should love their enemies, and ‘live peaceably with all men.’”

He added, “We cannot have peace among nations without achieving general righteousness among the people who comprise them.”

And it is only through Christ that we can find that personal peace that comes from repentance and a striving for individual righteousness.

“Believe that there is a particular gift in this season for you. Seek for quiet, solitary moments when you can ponder, pray, and feel the loving kindness of the one whose birth makes any joy in any life possible,” shared Elder Patrick Kearon.

Adding, “Joy here is just the beginning of joy to come.”

You can watch the full First Presidency Christmas Devotional in the video below.