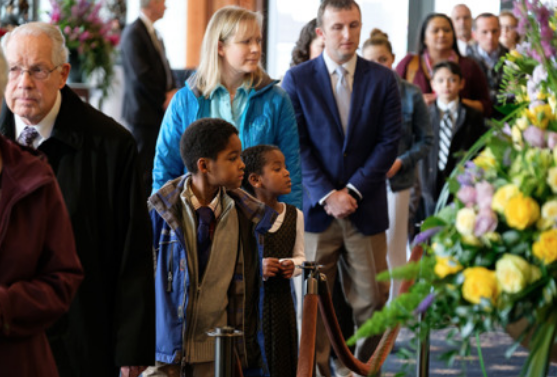 The following was written by Scott Taylor for the Deseret News. To read the full article, click here.

The viewing, held in the Conference Center’s Hall of Prophets, began with doors opening at 7 a.m.; church employees were granted an early slot to pay their respects and were joined by others from the public who arrived early. Many general authorities and church leaders also were early guests at the viewing.

Public hours were scheduled from 9 a.m. to 8 p.m., with tens of thousands of all ages expected to file through the hall and past President Monson’s casket.

President Monson, who was just a month shy of a full decade as the 16th president of The Church of Jesus Christ of Latter-day Saints and who at 54 years was one of the Mormon faith’s longest-serving general authorities, died from causes incident to age on Tuesday, Jan. 2, in his Salt Lake City home at the age of 90.

For many of the children and youth, President Monson was the only LDS church president they had known.