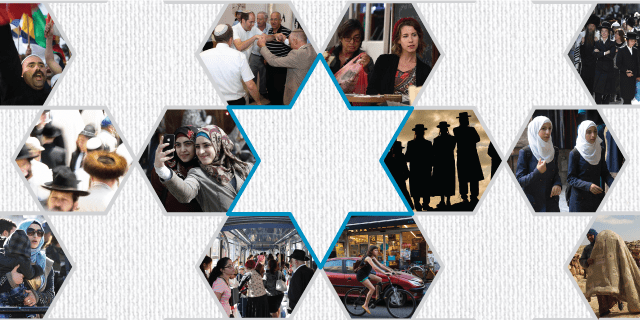 The following is a report from PEW RESEARCH. To see the full report, click here.

WASHINGTON, D.C. / TEL AVIV (March 8, 2016) – Nearly 70 years after the establishment of the modern state of Israel, its Jewish population remains united behind the idea that Israel is a homeland for the Jewish people and a necessary refuge from rising anti-Semitism around the globe. But alongside these sources of unity, a major new Pew Research Center survey also finds deep divisions in Israeli society – not only between Israeli Jews and the country’s Arab minority, but also among the religious subgroups that make up Israeli Jewry.

Although they live in the same small country and share many traditions, highly religious and secular Jews inhabit largely separate social worlds, with relatively few close friends outside their own groups and little intermarriage. In fact, the survey finds that secular Jews in Israel are more uncomfortable with the notion that a child of theirs might someday marry an ultra-Orthodox Jew than they are with the prospect of their child marrying a Christian.

Moreover, these divisions are reflected in starkly contrasting positions on many public policy questions covered in the survey, including marriage, divorce, religious conversion, military conscription, gender segregation and public transportation.

Most Jews across the religious spectrum agree in principle that Israel can be both a democracy and a Jewish state. But they are at odds about what should happen, in practice, if democratic decision-making collides with Jewish law (halakha). The vast majority of secular Jews (89%) say democratic principles should take precedence over religious law; just 1% of Hilonim would yield to halakha. By contrast, 89% of ultra-Orthodox Jews say religious law should take priority; just 3% of Haredim would defer to democratic principles.

While most Israelis are Jewish, a growing share (currently about one-in-five adults) belongs to other religious groups. Most non-Jewish residents of Israel are ethnically Arab and identify, religiously, as Muslims, Christians or Druze. The Pew Research Center survey, unlike many previous surveys in Israel, interviewed sufficiently large numbers of respondents to be able to separately analyze the views of Muslims, Christians and Druze.

The survey shows that many Muslims and Christians support the application of their own religious law to their communities. Fully 58% of Muslims favor enshrining sharia as official law for Muslims in Israel, and 55% of Christians favor making the Bible the law of the land for Christians. Overall, roughly eight-in-ten Israeli Arabs (79%) say there is a lot of discrimination in Israeli society against Muslims, who are by far the biggest of the religious minorities. On this issue, Jews take the opposite view; the vast majority (74%) says they do not see much discrimination against Muslims in Israel.

At the same time, Jewish public opinion is divided on whether Israel can serve as a homeland for Jews while also accommodating the country’s Arab minority. Nearly half of Israeli Jews say Arabs should be expelled or transferred from Israel, including roughly one-in-five Jewish adults who strongly agree with this position.

The divisions between Jews and Arabs also are reflected in their views on the peace process. In recent years, Arabs in Israel have become increasingly doubtful that a way can be found for Israel and an independent Palestinian state to coexist peacefully. As recently as 2013, roughly three-quarters of Israeli Arabs (74%) said a peaceful two-state solution was possible. As of early 2015, 50% say such an outcome is possible.

Israeli Arabs are highly skeptical about the sincerity of the Israeli government’s seeking a peace agreement, while Israeli Jews are highly skeptical about the sincerity of Palestinian leaders. But there is plenty of distrust to go around: Fully 40% of Israeli Jews also say their own government is not making a sincere effort toward peace, and an equal share of Israeli Arabs say the same about Palestinian leaders.

These are some of the key findings of Pew Research Center’s comprehensive survey of religion in Israel, which was conducted through face-to-face interviews in Hebrew, Arabic and Russian among 5,601 Israeli adults (ages 18 and older) from October 2014 through May 2015. The survey uses the Israeli Central Bureau of Statistics’ definition of the Israeli population, which includes Jews living in the West Bank as well as Arab residents of East Jerusalem.

The survey probes Israelis’ religious identification, beliefs and practices; views on democracy and religion’s role in public life; moral values and life goals; perceptions about discrimination; views on intermarriage; and attitudes toward politics and the peace process.

Using data from Pew Research Center’s 2013 study “A Portrait of Jewish Americans,” the report also makes comparisons between Jews in Israel and the United States. There are deep connections between the world’s two largest Jewish populations, but also some key differences. For instance, Israeli Jews overall are more religiously observant than U.S. Jews. Politically, American Jews are more optimistic about the possibility of a peaceful two-state solution and more negative about Jewish settlements in the West Bank than are Israeli Jews.

Together, the current study and the previously published survey of Jewish Americans provide an in-depth look at the religious beliefs, values and social and political views of an estimated 80% of the world’s Jewish population. These studies, funded by The Pew Charitable Trusts and the Neubauer Family Foundation, are part of a larger effort by Pew Research Center to understand religious change and its impact on societies around the world.