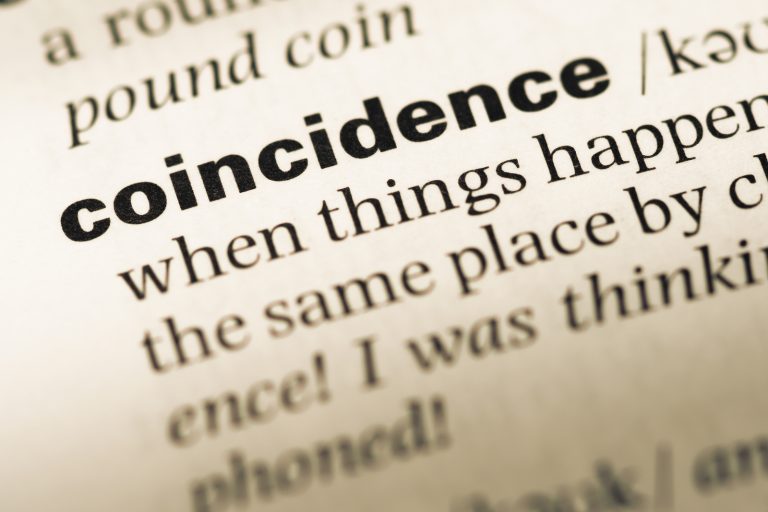 A few weeks ago I wrote an article for Meridian Magazine, and sent it in. That Sunday morning in Ward Council, our Bishop spoke about the exact same topic, even quoting the same scriptural passage I had used. Of course he had no way of knowing about my article yet. Coincidence?

A woman prayed for help in her troubled life, dreamed of two men in white shirts teaching her, and the next day two missionaries showed up at her door.

A group of Chinese visitors from a remote province wanted to tour a temple open house, and an LDS speaker of their very dialect drove up at that very instant, parked, and was able to serve as a guide.

A girl from a remote area of Europe wrote to Mormon.org and just happened to reach a returned missionary from that same place.

A man prayed to find Christ’s true church, and elders rang his doorbell before he even closed his prayer.

A sorrowing man, convinced he never really pleased his father, traveled to another country. There he miraculously bumped into an old employee of his deceased dad’s, and learned how often his dad had bragged about him to others. He realized his father really was proud of him after all.

Hundreds of such moments happen every day, all around the world. You’ve no doubt experienced them, as well. And all too often we chalk them up to coincidence. I even wonder if Satan caused us to coin that word, to deflect us from considering God’s hand in these remarkable occurrences. The woman you spoke with in an elevator, the young family at the supermarket, the businessman on a train—were they placed in your path for a reason?

I was walking to the beach not long ago with three nonmember girlfriends. I struck up a conversation with a man nearby, and soon he was telling me that his wife was a less-active Mormon, but that missionaries stopped by from time to time. I urged him to invite them for dinner, then gestured to the crowd on the beach. “Of everyone here,” I said, “you met me. You have to know that’s not a coincidence.”

My friends were stunned when I told them I felt prompted to speak with him, that I knew he or his wife was a member. “Don’t you think that’s an amazing coincidence?” they asked.

No. I think these moments swirl about us almost constantly. We just have to tune in and recognize them, and stop assigning them to luck or fate.

I wrote an article about a man I “coincidentally” met at the groundbreaking of the Sacramento Temple, another about a woman I “coincidentally” met on an airplane, and another about a woman who was about to take her own life, but our presidency arrived to visit at exactly the right time. And I’m not alone in this; these moments happen to all of us.

Recently a Meridian Magazine article told of a woman who brought a gift of San Francisco Wharf crab and bread to a woman in their ward who was grieving the loss of her husband. The gift was given exactly on their anniversary, and it was the gift her husband had always brought her on that date. Similarly, I went to visit an aunt on her 90th birthday and felt prompted to bring a single red rose. I had no idea that her deceased husband always brought her a single red rose on every birthday.

Relief Society Presidents have felt inspired to pair certain women up in the church’s Visiting Teaching program, only to hear later of an incredible connection they have with one another. It’s a connection they couldn’t have known, but which was vital for each one of them.

When a dear friend’s husband died, one sister felt prompted to call her within minutes. She was stunned that this woman “just happened” to call then. But these kinds of moments happen with regularity when we allow ourselves to be guided. My bishop urges us all to pray, “Who needs my help?” and then contact the person whose face comes to mind. Coincidence or prompting?

So often our lives take twists we can’t understand, until we realize we’re talking with someone who needs us at precisely that moment. We just need to realize how invested the Lord is in every one of our lives, and how often we are led—or someone is led to us. I don’t believe these are coincidences, but invitations to work hand in hand with the Lord.

I was a Institute Director for the most part of 30 years and very early on taught that there is no such thing as a coincidence as define by the world. God's plan for each of us is perfect. Even though we use our agency and He does not make us do anything . He was able to design our plans to interact in a perfect way because his knowledge of past, present and "future." His powers and perfection is way beyond our comprehension.

You are familiar with Albert Einstein's quote, "Coincidence is God's way of remaining anonymous." , right?