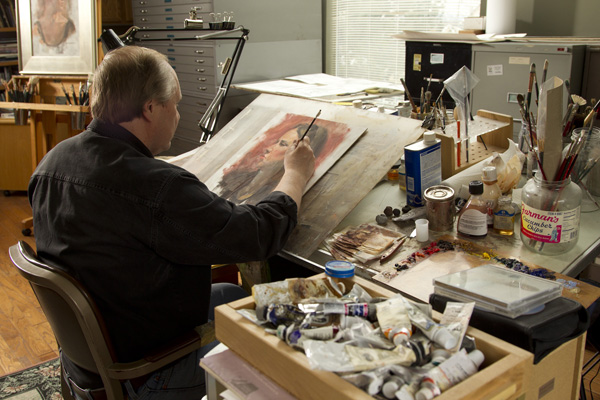 When BYU art professor Robert Barrett was commissioned to paint the portrait of Thomas S. Monson, it wasn’t the first time he’d sat down with a president of The Church of Jesus Christ of Latter-day Saints.

He’d met Spencer W. Kimball, Ezra Taft Benson and Howard W. Hunter in previous years. But none of those meetings were quite as memorable – for a potentially uncomfortable reason.

“I was sitting there in jeans and a regular shirt,” Barrett said. “I certainly wasn’t planning on being in the prophet’s office when I woke up that morning. But he put me right at ease and joked with me. He’s such a wonderful, kind man.”

That kindness shows through in Barrett’s portrait of President Monson.

In fact, he’s lost track of how many works he’s created – “I don’t know, it might be a couple thousand,” he said one afternoon, in between brush strokes on a current project. His curriculum vitae is more than 80 pages long and has anywhere from 30 to 40 projects listed on each page.

He continues to create widely recognized art as he mentors students in BYU’s Visual Arts Department, where he is currently leading the illustration program. While nurturing the talent of his students over the years, Barrett has also raised 10 children, many of whom have followed him into the arts. None of it has sapped his energy.

“I don’t think it’s exhausting to be creating; I think it’s energizing,” Barrett says. “The way I look at it, I want whatever I’m doing next to be the best project I’ve ever done.”

What that next project turns out to be is anyone’s guess. It could be a portrait commission (like the six he just finished for UVU’s past and current presidents), a book cover (like the mystery one he’s currently painting), illustrations for a children’s book (books about the Obamas he did recently) or perhaps a painting for the Church. He’s done them all.

The narrow hallway leading to the sunlit studio in his Provo home is lined – both on the walls and along the floor – with portraits and paintings many would recognize from Church materials.

Barrett’s work for the Church started more than three decades ago when he was commissioned to create a black and white illustration for the February 1978 New Era. The magazine’s editors liked it so much they decided to put it on the cover.

He’s been doing work for the Church ever since.

“It could be a single piece for the Ensign, or a cover for The Friend; or it could be a couple hundred pieces illustrating the scriptures,” he said.

His works hang in LDS Temples and Visitors Center throughout the world, and have been published regularly in Church magazines and other LDS publications.

Barrett’s list of impressive works is rivaled only by the impressive list of mentored students-turned-professionals. According to his count, more than 100 of his former students have done work for Church magazines.

Former students have gone on to work for Lucas Films, DreamWorks, Disney Features, Electronic Arts among others. Many are now teaching or heading programs at universities, such as Cal-State Fullerton and Boise State .

Many others successfully work as freelance illustrators, designers, or gallery artists.

And then there are those who have gone on to become established artists in their own right, like Chris Creek, Joseph Brickey and Amy June Bates.

“It’s neat to see how many former students are producing great work,” he said.

The talent pool of current students is not slowing any either. In 2010, Barrett was honored by the Society of Illustrators as the “Distinguished Educator in the Arts” at their annual show. Cheering on Barrett in New York were seven of his students who had been selected as finalists for the event.

For 12 years in a row now BYU has been represented by student finalists at the Society of Illustrators’ show. The show is the largest competition in the world for illustration students and professionals, and in 2011 there were 7,000 student submissions with only 130 finalists chosen.

The program just learned that eight students had work selected this year – a record number of students accepted in a single year from BYU.

Barrett says one of the great rewards of his teaching career has been celebrating with his students their successes. Achieving that success, as Barrett has, takes more than talent.

“I tell my students that motivation and drive is going to take them farther than talent,” he said. “If they decide this is what they want to do, they need to push for it. They really just have to find the love for doing it.”

For more than three decades now, Barrett has kept up that love for what he does.