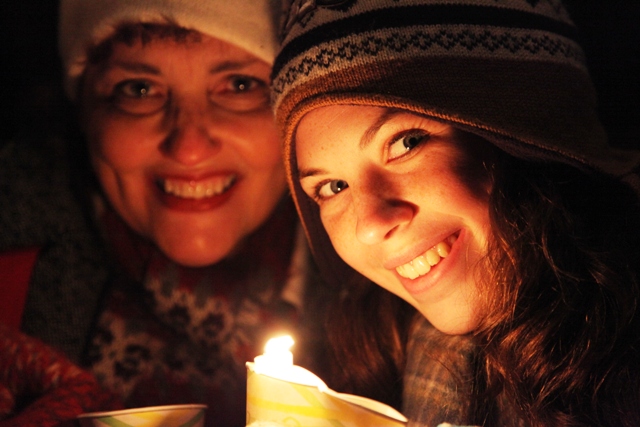 I had a pit in my stomach the first few weeks after we moved from Utah to Virginia, feeling somewhat like the baby eagles who are pushed from their cliff-high nests by their weary mothers and plummet wildly to the ground.  When I’ve seen these nature documentaries with pictures of the falling eagles, I hold my breath, frightened for their safety, “Oh, please fly.”

Leaving Utah had been like leaving a nest for me, because there I had a lifetime of friends and family, a network of support that cushioned every blow.  Grocery shopping at Macy’s always took much longer than I planned, because around each new aisle I ran into a friend, whose eyes lit with recognition, and we’d catch up.  What was the price per pound of turkey?  How are the plans for your daughter’s wedding?  Did you hear that the Perrin boy got his mission call?

It was all such sweet familiarity.  Wherever we went, we ran into old college chums, second cousins, fellow writers.   But most of all, around our kitchen table still sat eight of our children.  Yes, some of them were grown and going to college, on the verge of flight themselves, but here they still were, making us laugh at dinner, prolonging the time together at the end of each day because the conversation was so lively.

So moving after a lifetime in one place was a shock, and nowhere did I feel it more starkly than the grocery store or a school event where there were no loving greetings, no light  of recognition in the eyes of friends.  We had all suddenly become invisible;  we were ciphers surrounded by people who wouldn’t know or care if we just suddenly disappeared.

Four of our children had moved with us, while the rest, who had been at home, stayed on in Utah for college.  Those of us who had made the 2,000 mile move were feeling the shock of displacement.  “Dinner is my favorite time of the day,” our son, Andy, regularly told us.  It was a time of connection. He had been the sophomore class president in Utah, but now in a school of 4600, he was just the oddball from someplace in the West, whose standards were a little squeaky clean.

We had moved just before school started, and now with Christmas coming, I was eager to find some new seasonal traditions that would tie us to our Virginia home.  One day, I picked up the local Fairfax newspaper and scanned the listings for the upcoming Christmas events.  I landed on one I thought would be memorable.  It seemed the “President’s Own” United States Marine Band joined with several church choirs for a Holiday Sing-A-Long at  Wolf Trap, the National Park for the Performing Arts.  It was on Sunday after church, and it was free.

Here it was.  A possibility for starting a new tradition in this place that still felt so foreign, and I presented the idea to the family, who thought it sounded fun.

The day came, and we piled in our car after church still in our Sunday clothes.  Staying in our Sunday clothes had long been the Sabbath tradition in our family, and so this day as we drove to Wolf Trap, I had on a thin, wool jacket I’d worn to church; my husband, Scot, had only his suit coat, our sons had on only light coats, and our little girls had bare, thin legs sticking out of their Sunday dresses.

It was a bitterly cold day, but we envisioned finding a park, scurrying into the auditorium, and being warmed.  It was the ignorance of a newcomer.

We drove into the massive parking lot, jammed with cars, and as we looked around at other families, we could see immediately that something was wrong.  They were bundled up like Arctic trappers.  Woolen hats pulled over their ears; tasseled, knitted scarves around their necks, quilts and blankets bundled around them.  They wore gloves and carried steaming jugs of hot chocolate.  They stamped across the parking lot in fur-lined boots.

What I hadn’t known and didn’t entirely realize until we were right at the entrance was that Wolf Trap was an outdoor pavilion.  It had a beautiful stage festooned with 10-foot wreathes, a roof that sloped up covering the rows of seats, but it was unheated and the sides were open so the chilling breeze came through, ruddying up the cheeks of the singers and quickly numbing any exposed fingers until they ached.

Virginia can have some temperate days in the winter, but this wasn’t one of those.  In all the years we have since gone to Wolf Trap, no year has seen such a biting temperature that gnawed at our warm flesh, freezing our extremities, stiffening our arms and legs.

You’d think at that point we’d wise up and leave, but the band in their bright, red uniforms and brass buttons were playing a piece of the Nutcracker, that delighted the senses.  We’d been given a book with the words to the carols that the audience would soon be joining in to sing.  We had looked forward to this Christmas outing to have a new tradition in our family, so needy to connect in our new community.

We were part way through singing, “Joy to the World”, singing at the top of our lungs, because in the mass of singers in the audience, no one could hear our mistakes or faltering voices.  We were singing like a concourse of angels, singing like our voices could roll across the entire earth, inviting the rocks and stones to arise and join us.   We were people of all faiths, but we loved why we had come to sing.

Joy to the world

The Lord is come

Suddenly the people two rows in front of us passed up a blanket.  “We see you’re cold,” they said.  How could they have noticed?  Did they have eyes in the back of their heads?  Was this icy night a good time to give up an extra blanket?  They did more.

“Our gloves have liners.  It makes it like two pairs of gloves.”  They passed up their glove liners and then our hands were warmed.

Others chipped in.  All around us people were passing “extra”  hats and scarves our direction.  “You might need this,” they said.  “Does this help?” Before the next song, we were bundled up with donations from people all around us.

We all stood together for the chorus from Handel’s Messiah.  “Hallelujah, Hallelujah.”  I felt as one with everyone around me.  There were no more strangers. All these people I didn’t know were shouting the same praises I felt, “Hallelujah, Hallelujah. For the Lord, God, omnipotent reigneth.”  Bundled up in our nearest neighbors’ blankets and hats, I felt as warm as I ever had.

The last song was “Silent Night” and the Wolf Trap tradition is for each person to light a candle on the last verse and exit in a reverent recessional, the pool of candles a glow against the early darkness of a winter night.  As we passed back our borrowed things with our gratitude, everyone around us was lighting their candle.

We joined the sea of people exiting the arena and moving out on to the lawn, shorn back to our thin coats.  My husband, Scot, carried our five-year-old, Michaela, her pale, thin legs sticking out from her dress, exposed now to even colder air.  She has always been a wisp, who in years to come would make as her New Year’s resolution with little conviction, “Eat more, maybe.”  This night her legs looked and felt like scrawny icicles.

Suddenly out of the darkness as we walked along, a woman came up and wrapped a green blanket around those naked legs.  Warmth made her snuggle closer to her Daddy, and I said to the kind woman, “Thank you so much. We’ll follow you to your car, and return your blanket.”

In the darkness, I didn’t see her face clearly.  I didn’t get her name, before she moved back into the flowing crowd.

Michaela stayed bundled in the blanket all the way home.  She slept with it that night and gave it a name.  It became her “kindness blanket.”  She slept with it for years to come, and the funny thing was, so did I.  So did all of us.  We slept each night and rose each day with the memory of the kindness of strangers whose faces we don’t know and names we didn’t learn who wanted to keep us warm against an icy night.

I had been wrong all along.  Our new home wasn’t filled with strangers—just friends we hadn’t met yet. It was the beginning of making Virginia our home.