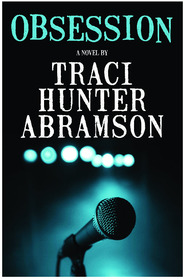 This review begins with a friendly warning.  Don’t start Traci Hunter Abramson’s new book, Obsession, late at night if you aren’t into staying up all night.  She hasn’t left any good places to stick in a bookmark, set it down, and wait until morning to finish it.

This book is only vaguely connected to the Saint Squad series through the FBI agent Charlie Whitmore, son of Senator Whitmore who, along with other members of his family, has been a strong character in that series.  It is a definite stand-alone story.

Charlie is assigned as an undercover bodyguard to pop singer Kendra Blake, after an explosion rocks the final concert of her tour.  She flees California to her grandfather in Phoenix to avoid the smothering security her famous actor father is determined to foist on her.  All of her life and particularly since she was a teenager, he has insisted on a troupe of bodyguards dogging her every move.  Only since her own career rocketed to super-stardom has she become brave enough to move out of the family home, employ only one bodyguard, and attempt to live a life of her own.

Understanding Kendra’s need for privacy, but as a retired FBI agent, her grandfather is well aware of the danger she faces and the need to protect her.  He sends her to a mountain cabin and arranges for an FBI agent, Charlie Whitmore, to pose as a vacationing attorney staying in the cabin across the road from her.

An unexpected spring blizzard maroons the cabins and sets in place a need for the two to help each other in order to survive.  Though strongly attracted to each other, Charlie is reluctant to get involved with someone he is assigned to protect.  Besides, it would violate FBI rules to do so.  Kendra has been so protected from the real world that she doesn’t know what to expect from Charlie and is confused by his mixed signals.

A serial killer is on the loose and the evidence points to the killer being obsessed with Kendra and the likelihood that she is his next target.  The previous murder victims all bore a strong resemblance to Kendra.  Were they a frustrated killer’s vicarious attacks against her?  Who can be trusted?  The boys in her band?  A former boyfriend of short duration who got in a fight with one of her bodyguards and landed in jail?  Her overly protective father?

Abramson brings an element of authenticity to both crime scenes and to law enforcement procedures and policies.  Her own stint working for the Central Intelligence Agency left her with experience and contacts that enrich her work.  It may also account for her close attention to and research into backgrounds and personality quirks.

Kendra is an interesting character who chafes at the tight strictures placed on her life by an overly protective father, frightened by threatening letters sent to his daughter when she was little more than a child.  She relishes the time spent with her grandparents whenever her famous father was on tour while she was growing up and values the religious training she received in their home.

In her early twenties and a successful pop star, she has fought hard to reduce the number of security guards around her, have her own home, and take charge of her life. We see her grow and take on a greater level of maturity as the story progresses and can sympathize with her when her desire for independence wars with her fears.

Charlie shares some of Kendra’s hang-ups since he too, grew up in a glass cage as the son of a famous senator.  In some ways he is running away as well — from a disastrous breakup with his former fiancée, a family that is a little too smothering, expectations or coddling because of who his father is, and a partner who is crippled for life because he took a bullet meant for Charlie.  He takes his work seriously and wants to succeed on his own merits.  He grows, too, and discovers what matters most to him.

Secondary characters are also well drawn and distinctive.  The plot is gripping; the clues are all there, but even long time mystery fans will be left wondering who the killer is almost as long as Charlie. The romance is satisfying and low key.

Traci Abramson became a popular mystery/suspense writer on the LDS fiction front almost immediately when her first novels, the Undercurrents trilogy, burst onto the scene.  They were quickly followed by Royal Target, and the Saint Squad series.

She and her husband, along with their four children, live in Virginia.  Originally from Arizona, she graduated from Brigham Young University, then went to work for the CIA. (She’s not allowed to talk about her years there.) After leaving the CIA she became a high school swim coach and avid supporter of her children’s activities along with doing church service, cooking, and of course, writing.