Baseball season is here and so are many other fun outdoor sports. Here is a great assortment of sports books to enjoy. The first six books are good for ages nine and up. The next two books are early chapter books geared for ages seven to ten. The rest are picture books for all ages to enjoy. 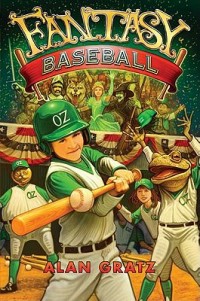 Fantasy Baseball, by Gratz, isn’t your typical baseball story.  Alex has a great talent for playing baseball. But when he finds himself in the land of “Ever After”, he thinks he must be asleep. He begins playing in an exciting tournament where other players are a combination of characters from “The Wizard of Oz” and other well recognized tales and the story heightens to a dramatic turn of events when the game becomes close. Could this all just be a dream?

THE BATBOY, by Mike Lupica, is another engaging story by this beloved sports author. Fourteen year old Brian has just been chosen to be the batboy for his hometown major league team. He’s thrilled to be able to be around some of the league’s best players. But what he wants mostly is to be able to reconnect with his major league father who left his family long ago for baseball. And now his father, who was banned from baseball because of steroid use, is making a comeback and begins to reconnect with Alex. This story is strong on the importance of family relationships.

Sluggers: Home of the Brave, by Loren Long, is book six, and the final book in this exciting series. All of the mysterious and magical events that lead up to this book are answered as the Travelin’ Nine team heads back to Baltimore where they play their final game. The questions about a magical baseball are finally answered. The map at the front of the book shows their travels while they played ball, and some great charcoal etchings by the author are sprinkled throughout.

Hothead, by Cal Ripken Jr., has much to teach us concerning the pressures of team sports. Connor Sullivan is an All Star baseball player who has a chance to be invited to a prestigious camp. But his temper is getting the best of him and he may lose the chance to go. He has some difficulties at home, with his father out of work, and the financial pressures are affecting Connor in all aspects of his life.  Hall of Famer Ripken enlightens readers about the pressures of playing ball. Watch for more insightful books in this series by Cal. 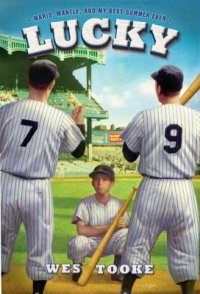 Lucky, by Wes Tooke, is about twelve-year-old Louis who loves the game of baseball but doesn’t play it very well. The year is 1961 and he feels unlucky. His stepbrother is an excellent athlete and he’s bullied by the neighborhood kids. But his life is about to become lucky when he catches a foul ball hit by the Yankees’ Roger Maris and saves the game.  He’s asked to be their batboy and from there he watches Mickey Mantle and other greats make history. You’ll find yourself lucky just reading this book. 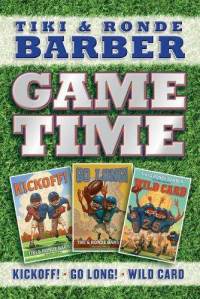 Former NFL players, Tiki and Ronde Barber, have authored several early chapter books that are centered around playing football. The Game Time Boxed set has three books that follow the authors as they play on their junior high team. Red Zone is another new book by the authors and all include the importance of team work and helping each other on and off the field.

Kickers #4: Game-Day Jitters, by Rich Wallace, and illustrated by Jimmy Holder, follows fourth grader, Ben, and his soccer team as they approach the Kickers League playoffs. He is a great soccer player, but he has one big problem: he gets game day jitters. This interesting and exciting short read will keep kids captivated as they find out if Ben can somehow keep his cool. The other three books (The Ball Hogs Kickers, Fake Out Kickers and Kickers Benched) in this series are just as good. 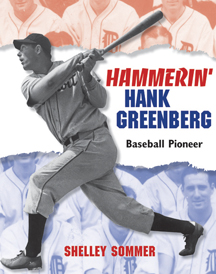 Hammerin’ Hank Greenberg, by Shelly Sommer, is an interesting non-fiction account about this Hall of Famer’s life and success on and off the baseball field. Greenberg was a most talented baseball star who faced discrimination due to being Jewish. All that he accomplished is included here as well as interesting photos and documents throughout.

This is the Game, by Diane Z. Shore, is a lyrical book rich in rhyme and pictures. But more than the visual and poetic manner, it’s a celebration in the spirit of the game. You can almost hear the crack of the bat and smell the grass. No wonder it’s called America’s favorite past-time!

She Loved Baseball: The Effa Manley Story, by Audrey Vernick, is a true account about a woman who was the first and only woman inducted into the Baseball Hall of Fame. She, and her husband, owned the Brooklyn Eagles and helped break down the color barrier. 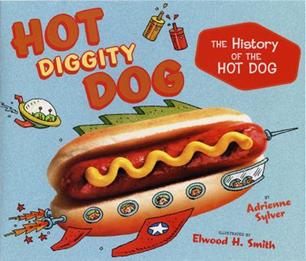 And lastly, how can we enjoy a good baseball game without a hot dog?  Hot Diggity Dog, by Adrienne Sylver, gives an enjoyable account of the history about this interesting frank. The trivia, and cartoon drawings, by Smith, relishes the dogs and buns with links to royalty and poverty. So next time you sing “Take Me Out to the Ballgame”, you’ll know more than ever about the food in your hand!