A little more than twenty years have passed since Chris Heimerdinger began his epic Tennis Shoes Adventure Series.  The series began with a Young Adult focus, but as Heimerdinger’s fans as well as his characters have grown and matured over the years, the series has become more oriented toward adult readers.  That isn’t to say adults didn’t read his early books or that teens will ignore his latest, Sorcerers and Seers, the eleventh volume in the series.  Though this volume is being marketed toward adults, the author knows it will be read by teens as well, and suggests parents and leaders discuss troubling aspects with younger teens. 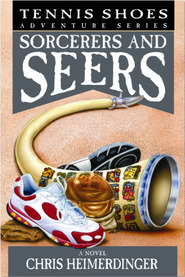 This volume divides the intrepid time travelers among three major pivotal times; the events leading up to the final battles of the dysfunctional Jaredite royal family, the final Nephite/Lamanite war, and the last Passover Jesus celebrated in Jerusalem.  All three eras were times of excessive hate, greed, and violence which created a quandary for Heimerdinger as he strived for honesty without subjecting readers to excessive violence.

The times depicted were periods when brutality was a major aspect of the events that unfolded and, in my opinion, Heimerdinger did a sound job of making the reader aware, disgusted, and saddened by the terrible events that took place without wallowing in what another writer might have sensationalized.

Jim and his sister, Jenny, after following a false Christ, witness the triumphal entry of Jesus into Jerusalem.  In the crowd Jim spots his infant son, but before he can reach him, he is knocked unconscious.  When he awakens, he is in the home of Jesus’s friends, surrounded by His family.  Mistaking Judas for a well-meaning disciple, Jim accompanies him to the upper city, where disaster befalls him.  He is left to struggle with his loyalty to the Savior and his desperate need to find his wife and child.

Joshua and Marcos attempt to hide the golden plates before the Lamanites attack the Nephite stronghold.  When the plates are stolen and a terrible bargain is struck with Akish, the sorcerer, Joshua is left to fight the voice of Akish’s evil sword and trust the Liahona and have faith in God as he attempts to recover the sacred record.  Caught in a time warp, they find themselves at the mercy of an Amazon-like tribe of Jaredite women led by the old king, Omer, and embroiled in the evil machinations between Omer’s children and Akish, his wife, and their children.

Moroni and a contingent of the time travelers proceed toward Cumorah and are attacked by a mysterious ghostlike army.  One of the group is killed and three others are so seriously wounded it is questionable whether they will survive to reach Cumorah.  Once the survivors reach Mormon’s fortifications, they are joined by Garth, and all become involved in preparations for the great battle.  They are appalled by the depravity of the Nephites, Lamanites, and the Gadianton Robbers who align themselves with the Lamanites.

This entire series is a blend of scriptural history and speculative fiction, but Heimerdinger is careful to point out in his chapter notes where history leaves off and imagination begins.  The story is fascinating reading and brings to life ancient people, but to me the chapter notes, which are well documented, is the best part of the book.  I don’t always agree with the author’s descriptions of historical and geographical points or people, but I commend him for the honesty of his work and his willingness to concede that some details just aren’t explained well or in enough detail in the scriptures, making one person’s mental image as valid as another’s.  Not only has he carefully studied scriptural accounts, but has examined the work of both LDS and non-LDS archeologists, Mesoamerican scholars, and scriptorians.

The time travelers adventures are exciting and skillfully written.  Though the plot is determined to a large extent by historical facts, the plot and subplots within that historical framework are innovative and filled with suspense.  Though there is a large cast of characters and some have similar names, they are such distinct personalities, there is seldom any confusion for the reader concerning them.  For such a large work, there are amazingly few typos or other copy errors.

Most novels have a good versus evil element to their stories, but Heimerdinger carries this theme even further to righteousness versus the arts of darkness.  And he does it without leaving the reader feeling like he is being preached to or wading through the occult.

It’s hard to explain how it can happen in a novel based on historical facts, but this novel has a serious cliff-hanger ending.  Obviously there is going to be a Volume twelve.  I’ll be looking forward to it.

Sorcerers and Seers is Heimerdinger’s eighteenth book.  He has also written and produced a feature film entitled Passage to Zarahemla and a song album based on the movie.  He has ten children and he and his wife life in the Salt Lake area.