Here is my last installment of great summer books for kids nine and older. This list includes a nice blend of different genres that includes mystery, fantasy, humor and historical fiction and all of these books are page-turners that your kids will love. They are also perfect for your reluctant reader, who may well see the value of such books!

Fish, by Gregory Mone, is a swashbuckling adventure about twelve-year-old Fish, who ends up on a pirate ship. (He’s named Fish because he swims with incredible skill.) One of the shipmates stole a valuable purse he was conveying for his uncle and Fish chases him onto the ship. The ship sets sail and Fish now finds himself at sea and working on this ship. He also discovers that this purse holds the key to finding hidden treasure.

Complications arise when the crew attempts to mutiny and Fish saves the day with courage and wit by supporting the captain. He does all this without lifting a weapon or hurting anyone. He also saves lives at sea. Then he and his companions go about to discover that treasure. This page-turner might keep you and your family up late reading.

News for Dogs, by Lois Duncan, features two siblings, Bruce and Andi, who are starting a newspaper for dogs because Andi loves writing poems and recipes for dogs. A mystery evolves when pets begin disappearing and Bruce and Andi have to figure out who is dog-napping these canines. The story celebrates good wholesome reading that showcases responsibility and family.

The 13th Reality: The Hunt for Dark Infinity, by James Dashner, is a well written adventure that takes Tick and his friends into another reality. This is the second installment of The 13th Reality, but the first book isn’t a necessity to be instantly drawn into the complex mystery as the protagonist attempts to save all from near disaster. Every calamity they face will be as exciting as if the reader is involved as well! Also, this edition has recently been published in paperback and the third installment has just been published. Click to buy.

The Cardturner, by Louis Sachar (who also wrote the bestseller Holes), might end up being one of my top favorites of this year. Seventeen-year-old Alton has just been requested by his mom to become a cardturner for his blind Uncle Lester when his uncle plays bridge. This might sound like a boring subject to write a book about, but this author has an uncanny talent to spin the most incredible tales, and make the reader become completely mesmerized.

Alton goes into this job with great reluctance because he knows nothing about the game and believes his summer is now going to be a disaster. But there are some amazing cards waiting to be dealt concerning Alton’s life, and the book will most likely not be put down until the very end.

Any Which Wall, by Laurel Snyder, and pencil etchings sprinkled throughout by Leuyen Pham, is a wonderfully told story about magic and imagination. When four friends come upon a most unusual wall right in the middle of a cornfield, they don’t know what to think. But they soon discover that this wall is a wishing wall that will grant wishes to take any who find it to magical places and different periods of time. It doesn’t take long for each child to learn much from these wishes and grow up a little as well. This is a delightful and fun read for a hot summer afternoon. 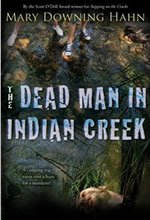 The Dead Man in Indian Creek, by Mary Downing Hahn, is one of those great mysteries that readers will not want to stop reading until it’s solved. Matt and his buddy, Parker, just discovered a body in Indian Creek. Now they wonder if the new boyfriend of Parker’s mom has something to do with it. What they soon discover will have you reading clear to the end to figure out whodunit. Click to buy.

Northward to the Moon, by Polly Horvath, will take you on a trip across your memories where you’ll see landscapes of hills and valleys full of trees and reflections and moonlight on darkened water. Thirteen-year-old Jane is on a road trip with her family because her stepdad has lost his job in Canada. As they travel great distances to see a dying friend, they learn much about each other – and life.

This is a beautifully written story that celebrates strong relationships.

The Wish Stealers, by Tracy Trivas, has sixth grader Griffin unknowingly accepting 11 shiny pennies and finding that she now has a terrible curse bestowed upon her. These pennies were actually stolen from a fountain long ago, and now all of her good wishes don’t happen – just evil ones. But she ultimately overcomes all by reversing this curse and triumphantly overcoming the evil brought on by the curse.

Faith, Hope, and Ivy June, by Phyllis Reynolds Naylor, is also going to be right up on the top of my favorite books for the year. This story reminds me of the Country Mouse and the City Mouse, where each goes to the other’s home and finds it so different from its own. Ivy June is from a poor community in the Appalachian Mountains and Catherine lives in a rich area of town. Both girls are involved in a school exchange program where each will spend two weeks living at the other’s home. There is so much hope and faith to glean from in this book that it may just make you cry. Click to buy

Chasing Orion, by Kathryn Lasky, is another book to top my list. (Actually, all of these books are great, which makes selecting the top ones really hard.) Eleven-year-old Georgie has been told she can’t go anywhere where there are lots of people, including the swimming pool, for fear of catching the ever growing epidemic of polio. Her teenage neighbor, Phyllis, lies dormant in an iron lung and Georgie struggles with her difficulty. The year is 1952, and the serious questions raised, as well as the beautifully written story full of allegories and symbolism, make this a wonderful book.

Matisse on the Loose, by Georgia Bragg, is a funny story about eleven-year-old Matisse, who tells the story from his vantage point. His mother is in charge of security for a local art museum. There is to be a painting exhibit of the famous Henri Matisse. It all turns into quite a fiasco when young Matisse trades the real painting for his own copy. What happens, and who is caught red-handed, will make you laugh out loud. Don’t forget to check out the author’s note found at the back, with interesting background information about this great artist.

Born to Fly, by Michael Ferrari, is an exciting historical fiction based in World War II, when eleven-year-old Birdie lives in a small Rhode Island town. She feels destined to fly a plane as she watches her father work on planes as a mechanic. Then she sees an enemy submarine in the bay but no one will believe her. But she is about to become part of a mystery when she attempts to take a picture of it. There is much to learn about this period of time, but more interesting are the events that surround Birdie as she is about to save many lives due to her passion for flying.