NORTH OGDEN, Utah — Forty young members of The Church of Jesus Christ of Latter-day Saints have renovated a neighbor’s house in North Ogden, Utah. They and their youth leaders gave more than 5,000 hours of volunteer service to upgrade the McKinley family’s home.

Normally, the teens in the Mountain Ward hold a weekend youth conference each year that involves various activities such as dances and sporting events as well as community service and educational and church meetings. This year, the young people decided to forego the standard youth conference format and replace it with a week-long service project — responding to a need in their neighborhood. 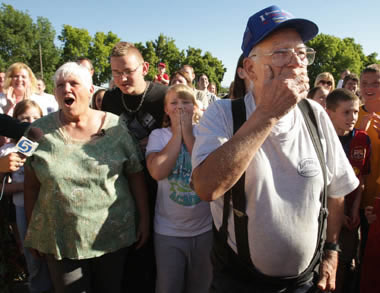 Members of the McKinley family express surprise as they return to their home, which was renovated last week by a Mormon youth group in North Ogden, Utah. © Jeff Allred, Deseret News

The 63-year-old house the youth renovated, built by the United States Department of Defense, is home to Earl and Lynda McKinley and three of their grandchildren, ages 9 to 16. At one point the McKinleys added a second story and a carport but were never able to finish the house, despite working two full-time jobs — Earl at night and Lynda during the day.

For seven days, beginning at 8:00 a.m., the young people and their leaders converged on the makeover house. Each day, as the demolition and construction progressed, neighbors and others joined the energetic youth.

The young workers remodeled the bedrooms, a laundry, the halls and the stairs. Inspired by the teens’ efforts, a local businessman donated an air conditioning system; another gave appliances; and yet another, the yard’s sprinkling system. New furnishings were also provided.

Michael Sjoblom, 14, admits to being somewhat apprehensive as the plans for the conference unfolded. “I really didn’t think we could do so much work, but then I wondered if the family would trust a bunch of kids to fix up their house.”

Sixteen-year-old Rachel Bowler helped attach the rock trim to the front of the house. “We had to go step by step — tarpaper, chicken wire and then mud to hold the rocks on the house. Then we had to grout between all the rocks. I’d never done anything like that before,” Bowler said, “but in the end it looked like professional work and we were proud of our efforts.”

“It was our best youth conference ever,” said the youths’ bishop, Nader Mikhail. “Not only was a house transformed, but the lives of our youth have been transformed by the service.”

Thousands of Mormon youth conferences are held each year worldwide. Most of them have a community service component. Latter-day Saint teenagers in Finland will participate this weekend in a Mormon Helping Hands community service project in the city of Oulu.

Youth from Hyde Park and Romford, England, recently collected resources and assembled over 300 hygiene and stationery kits for the charity Jigsaw4u, which works with orphaned children and children with AIDS.

Young Mormons in Tarlac, the Philippines, recently provided manpower to assist in a reforestation project, and youth in Iloilo, also in the Philippines, spent a day playing and reading with children in a local orphanage.

This article was prepared by the LDS Newsroom at lds.org.