Books with Good Advice for the End of the School Year

Books are always great presents for celebrating the end of the school year whether it’s the end of one grade or progressing on to the next level, or building to prepare for the coming year. Here are some excellent books to help all ages become better adults. 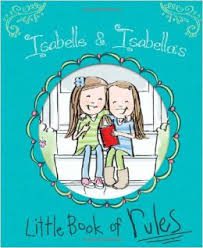 Isabelle & Isabella’s Little Book of Rules, by Isabelle Busath and Isabella Thordsen, and illustrated by Priscilla Burris, is just what the title says: a book of rules. But this book is actually written in the handwriting of these two authors. Ten-year-old Isabelle and her friend, eight-year-old Isabella, had been writing all the rules surrounding their young lives in a notebook. When they accidentally left the notebook at a bookstore and a clerk who found it posted it online, that’s when their small notebook took off. Most of the rules are helpful, like “Say Excuse Me” and “Do what your parents ask you to do”, but some are just funny, like “Don’t color on people” and “Don’t bite the dentist”. The clever illustrations reflect the penmanship of these young girls making this a delight to read and discuss with other family members.

The 7 Habits of Happy Kids, by Sean Covey, and illustrated by Stacy Curtis, has recently published the habit 6 book and the habit 7 book. Habit 6, “Sophie and the Perfect Poem”, teaches that everyone is unique and that we can use these differences to achieve success as a team. The teacher in Sophie’s class has just assigned the class a poem to work on in teams of two. But Sophie doesn’t like her partner because she thinks he’s mean. She’s surprised that they both have much in common and they’re able to work well together. So the habit here is “Synergize”. In the last habit book, “Goob and his Grandpa”, Goob feels sad after losing his grandfather. But his friends rally around him helping him do things he loves to do. This teaches us that there are devices to help us all when life is sad or tough. “Sharpen the Saw” is the habit meaning finding a balance between mind, heart, body and soul.

Laugh-Along Lessons, by Helen Lester, and illustrated by Lynn Munsinger, is a series of smallish sized picture books that teach important life lessons for youngsters ages three to seven. “Princess Penelope’s Parrot” teaches the importance of being wise with your words. Princess Penelope has received a parrot for a birthday present. But the bird doesn’t talk so she proceeds to say mean things to it as she is upset that it’s not talking. It all backfires when she meets a prince that she’s interested in. She opens her mouth to say something, but the parrot, who is hiding, mimics her cruel words to the prince. He thinks she’s saying these words to him and he ends up leaving. The paintings by Munsinger are a delight of watercolor. “Hurty Feelings” deals with feeling good about yourself. Fragility is a high-strung hippo who becomes hurt with almost any comment that comes her way. But when Rudy, a big bully elephant, bullies his way into her, she can hardly get a word out to stand up for herself. When she finally does, her perspective of herself and how she feels is a great lesson.

Little Burro, by Jim Arnosky, is a helpful picture book that teaches youngsters the importance of accepting change. Little Burro loves where he lives in the comfort of his familiar canyon. But when his mother and the rest of the band of wild burrows leave this safe haven, he must follow. But as he walks along unfamiliar paths and surroundings, he realizes he likes what he sees. When they reach a nearby lake he finds he loves this new place also. When the band begins to head back, he now finds himself hesitant to leave. The acrylic and white chalk used throughout beautifully portrays the wide variety of color and life found in the desert. 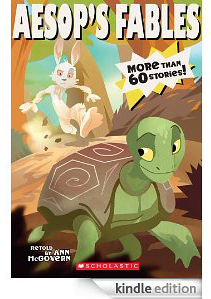 Aesop’s Fables, retold by Ann McGovern, is a small-sized paperback with more than sixty stories mostly told on one page. This is one of my favorite classics because the tales of mostly animals are brief, yet packed with a life-lesson moral at the end that we all can use in daily life. “The Ant and the Dove” has the moral: “One good turn deserves another.” “The Fox and the Grapes” teach the moral: “It is easy to speak badly about what you cannot have.” And “The Fox and the Stork” easily teaches us to: “Do unto others as you would have them do unto you.”   The illustrations, by J. A. McClaskey, fit each fable making this an easy quick read. 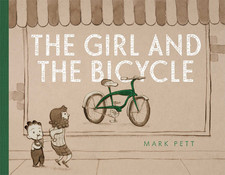 The Girl and the Bicycle, by Mark Pett, is a wordless book rich in a message that brought tears to my eyes when I initially looked through this pictured story. A girl discovers a bicycle in a window of a store as she’s walking with her toddler brother. She races home and counts her piggy-bank money and sees that there isn’t enough. She begins to do house chores but eventually she’s hired by a woman to help in the yard, in the house, shovel snow and in the garden. When she finally earns enough money to buy the bicycle, there’s a tremendous lesson of love, sacrifice and friendship waiting for all ages at the end of this wonderfully illustrated story. The drawings were made with pencil and watercolor and each page easily progresses the storyline!.