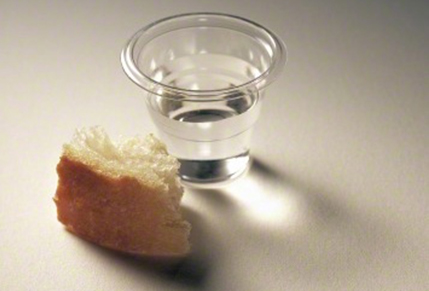 Our five children ping-ponged between our laps, shuffled around for a seat, as my husband and I pulled out books and crayons to settle our noisy crew for sacrament meeting.

It was just before the New Year and we were visiting a ward in St. George, Utah. A ward that had no primary or youth program because it was composed mostly of retired couples. No twelve-year-old deacons bumped elbows on the front row; it was the High Priests who were preparing to bless and pass the sacrament.

Normally, the ward would have gently filled the padded seats of the chapel, but on this holiday weekend, the overflow divider was pushed wide and we, with a number of other families, were nestled onto metal folding chairs that stretched to the back of the gym.

The meeting progressed as usual and I watched as a dozen older gentlemen carried trays of bread, then water, through the bursting rows. They were making great effort to manage the unusually large crowd. Their faces were kind. Some had rounded shoulders and bent spines. One wore cowboy boots. One winked at the little girl in front of us.

My daughters and I took the last cups of water on our tray and handed it to my husband, Doug, who passed the empty tray to the brother standing at the end of our row.

The Bishop stood at the pulpit to assess the situation. When he asked who had not received the water, a few pockets of people, including Doug, raised their hands. So the brethren returned to the sacrament table, offered a second prayer on new water and delivered it to the waiting members.

Our row was last to receive the water this time and I noticed that Doug offered the couple next to him the two remaining cups. The tray was empty and it appeared to me that Doug was the only one who hadn’t had the water. I wondered what he would do. Would he let it go? Not worry about it this week?

But when the Bishop asked if anyone had not received the water, Doug raised his hand. He was, as I suspected, the only one. He looked at me and we both smiled, conscious of the craned necks and curious eyes.

The brethren returned to the table for a third prayer on the water. And suddenly, as I heard that phrase, “to sanctify this water to the souls of all those who drink of it…” (Doctrine & Covenants 20:79), a realization crept into my heart. An understanding so keen it pried me clear open and God’s spirit swept in. It was a reverence I hadn’t felt in too long.

They were praying over one cup. For one person. One soul.

Hundreds of members waited for the Amen. Dozens watched as the last cup was delivered to my husband, and he put it to his lips, and drank.

I had to look away my eyes were so wet.

I looked up in time to see these sweet men in suits cover the trays with white linen. Just as Christ’s body, broken for us, was covered. Just as His Atonement covers us. All of us.

You and I are indisputably tied to Christ’s suffering. All our sins, grief, hurts, and losses are held in the drops of his blood. We, he said, are “graven upon the palms of [his] hands” (Isaiah 49:16).

I recalled a similar feeling when two young boys knelt in our living room to bless a cup of water and piece of bread for me, alone. We had just brought our tiny, premature twin boys home from the hospital, one still on oxygen, and for a few months, I was unable to attend church. Every week these shining boys knocked on our door and I knelt next to them on the hardwood floor. I was humbled they would bring the sacrament to me. That they would offer those prayers for me. For one.

The next Sunday, while sitting in our regular ward chapel, children still ping-ponging, I opened the hymn book to prepare for the sacrament. These are the words we sang:

Rev’rently and meekly now,
Let thy head most humbly bow.
Think of me, thou ransomed one;
Think what I for thee have done.
With my blood that dripped like rain,
Sweat in agony of pain,
With my body on the tree
I have ransomed even thee.

All the other sacramental hymns are written in third person, about the Savior, or in letter form, to the Savior. But this hymn is written in first person, as if the Savior is speaking directly to us. It is so tender and personal. Well worth a reading of all four verses. (Link above.)

Once again, I felt the emotion of watching Doug take the last sacrament cup. Of understanding that our Redeemer, the Mighty One of Israel, would break not just bread, but body and soul, for me. For you. As if we were the only ones that mattered.

Catherine Keddington Arveseth is a part-time writer/editor, full-time mother of five, including two sets of twins. She and her husband live in Salt Lake City, UT. She writes for Power of Moms, Segullah, and blogs at www.wildnprecious.com.

Thank you for sharing that. Very touching.

I wonder if this happened anywhere else and the Bishop didn't ask if someone hadn't gotten the bread or the water, would someone indicate that to those who were passing the trays?