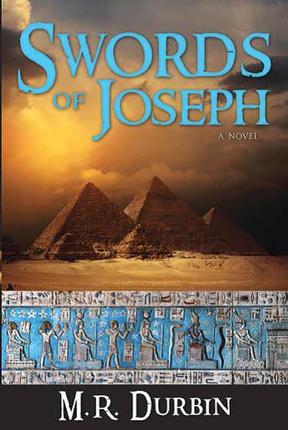 On seeing Swords of Joseph by M.R. Durbin, my initial reaction was “Oh no, not another fictionalized account of a scriptural story.” It turns out this is one of the most memorable books I’ve read. Yes, it is a fictionalized story featuring Joshua of Old Testament fame, but it’s much more than that. It chronicles Joshua’s conversion and commitment to God and explains the reasons and symbolism behind the plagues Moses called down on the Egyptians. It also draws attention to the part descendants of Abraham other than the Israelites played in this era. It delves into the politics, religions, and secret societies of the Egyptian culture and does it through an action packed mystery.

The Joshua of this narrative is not the seasoned leader, committed to the Israelite God and Moses that we usually see in stories and movies about Moses. Instead he’s a brash young man with a smart mouth who doesn’t always think before acting. Faith doesn’t play a large part in his life, but freedom does. He has no intention of spending his life making bricks and being a slave. When Pharaoh decrees that the Hebrew slaves must find their own straw to make the bricks for the grand structures he has ordered them to build as monuments to him, Joshua and his friend Caleb attempt stealing a wagon load of straw from the pharaoh’s own stable.

This sets off his introduction to Moses and his mission to find the bones of Joseph, which according to prophecy are to lead the Israelites on their journey out of bondage. Unfortunately Joseph’s burial place is unknown and rumored to have been destroyed 300 years ago. Searching out a 400 year old grave that may no longer exist and evading those who are determined to prevent its discovery and the emancipation of the Hebrews is not an easy task. By Moses’s instructions they are joined by Gaddi, a descendant or prince of Manasseh and Joshua begins to learn what his responsibilities are in the deliverance of Israel as a descendant and prince of Ephraim.

When the quest to find Joseph’s bones intersects with two young women about to be sacrificed to an Egyptian god, their band of searchers is expanded to five and an angry troop of soldiers vows to kill them. There are chase scenes, uncertainties, a trek across the desert, fleeing along the Nile, deceptions, and betrayals. There are vivid descriptions of ancient temples, a look at the impact of the plagues on the various people living in Egypt including the story’s protagonists, a reminder that Ishmael’s descendants and the Midians are also descendants of Abraham, and a sense that God not only keeps his word, but he prepares those whom he calls for their missions before they even know what those missions are to be.

Joshua is an interesting character and the author does a good job of slowly changing him from an impulsive boy to a man who listens to God. Caleb begins with only slightly more maturity than Joshua and he too grows throughout the story but not as dramatically as Joshua. Gaddi is immature, a little lazy and fearful, looking for acceptance and recognition, and resentful. He matures some, but remains a somewhat naive outsider. The female characters are strong to begin with and don’t change a lot. The villains range from greedy, power hungry priests, to spies looking out for their own interests, to a furious military leader determined to kill the man who bested him in a fight and the woman who nearly strangled him. The military leader, Runihura, and Imad, a desert warrior, are minor characters with strong roles, important to the story and among my favorite characters in this story.

The plot is fast and follows a dramatic action arc. Both historical background and place background are fed into the plot so subtly they never feel intrusive and leave the reader with a great deal to think about. The repercussions experienced by various people as the plagues play out go far to explain the reason for each and how it defeats a particular fallacy of the Egyptian idolatry practiced at that time.

M. R. Durbin spent thirty years as a teacher, coach, and principal. He was born in Fort Ord, California and grew up in Parowan, Utah. He has degrees from both Utah State University and Brigham Young University. He has a deep love for the scriptures and strives to bring a historical context and human focus to them in his writing.

I just purchased and read this book (before I saw the review) and I LOVED IT!