It was a perfect pairing: Agriculture Day, Haiti’s national holiday, a time when Haitians are encouraged to do volunteer work, coupled with planting nearly 25,000 trees donated by The Church of Jesus Christ of Latter-day Saints. More than 1,800 Mormons and their neighbors turned out to plant the much-needed resource.

“It’s interesting that the trees … are not just shade trees and they’re not just trees for soil conversation; they’re fruit trees,” said Elder Wilford W. Andersen of the Church’s Caribbean area presidency. “They’re fruit trees that will be planted on riverbanks and mountainsides and throughout the country. And if you ask the Haitians who will harvest this fruit, they’ll say, whoever is hungry.'”

Volunteers worked more than 11,000 combined hours in near 90-degree temperatures Wednesday digging holes, forming work lines and planting the first batch. Another 75,000 trees are slated for planting by the end of this year, with a total of 400,000 when the project is complete over the next few years.

The project is an ongoing commitment by the Church to help the people of Haiti rebuild a country still recovering from widespread destruction after the 2010 earthquake that killed an estimated 300,000 people. 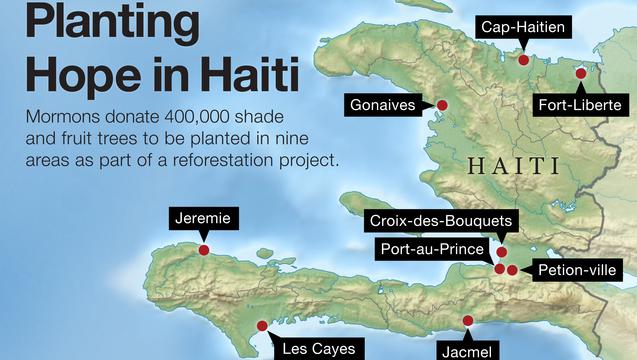 Local Church leaders organized the volunteer effort with Mormons joining friends and neighbors who donned yellow Mormon Helping Hands vests to plant the two-foot-tall trees. “I see a big band of people here today,” said Berthony Theodor, local volunteer project manager for the Church in Port-au-Prince. “They represent the Lord, because they are doing exactly what the Lord would do if He was on the earth.”

Planting took place in six cities in addition to three townships near the capital of Port-au-Prince. The mayor of the Petion-ville Township said it was a “godsend” to have 7,000 trees planted in her community Wednesday, with more than 4,000 to be planted in the coming months. “I [am] happy, very proud,” said Mayor Minerve Yvanka Jolicoeur Brutus. “[I’m] not surprised because it’s a good deed and that is what the Church is all about. We’re very grateful and we hope that this is the beginning of a partnership that we have started.”

Government leaders help choose where the foliage will have the most impact in beautifying the countryside. The trees will spruce up large sports complexes and community parks, populate large swatches of landscape left barren by years of deforestation and edify reconstructed neighborhoods impacted by the earthquake.

Large numbers of families were relocated to camps in sparse desert areas north of Port-au-Prince following the destructive quake. Now, trees will be planted in newly constructed neighborhoods in those areas, where the Church has built more than 150 sturdy family homes over the past three years. 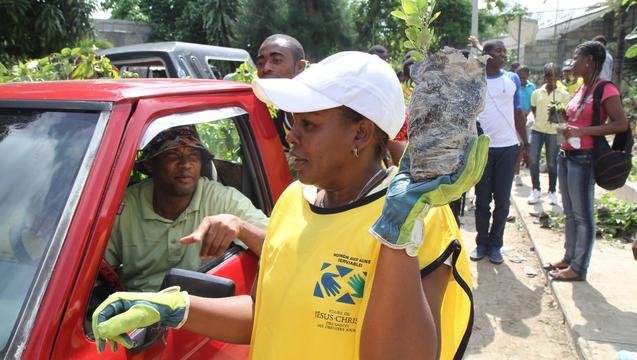 When the project is complete, Latter-day Saint volunteers and their neighbors will have planted around 400,000 trees donated by the Church that will dot Haiti’s countryside, communities and neighborhoods. “This is encouraging,” said Christian Dieugerville of Petion-ville. Gesturing to a ravine with no vegetation, he continued, “It was so dense you couldn’t walk through the woods because of so many trees. Now … when it rains the water washes down and floods the whole street.”

The Church’s reforestation project is an endeavor embraced by Haiti’s Prime Minister, Laurent Lamothe. The Prime Minister has maintained that reforestation is one of the country’s top priorities. Elder Andersen said, “Members of the Church have talked about reforestation as a special project since the earthquake. So the convergence of the two interests has come together now at the right time, and this project has taken shape.” 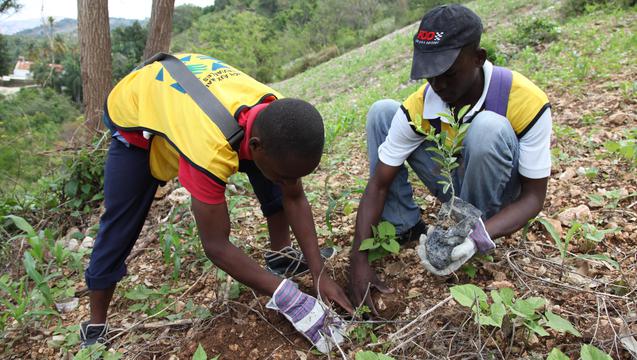 The project also coincides with the Church’s 30th anniversary in Haiti. In 1983, President Thomas S. Monson, then a member of the Quorum of the Twelve Apostles, dedicated Haiti for missionary work. Elder Andersen of the Church’s Caribbean area presidency visited Haiti in February and announced fruit and shade trees would be presented to the people of Haiti in commemoration of this anniversary.

In colonial times, Haiti was called the “Pearl of the Antilles” because of its rich natural resources and prosperous economy. Berthony Theodore has a dream shared by many Haitians. “The vision is to see Haiti return to be the Pearl of the Antilles,” he said.