And the Lord called his people Zion,
because they were of one heart and one mind, and dwelt in righteousness;
and there was no poor among them.
Moses 7:18

A few months ago I heard that Larry*, a fellow ward member and recent convert, had his house tagged by the city. It was deemed a safety hazard. If repairs were not made, the house would be condemned and could be razed.

I asked our excellent Elder’s Quorum President how we could help Larry. He told me that he had referred Larry to a ward member with building experience. My mind wanted to drop the matter there. Larry had been pointed in the direction of possible help. But I couldn’t let it go. I realized that Larry didn’t know the brother to whom he was referred. And Larry finds it hard to ask for help. I didn’t know if the ward member with building experience would be willing or able to offer meaningful assistance. We hadn’t really helped Larry yet; we had just offered a minimal response.

I should tell you a little more about Larry so you can know the man I’m worried about. He is fifty-ish and black living in the South. He works as a security man at an alternative school which means that his life is stressful and he makes little money. He works and lives in a dangerous part of town. His dear wife is earnest but limited by learning disabilities. She will soon have her last straggling teeth pulled so she can get dentures. They have two tween daughters at home who are bashful but capable. And the family is faithful. They always come to church. Their lives are chaotic enough that they are likely to come late but they bring along friends and relatives to be edified by church attendance.

I was not satisfied with leaving Larry to fumble his way through the ward trying to find the help he needed. So, with Larry’s permission, I called a contractor friend, who is also a good latter-day saint, and asked if he would meet me at Larry’s house. 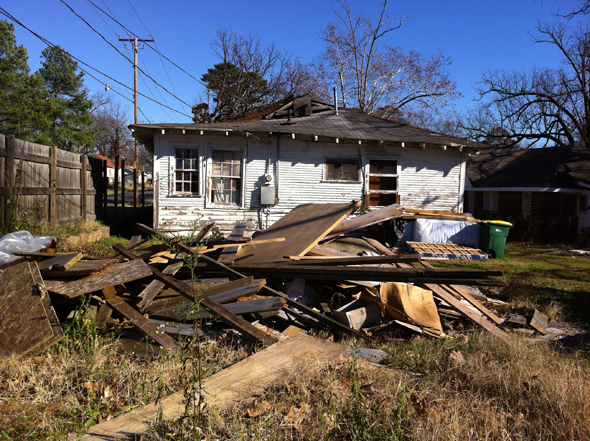 On a chilly but sunny Saturday morning we met at Larry’s house. This able and generous contractor looked at the house and groaned. Both of us felt the irony. In the contractor’s ward there are unnumbered members who live in million-dollar houses-palatial by comparison. But Larry and his family lived in a rundown shack that the city has condemned. The next day in his priesthood meeting, the contractor would bring up Larry’s plight; no one even asked a follow-up question. No one offered to help. We all expect the system to take care of him. We have absolved ourselves of personal responsibility.

The contractor and I set up a ladder inside the house so he could look through the long-absent ceiling at the underside of the roof structure. A section had been added to the back of the original frame house. It had not been built correctly. The roof was caving in, pushing out the walls, tearing the roof open, and pulling down the house.

While the contractor examined the structure, I studied the rest of the house. There was no flooring in the kitchen-only fragments of old linoleum and lots of worn subfloor showing through. There was no insulation in the walls or attic. Worse yet, there was no sheetrock or plaster on walls or ceiling since the failed roof had allowed rainwater to soak and ruin what once formed the interior shell of the house. Larry’s gas heat was not working since the city had detected a leak in the line and shut off his gas. He had no money to hire a plumber to fix the leak. So his family found refuge and warmth at a relative’s house. Larry remained in the home every night to keep crack addicts from invading and robbing him. He huddled in the kitchen using the electric stove top for heat. The high electric bills created by this makeshift solution kept Larry financially strapped and trapped.

The contractor finished his examination. His verdict: In Zion this house would be razed and replaced with a modest, tidy, and solid structure. But we’re not in Zion. We’re not even in the suburbs of Zion. This house needs major work just to be habitable.

We scratched our heads. How do we proceed? We thought of a one-time Mormon who had experience in framing and needed work. I phoned and left a message for him to call me. I didn’t hear from him. I called his wife and left a message. No response. Finally I went to their home. I asked if he would look at Larry’s house and see if he could make enough repairs to keep it from collapsing and keep the city from putting notices on it. I promised to pay him.

It took many calls to get the framer and Larry together. I started to wonder if nature was conspiring against us. But, through repeated efforts, the framer not only assessed the problem but worked with a friend to repair the roof structure, pull the walls partly back, and re-roof the failed portion. Of course it cost more than expected. But I didn’t mind paying for it. We had a little money in savings. 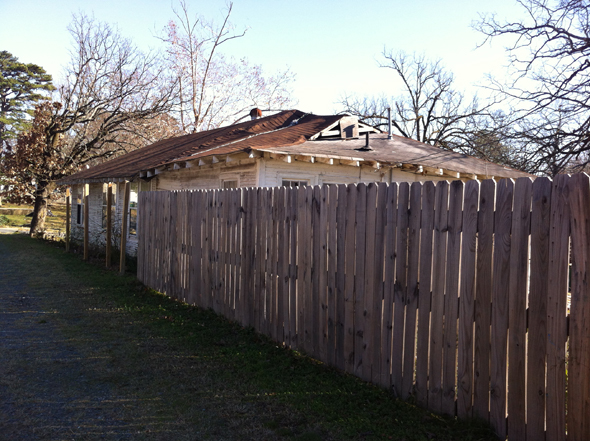 The home that I share with my wife is modest but it is tidy and serviceable. It’s also paid for. It seemed to me that Larry needed at least some safety in his own home. Can I feel good about having savings when Larry doesn’t have a house that’s safe?

A friend of modest means heard of our project and sent me $500. I am grateful for his generosity. Some people are always poised to help. They seem like saints to me.

We are still trying to track down the gas leaks. We wonder how to fix the floors; before we cover them we need to be sure the structure is solid. We can get the brethren in to insulate and put up sheetrock. We can clean and paint. There is much to do to get the house to a minimum standard.

For now Larry’s daughters camp in the living room with their clothes hung from pipes. Larry and his wife use a portion of the only serviceable bedroom. The many broken windows are at least covered with plastic and packing tape.

In the Church we talk regularly of Zion. We yearn for the promised time of peace and community. We tend to assume that Zion will be delivered by Jesus’ return. But I wonder if He is waiting for us to create Zion conditions to welcome Him.

Some would say that we are already at the outskirts of Zion. We pay fast offerings and assorted humanitarian contributions. We genuinely care. But I think that Zion requires more. More commitment. More willingness to notice the needs. More willingness to sacrifice. More patience in steady service. I fear that Zion is still far away.

None of this is to fault our ward. We have a wonderful bishop and the most active, service-oriented cadre of saints I know.

Our ward members are amazing. They provide hundreds of rides to people without cars. They look after the sick, impaired, and discouraged. They take the lonely out to lunch. They tow and fix broken-down cars. They put new roofs on houses. They help a sick man get a new driveway. They offer affordable housing to struggling families. Our ward members provide a steady stream of loving service.

But we still have people with unending medical problems, burdens of the soul, persistent limitations, and limited resources.

How will we get to Zion? How will we attain one heart and one mind? How will we draw heavenly power into our families and faith communities?

I think that God is asking for more from us. The trek from the comfort of our prosperous lives to the City of Zion requires us to cross the plains of commitment and sacrifice.

And others will he pacify, and lull them away into carnal security, that they will say: All is well in Zion; yea, Zion prospereth, all is well-and thus the devil cheateth their souls, and leadeth them away carefully down to hell. (2 Nephi 28:21)

I have learned that it’s a messy business getting closer to Zion. The journey requires us to notice the needs and take personal responsibility. Finding the right way to help is often difficult. We must coordinate with our leaders. We must draw others into helping. We must honor people’s agency and responsibility. It requires the wisdom of Solomon, the compassion of Christ, and the inspiration of heaven.

Will our journey to Zion have to wait until we are willing to sacrifice our time, talents, and everything we have for each other? I think so. We can’t imagine we have arrived in our personal Zions while so many of our brothers and sisters have poor housing, broken cars, toothless mouths, and aching hearts.

We should not be content to remain in a relaxed state of comfort as long as so many of our brothers and sisters suffer. God asks each of us: What are you willing to do today to build up the kingdom of God and establish Zion? Every one of us is surrounded by needs. God invites us to pick up a hammer and head toward Zion.

Every man seeking the interest of his neighbor, and doing all things with an eye single to the glory of God. (D&C 82:19)

* Name changed to protect the privacy of the family

Spot on. "We are not waiting for Zion, Zion is waiting for us." (Pres. Kimball) Selfless service and inspired giving pave the road to Zion. M.Russell Ballard's talk Oct. 2012 conference is a revelatory key to the bringing about of Zion.

The comments are as touching as the story. For almost twenty years I lived with people like Larry and family - some would touch your heart with their independence and take only the most minimally offered help while plenty of others who decided that they should be first in line for free professional help from ward members whose service time was stretched to the limit and those people felt no qualms receiving the services without any offer to pay. It was such a conundrum. The fine line between need and greed is so difficult to make out and YES the bishop is the one to judge and hopefully he is on top of things temporally in the ward bounderies. I think that is the beginning of Zion. (My husband was bishop for several years and so many of these situations were addressed.) A side note: My husband mentioned this last year picking up donated scouting food bags that one of his young scouts made the comment that the more humble homes contributed way more food than the large homes. Perhaps they relate to what it feels to be in need; Sad. What we do with the poor and needy especially in the area of fast offerings is to our betterment or our condemnation. Perhaps it's time to review what the Prophets have said concerning this matter.