The Mormon Church Grows in Africa 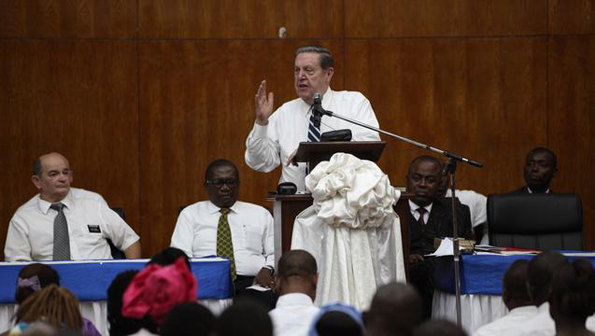 Every year, as congregations of The Church of Jesus Christ of Latter-day Saints grow in different areas, several dozen new stakes are organized around the world.

As we reported, Elder Jeffrey R. Holland organized the 3,000th worldwide stake of the Church in Freetown, Sierra Leone, in December 2012. The stake is the first in the West African nation and consists of eight congregations (around 3,000 members).

“So much is happening that there seems to be this momentum, and it really seems to be featuring now the African moment, in a sense,” Elder Holland says.

The past decade has been one of rebuilding in Sierra Leone, following the end of the country’s civil war. Elder Holland says the Church has been a great source of peace for members there; many endured extreme hardships during the war.

Abibu Charles is part of the new stake’s leadership and said the past year has brought incredible blessings for his country. “Ten years back, I never thought this would have happened,” he said. “The Church is growing rapidly. Things are happening.”

Elder Holland said the people of Sierra Leone have a strong desire to serve others and a wonderful perspective on life.

“If ever you wanted an object lesson that your happiness doesn’t depend on your material wealth, you’d go to Africa,” he said. “These are happy, blessed, joyful people, and in many cases they have almost nothing.”

My Wife (colleen and I along with the Fishers started the church in Sierra Lione in 1978. I got worked with the Pres. and got approval for the Church to begin. After getting approval, Elder Scott and wife came and stayed with us for a week and dedicated the land. A great experience.

My wife and I visited Sierra Leone in 2010 as Short Term Specialists for Humanitarian Clean Water Projects. It did not take long for us to love the African people. They are a happy, blessed, joyful people. We pray for their continued growth in the gospel as their testimonies continue to grow.