BYU Performance of Phantom of the Opera to Feature Familiar Christines 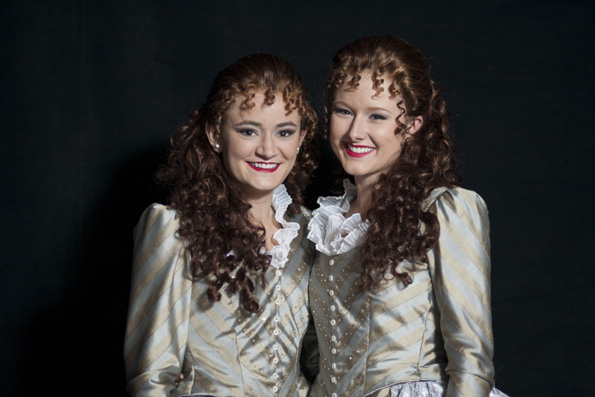 Lifelong friends Whitley Davis (left) and DeLaney Westfall share the role of Christine in BYU’s production of Andrew Lloyd Webber’s The Phantom of the Opera.

They’ve known each other since they were six. They were in Annie together when they were eight. They enrolled BYU together, shared an apartment together, took classes together, and now they’re Christine together.

DeLaney Westfall and Whitley Davis will both perform the role of Christine in different performances during BYU’s production of Andrew Lloyd Webber’s The Phantom of the Opera, which opens this week.

Technically, DeLaney has the role and Whitley is the understudy, but Phantom director Tim Threlfall wanted to make sure Whitley got a few opportunities of her own. She’ll be Christine in three of the performances.

“When I heard that BYU was going to do Phantom I was excited, but I never thought that I would be cast as Christine,” DeLaney said.

“We’re normally not up for the same roles,” Whitley added. “You’d think it might get competitive, and we might be sort of ornery toward each other, but it wasn’t like that at all. It’s been great to learn from her, feed off her and listen to her ideas.”

These two once-little girls from St. George are as close as ever. Whitley was recently married. DeLaney was a bridesmaid. They have two classes together this semester, and DeLaney said she “kind of hates” every class they don’t have together.

Both have been around musical theater quite a bit, but say they’ve never been involved in something as huge as Phantom. The university and local community has been buzzing with excitement for what is one of the first university productions of the show. Tickets sold out Jan. 10. However, a limited number of student rush tickets will be available for $10 each prior to each performance. The performances run Jan. 16 through Feb. 2.

The production has seen a massive collaboration from within the College of Fine Arts and Communications. The Interdisciplinary Music Dance Theatre Program and Department of Theater and Media Arts combine to present the musical. The BYU Symphony Orchestra performs the score. Other theatre and media arts classes are assigned to work on hair, makeup and performing the duties of the stage/running crew.

Threlfall has tried to put a unique twist on the fabled musical that recently celebrated its 25thanniversary on Broadway.

“It’ll be fun to see what people think,” Whitley said. “A lot of people come in with an idea of what it should be, but hopefully they’ll like this just as much or better.”

Preparations for the production have been intense. DeLaney and Whitley routinely log marathon days, with five- or six-hour rehearsals. A little joke or laugh can go a long way for the two, who say they share the same unique sense of humor.

“We’re just so weird and quirky that we help each other survive,” DeLaney said.

Despite differing looks, the two of them are often mistaken for each other.

“We have the same mind,” Whitley said. “We were just in class together and said the same exact thing to each other about five different times. That’s pretty typical.”

For these two childhood friends, being able to share this experience and share this role has been a dream come true. Whitley remembers running around her home as a child, pretending to be Christine, singing her songs, trying to hit those notes. Over the years she’d forgotten that childhood passion she had for the musical, but it’s all coming back now. She said there’s just something special about the feeling ofPhantom.

“It’s so magical,” Whitley said. “It’s such a magical show.”