Are you looking for just the right amount of “scare” in a fiction book or perhaps a fun Halloween picture book for your youngster? Here is a combination of both types, beginning with books geared for readers ages nine and older, with the exception of the last fiction book. The picture books can be enjoyed by all ages. 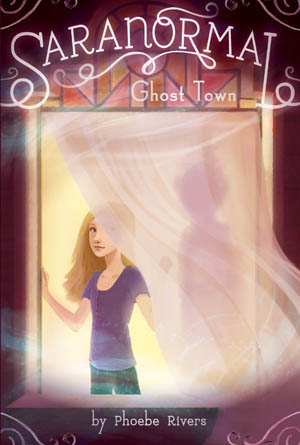 Saranormal: Ghost Town, by Phoebe Rivers, is the first book in this new series about a girl who has the ability to see and talk to ghosts. She has just moved to a coastal town in New Jersey and hopes that this secret goes away. But what actually happens is that many ghosts seem to be everywhere in town, especially one who desperately needs her help. There are three more in this exciting series: “Haunted Memories”, “Mischief Night” and “Spirits of the Season”.

Theodosia and the Last Pharaoh, by R. L. LaFevers, and illustrated with wonderful drawings sprinkled throughout by Yoko Tanaka, is actually book four in a fabulous series. Since I’ve not read the other three books, I was glad that the first chapter began with a summary of plot and characters to help those new to the series and introduce the important elements of the story. Eleven-year-old Theodosia heads to Egypt with her cat as she is planning on meeting up with her archeological mother, as well as return the Emerald Tablet so that the evil Serpents of Chaos doesn’t intervene. The story is exciting, intelligent and well written. I will definitely read the other books in this series! 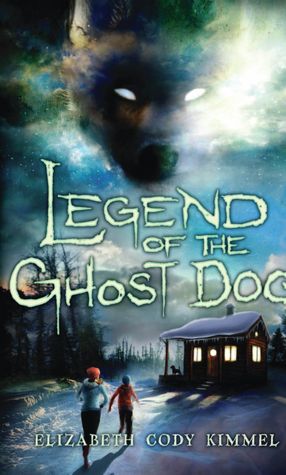 Legend of the Ghost Dog, by Elizabeth Cody Kimmel, is part ghost story and part mystery. Twelve-year-old Tee and her little brother have come for a two week vacation to the outer region of Nome, Alaska while their dad works on his book. But while Tee is out for a walk with her beagle, she sees a shadow in the bushes. What she discovers about the shadow will keep you reading to the very end.

The Secret History of Hobgoblins, by Professor Air Berk, and richly illustrated by Alan Lee, Larry MacDougall, Garyt Chalk Virginia lee Fernanao Molinari and Douglas Carrell, is actually written in an informational format with flaps to open, letters to read and pages that extend. This is a delightfully inventive book that will surely draw the reader into the mysteries and magic that lie behind every single hobgoblin that ever lived! The illustrations are richly drawn and labeled with some colorfully displayed. This book invites creativity and imagination! 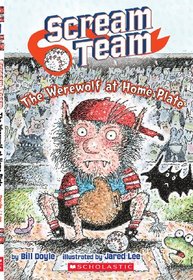 Scream Team: The Werewolf at Home Plate, by Bill Doyle, and illustrations depicting great humor by Jared Lee, is a new series of mismatched monsters that draws on sports to make a fun and humorous storyline. There are two more stories, each centered on a different sport: “The Vampire at Half Court” and “The Bigfoot in the End Zone”. This series is perfect for ages seven through nine.

The rest of the books are picture books. Spike the Mixed-Up Monster, by Susan Hood and painted with hues of yellow, green and blue by Melissa Sweet, is about learning that being nice wins friends. Spike is an endangered salamander who lives in Mexico and is searching for a friend by scaring other animals. There are many elements to learn in this book besides good behavior. There is Spanish found throughout, along with a list of Spanish words defined. Also, there is more information about endangered animals found in that part of the world. 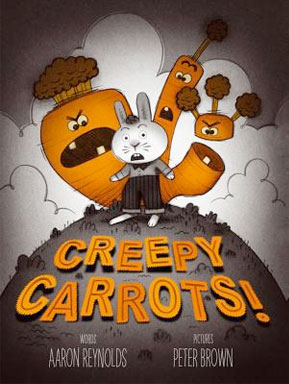 Creepy Carrots!, by Aaron Reynolds, and drawn and magnificently colored with the embodiment of foreboding by Peter Brown, finds Jesper Rabbit eating carrots in Crackenhopper field at will whenever he desires. But then one day, he finds the carrots are following him. Could this be because he feels guilty of doing wrong? The book is drawn with black and gray pallet that surrounds each page conveying an audacious thriller.

Monsters Aren’t Real, by Kerstin Schoene, is a clever smallish size picture book that shows part of a monster’s face on the cover. The monster is dealing with many statements declaring that he’s not real. So he sets out to scare anyone he can find, but no one seems to notice him. He finally finds another monster which gives him a friend and that makes his day and life much happier.

Ready for Pumpkins, by Kate Duke, is the perfect book to celebrate the growing season. Hercules, the classroom guinea pig, watches the first graders planting seeds in the spring. When he’s taken to the teacher’s dad’s farm for the summer, he gets the chance to grow pumpkin seeds. This book showcases the process, patience and hard work to grow plants from seeds. The watercolor and pen used to draw the pictures blend story to picture perfectly.