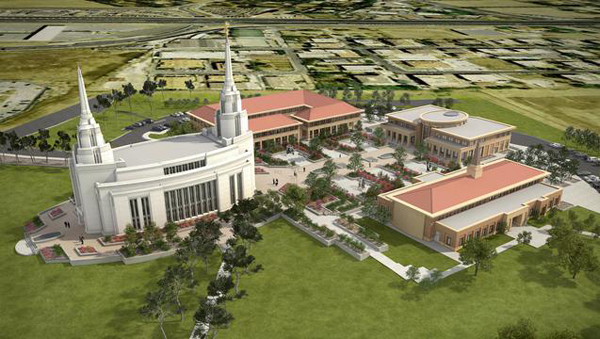 More than 150 years since the first members of the Church were baptized in Italy, and after decades of negotiations, the Italian government has granted The Church of Jesus Christ of Latter-day Saints official status as a church and “partner of the state.” This legal status gives the Church greater freedom to do more good, both as a church and as a social institution.

Maurizio Ventura, president of the Pisa branch, explained, “The intesa is a fulfillment of a long-awaited blessing.”

Italy President Giorgio Napolitano signed the Intesa con lo Stato, or legal agreement, on 30 July 2012, and the document will soon be published as law in the Gazzetta Ufficiale, the official journal of record of the Italian government. In contrast to the 1993 legislation that recognized the Church as only a charitable institution, the Church is now officially recognized as a religious denomination. The LDS Church joins only a handful of other churches with intesa status (including Catholics, Jews, Baptists, and Methodists).

John Zackrison, director of the International Coordinating Committee for the Church, explained: “It will eliminate current barriers that frequently interfere with our Church leaders performing marriages and otherwise ministering, it will smooth the process for obtaining visas for missionaries and mission presidents, and it will grant unquestioned freedom for the Church to perform any functions or activities deemed essential to its worldwide mission,” as well as grant Latter-day Saint clergy the ability to visit members and those in need with automatic access to state hospitals, prisons and military barracks.

Additionally, the Church’s new status and strengthened relationships with government officials will enable the Church to work more effectively in community relief efforts with the Catholic Church and other recognized religious denominations.

“The secretary of the prime minister has already put me in touch with the minister of social activities,” said Giuseppe Pasta, the Church’s former national director of public affairs in Italy and current volunteer coordinator with government and religious institutions. “Important Italian entities are already reaching out to us from the left and from the right now that we are considered an official religious denomination.”

Church members are “very, very happy – we have been waiting for this for many years. We have been praying and fasting, striving to be better people, to receive the Lord’s help – and now we are here,” said Pasta.

A Temple in Rome Italy 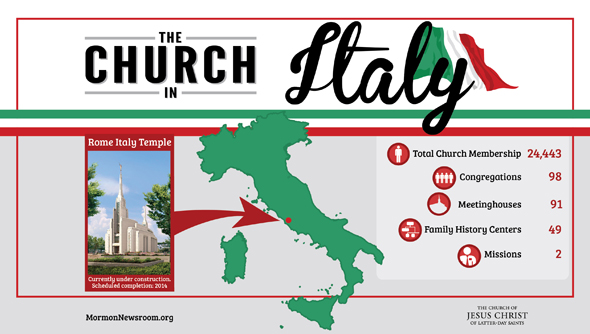 President Thomas S. Monson surprised members of the Church when he announced that a temple would be built in Rome, Italy during the October 2008 general conference. President Monson participated in the traditional groundbreaking ceremony for the Rome Italy Temple 23 October 2010.

The Church is building the temple on a beautiful 15-acre site in the community of Settebagni, Rome. When completed, it will serve over 23,000 Church members living in Italy and in neighboring countries.

Currently the Church operates 138 temples worldwide. The Rome Italy Temple will be the twelfth in Europe and the first in Italy.

The Church in Italy

First among missionaries to Italy in 1850 was Elder Lorenzo Snow, a member of the Quorum of the Twelve Apostles. He and three other missionaries preached to the French Protestants in Piedmont Valley. Several Church publications were translated into French. By 1855, 50 members had emigrated to America and membership was 64.

However, Church growth did not come easily. Progress was interrupted by the anti-Church activity outside of the Valley and the heavy legal requirements. Finally, after years of unsuccessful attempts, in 1964 the Church was allowed to resume missionary efforts.

The first congregation of Latter-day Saints in Italy was organized on March 20, 1966, in Brescia. A few months later, the first Italian mission was opened in Florence on August 2, 1966. After that time missionaries were sent to many other cities across the country and membership grew rapidly. In 1967, there were 66 members divided into two Italian congregations and seven congregations with both Italians and United States military servicemen. In 1985, membership was 12,000, and in 1990, it was 14,000.

In 1993, Italy gave formal legal status to the Church. That December, 50 Church missionaries were invited to sing on Vatican Radio from St. Peter’s Basilica at the Vatican.

There are 18,000 members of the Church in Italy today, with 121 congregations.