The Children Are Tender: Lead On Softly | Meridian Magazine

The Children Are Tender: Lead On Softly 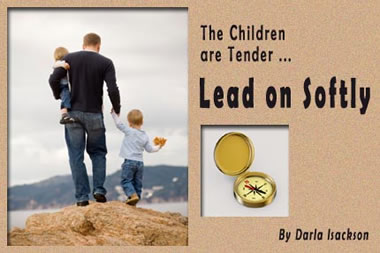 When I think of fathers, I think of leadership. I found a gem for fathers in Genesis the other day. Look at these two verses:

And he said unto him, My lord knoweth that the children [are] tender, and the flocks and herds with young [are] with me: and if men should overdrive them one day, all the flock will die.

Let my lord, I pray thee, pass over before his servant: and I will lead on softly, according as the cattle that goeth before me and the children be able to endure, until I come unto my lord unto Seir (Genesis 33:13-14).

Oh, what challenges we have as parents to “lead on softly” – not with harshness or unreasonable demands or unrighteous dominion, but softly.

I watch with sadness as a father I know demands that his children instantly jump when he says jump. I see the hurt in the children’s eyes, the confusion. Each child of God is born with a natural fervent love of agency and an inborn determination to make his or her own choices. I think we all have the inner knowing that agency is a gift from God, that it is right.

I suspect that this church-going father thinks he is being a “good disciplinarian,” yet the goal of discipline is not make our children into little robots. His harsh anger when they have any inclination to delay or negotiate is building walls between the father and his children – to say nothing of creating a bad feeling in the home. Surely there are better ways to discipline.

Taking the Drudgery Out of Discipline

One a warm summer afternoon, I left my children with a babysitter and went shopping. I soon noticed I had forgotten my shopping list and returned, coming in the back door to avoid repeating the farewell scene. I got my list and was about to leave when I heard angry voices.

I heard a slap and loud crying. It hurt me that someone had treated one of my children unkindly, and suddenly I identified with Heavenly Father standing on the other side, listening. I sense how He must feel when any of his children are treated badly. In one of those rare moments of insight, I wept as I sensed how He had felt when I had been less than kind in my role as a parent.

This brought a new thought: my Heavenly Father is a parent, too. How does He treat me? I realized then that guidance and help to be a good parent comes not only through inspiration, but also though Heavenly Father’s example as a parent! I felt I had found the best source I could think of for how-to’s of discipline and child-rearing in general – the example of our Heavenly Parent.

Discipline is, at best, a controversial subject. But if we try to discover the basic principles the Lord uses with us as His children, we will have some sure guidelines to follow.

The dictionary defines discipline as “training which corrects, molds, strengthens, or perfects.” That definition seems in keeping with what the Lord is trying to do for us, so we will accept it as our general frame of reference. Discipline is training that helps a child develop his own inner controls, which in turn make real obedience possible.

Basically, discipline should always teach with respect and point a child to a better way. Effective discipline is not just a regime of outer controls. As appropriate for each age, it turns responsibility over to the child rather then depriving him of it, and builds his feeling of worth.

Love Affirms the Right to Be

I remember a phrase from one of Deanna Edwards’ songs that always spoke to my heart:

“Love Affirms the Right to Be.”

What does that really mean? I think it means that when we really love people we value who they are; they we treasure the individuality, unique gifts and potential of each child.

I believe that fathers, if they want to be like the Good Shepherd and His Father, will safeguard agency and safeguard identity.

The Golden Thread of Respect

Respect seems to be the basic and essential quality of the Lord’s dealings with man – the golden thread running through the parental example that our Heavenly Father sets for us. The dictionary defines respect as “to consider worthy of esteem, hence to refrain from obtruding upon.” Lack of respect seem to be at the root of most relationship problems. Parents sometimes live by a separate set of rules with children and show them less respect than anybody else. For example, who would ever say to anyone but his child, “You look like a slob; go change your shirt.” How ironic that we so often talk disrespectfully to the very people we love most on the earth.

Perhaps we need to remember more often that in the spirit world our children might have been more valiant than we were, and that just because we came to earth before they did doesn’t make us superior to them. Perhaps we need to remind ourselves what amazing spirits we are really dealing with.

We need to find ways to teach and discipline which don’t keep parents and children at swords point with each other. A good place to start is by admitting that we are not perfect. I talked with a wise father once (my stake president at the time) who said the thing he always tried to impress on his children is the need to learn from mistakes, and he tried to set the example by admitting what he was learning from his own.

He said that when his children made mistakes he asked them, “What did you learn from making that choice?” If he was satisfied with the reply, he would say, “If you learned your lesson, then it shouldn’t happen again.” It rarely did, and they were able to solve the problem quickly and feel good toward each other immediately afterwards.

Children are meant to be loved and enjoyed. They can be lots of fun; but when we see discipline as drudgery, when we nag or yell or fight, we deprive ourselves of much of the pleasure of being parents. Certainly we need discipline in the home because there are many things children need to learn. But the basic rule of happy parents seems to be respect for the rights and feelings of each family member. Respect sustains relationships.

Watch for my next article for some practical examples of how to follow the Lord’s example of respect in our relationships with our children.

The Lord’s Guidelines for Use of Power

We have great power over our children because of their size and their dependency on us, and we need the Lord’s help to know how to use that power in a way that will build them and build relationships. A guide for priesthood power is found in D&C 121:41-42. Shouldn’t the same principles apply to parental power?

No power or influence can or ought to be maintained by virtue of the priesthood, only by persuasion, by long-suffering, by gentleness and meekness, and by love unfeigned; By kindness, and pure knowledge, which shall greatly enlarge the soul without hypocrisy, and without guile.

Not only does this scripture give us accurate guidelines for the use of parental power, but it is also a beautiful summary of the qualities of a parent who is following the Lord’s example.

Any time we desire to see the true pattern, we can look to Jesus and to God the Father. In regard to agency, their example is stellar. They honor agency so much that all through the history of time they have allowed “man’s inhumanity to man” rather than infringe on the choices their children make. They command, state in clear terms what they desire us to do – then step back and allow each person his agency in regard to obedience.

That’s not to say that parents shouldn’t enforce consequences for disobedience – God certainly does. But so many times the consequence is the natural law withholding of blessings not earned. So much we can learn from the Lord’s example. The Lord always shows deep and profound respect for his children by honoring their agency, not “obtruding upon,” not “over-driving,” forcing, or demeaning.

Our Children Are Tender: Let Them Know They Are Loved

Heavenly Father introduced His son by saying, “This is my beloved son, in whom I am well pleased. Hear ye him.” I suspect it should also be our goal, whenever we can, to encourage others to honor and respect our children and listen to them.

What little boy doesn’t yearn to hear words of encouragement from his father? If he hears them, he is so much more likely to grow up to be a young man his father can truly be pleased with. In every way we need to consider that “our children are tender,” and that we should “lead on softly” so our children will be able to endure.