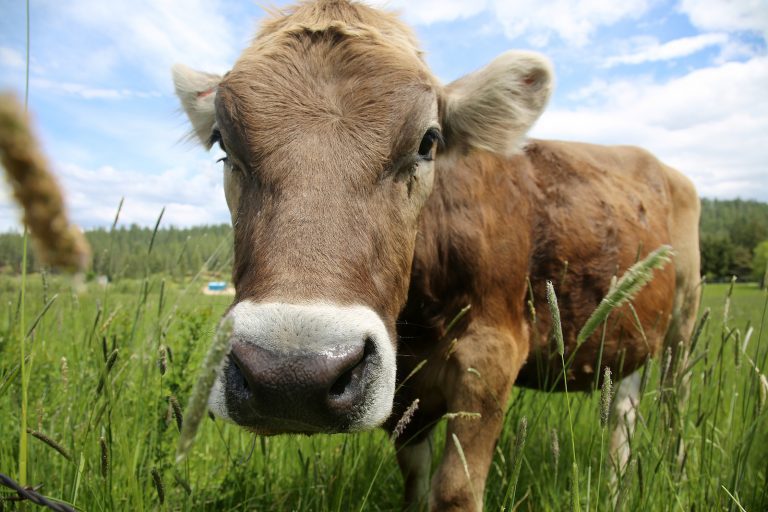 A friend of ours came to visit. She had two little girls. Susan was five, and Tiffany was three. I enjoyed these two children. They were both cute and smart. But the things I enjoyed the most were that Susan talked like an adult, and she was a voracious reader. Though she was only five, she had probably read every children’s book we had at our house during her visits. It was fun because she didn’t always understand everything she read, and her interpretation sometimes made more sense than the way we adults think and talk.

While their mother visited with my wife, Donna, the two little girls came out to swing on our swing set. I was working on a shed roof nearby, so Donna asked me if I could keep an eye on them. That was easy from my vantage point, so I agreed.

Susan was kind to her little sister and pushed her endlessly on a swing. But then they heard something, and they stopped to find out what it was.

Our cow, Leah, had seen the two girls. Always one to want to make friends and desiring to get her ears scratched, Leah had come to the fence and was calling to the girls.

Susan led Tiffany by the hand over to the fence. Leah put her head over, begging for attention.

“This is a girl cow,” Susan said, with a great air of authority.

“How d’you know?” Tiffany asked in her cute child voice.

Susan turned to me to verify she was right. “Mr. Howard, this is a girl cow, isn’t it?”

Susan then turned back to her little sister. “I knew it was a girl cow because she has big eyelashes.”

I had to smile at that. Naming the cow Leah was my wife’s idea. Leah had big brown eyes and big eyelashes, and the Bible talks about Leah, the wife of Jacob, as having tender eyes.

Leah could not get the girls to scratch her ears, so she mooed at them. It was loud for the two little girls standing next to her. The sound scared Tiffany, and she backed away.

“You don’t have to be scared,” Susan said. “Cows have horns, and the sound they make comes from them opening their mouths and blowing their horns.”

Susan led Tiffany back up to Leah and pointed at Leah’s back end. “Do you see that big ball thing hanging on the cow’s belly? That is called an ‘under’ because it hangs under the cow. And do you see those four pointing things hanging down from the under?”

Tiffany shook her head, hanging on to everything her big sister said.

“They are called treats,” Susan continued, “because cows make cow pies, and then they give milk to go with pies. So, the cow pies and milk are treats.”

Susan looked up at me. “Do you like cow pies, Mr. Howard?”

“I can’t say as I have ever tasted one, so I wouldn’t know,” I replied. “However, I will admit that I stuffed my cousin’s face in one once when he tricked me into touching an electric fence. He didn’t seem to enjoy the cow pie, so I’ve never had a hankering to try one.”

“Do you think Tiffany and I could taste one?” Susan asked.

“I’m afraid we’re all out of warm cow pies right now,” I replied. “But we do have some fresh milk that came from this cow’s treats just this morning. Donna also made some chocolate chip cookies today. What do you say we go into the house and have some milk and cookies?”

The girls nodded, so I came down the ladder. The three of us scratched Leah’s ears, then headed in for the cookies and milk. And indeed, it was a treat. But I knew I would never think of that word the same way again.

Delightful story! Thanks for sharing.

This is precious and hilarious at the same time. I will remember these whenever I see a cow. Thank you!