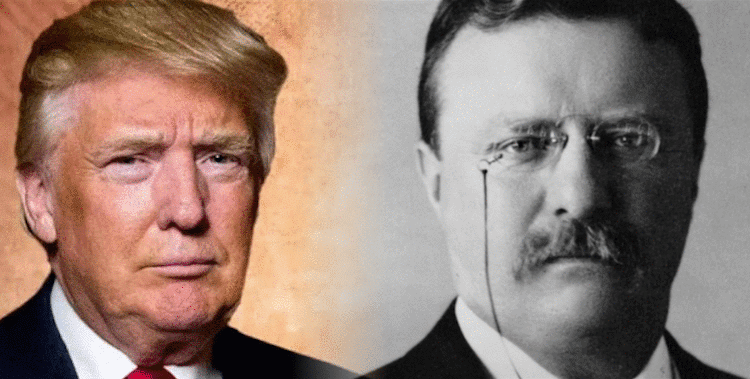 What Teddy Roosevelt Can Teach us about a Trump Presidency

Once Trumpians finish rejoicing, Hillaryites walk away from the ledge, and McMullin’s wake up to reality, we all will wonder what kind of president will Trump be. Soothsaying without a history book is vain, so, in examining past presidents one president stands out as awfully similar to Donald Trump and predicting what he’ll do as president can reasonably be achieved by examining the difference and similarities.

Here are 21 similarities that provide a possible glimpse into a Trump administration​:

Similarities do NOT mean we’ll see a statue of The Donald on Mt. Rushmore unless he builds it. But it does make one wonder about the intelligence and educational breadth of Trump’s critics who say he’s a warmonger and a potential disaster. He may be, but they said the same thing about Teddy Roosevelt and Ronald Reagan. Of course they’ve had the great advantage of historical perspective on their actual presidential record.

Mr. Bombastic now has a chance to prove his chops. Stay tuned and involved.

The author forgot this comparison of both who proposed doing the impossible: TR got the Panama canal built... a herculean feat and much more costly and unrealistic than DT's border wall that some say can't be done.

While I agree that both TR and Trump are/were brash and outspoken, and both from NY, their backgrounds have little else in common. TR's "love" of war was a direct offshoot of his belief that his father's decline was due to the fact that he avoided military service in the Civil War. TR had quite a bit of experience in government long before he became President- City, State and Federal, and he was not elected- he first became president because of McKinley's assassination. He was reelected, but when he ran again later on a third party platform, he was defeated. Even if you like how TR ran the country, it was over 100 ears ago and the world scene is very different today, not to mention the media coverage, social media, and speed with which everything is done in our modern world.