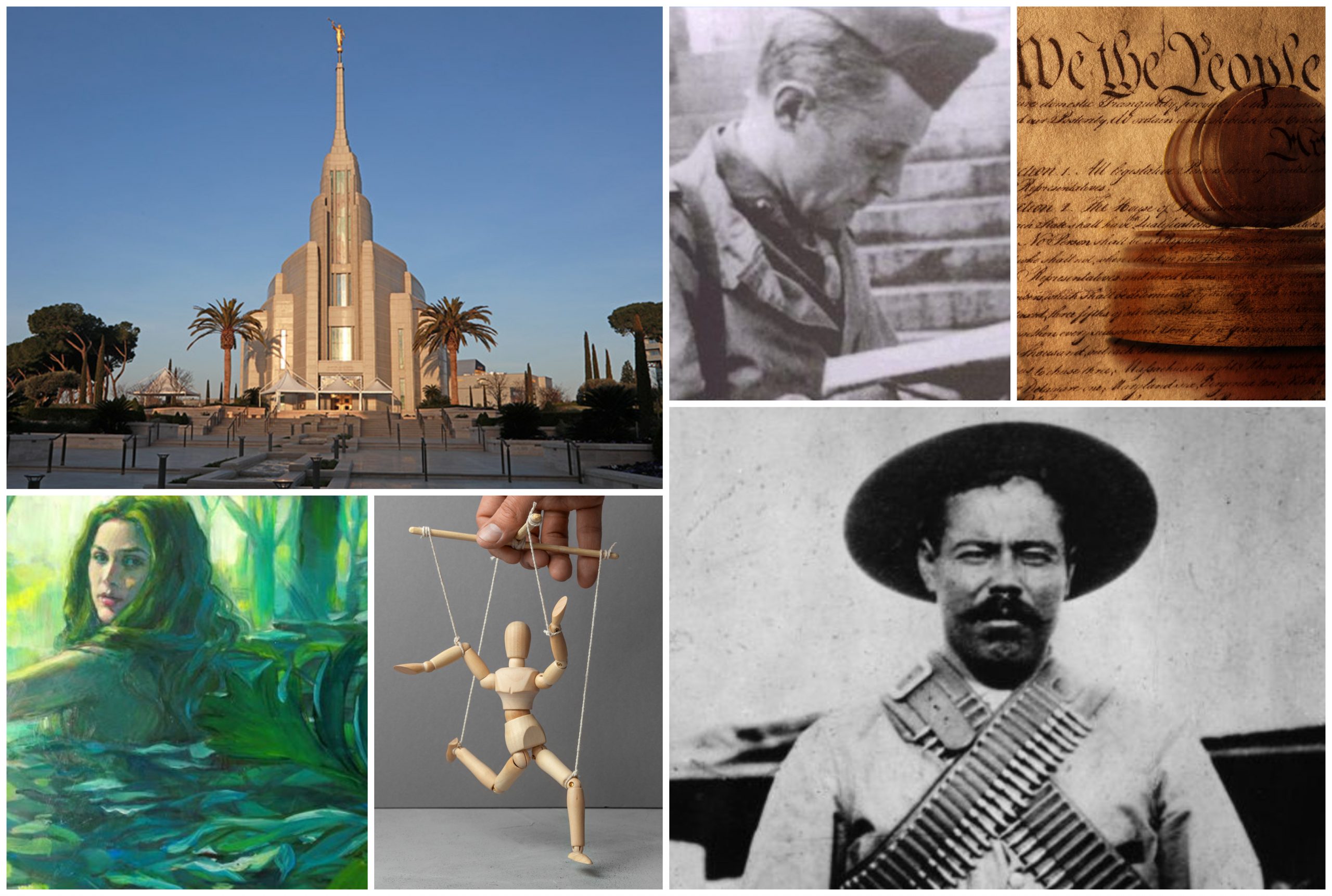 This has been a year of rapid-fire, breathtaking changes in The Church of Jesus Christ of Latter-day Saints. We’re saying goodbye to Boy Scouts, Laurels, Mia Maids and Beehives, the word auxiliary; saying hello to women being witnesses for ordinances, a new Young Women theme, and entirely new youth program, changes in the temple ceremony and so much more. We’ve seen multiple temples dedicated across the world, including in Rome, where the First Presidency and Quorum of the Twelve all attended. We watch and try to absorb these changes like riding on a bullet train, and know that we have not yet begun to understand what “hastening the work” means.

At Meridian, it is also a time for us to compile our best-read stories for the year, based on your readership. These stories are simply the stories you read the most, starting from number 13 and working our way up to the number one best-read story of the year. What we haven’t included in this list is all of the Come Follow Me lesson helps and our podcast, which tops this list. We’re pleased to say that Meridian readers take seriously the charge to study the scriptures and follow the new curriculum.

Our top stories reflect a variety of topics, but share one thing in common –you loved them.

13. Government Study Confirms What Prophets Have Been Telling Us All Along

There is a change in the wind. Yes, at workplaces, on the web, and in the media, people are talking about food storage. People from all walks of life, all economic strata and all parts of the country are now heard saying they “just have a feeling” they should be preparing – and first and foremost that they should be storing food.

12. “The Constitution Hangs by a Brittle Thread”: Joseph Smith’s Prophecy and Our Responsibility

My friends and associates will tell you I am an optimist but not an alarmist. In that spirit, I have written this first part of a two part series regarding the Constitution hanging by a brittle thread or hair, not to alarm but hopefully to awaken the very people to whom this prophecy was addressed to the precarious state of the constitutional rule of law in America and to do so in a non-partisan way.  At present, to put it kindly, I think Americans of all stripes, sects and parties often give a measure of lip-service to the Constitution; but, as recent surveys note, they know little of its content and less of why it is so important.

11. What the Public Thought of the Rome Temple

The building of a temple and the open house that follows brings a surge of good will, not only from the members, but from the public who gets a glimpse inside a temple that they won’t see again. Surprisingly the neighborhood starts to think of it as “our” temple. They become curious as they see it rise. They want to see inside.

10. Simple Counsel From a Stake President that Changed My Life Forever

I clearly remember that day back in the summer of 1968. My husband and I were sitting in Sacrament Meeting in our student ward at BYU when we received counsel that has profoundly affected my life. Our Stake President was speaking, and what he taught us is one of the few life lessons I still remember from our four years of university life. It has influenced countless decisions that my husband and I have made, prevented us from making unwise decisions, and given us the strength to hold on just a little longer when we were about to say something we should not have said. I have, on occasion, wondered how different our lives would be if we had been out of town that weekend and had missed his guidance.

9. From Monastery to Mission President

I am supposed to meet Vincenzo Conforte somewhere on Rome Temple Square and when I finally spot him, I know who he is immediately. There is a kindness and sensitivity in his face, that tells me. We thread our way back through the crowds on this morning, just after the first dedicatory session of the temple to find a place to sit down for an interview, but it is slow moving, because everyone wants to greet him.

8. Preparing a People for Holiness: Changes in the Temple Recommend Interview

President Russell M. Nelson said in this weekend’s conference, “in some respects, it is easier to build a temple than it is to build a people prepared for a temple.”  So much of the conference seemed to invite us to more holiness—more holy living.  I really felt the personal invitation to draw closer to the Lord, to beware of the subtleties and direct attacks of Satan and to do everything in my power to increase the quality of my daily devotions to God. Then, in the last talk by the Prophet, often titled Final Remarks, President Nelson announced an updated list of questions Church members will be asked when receiving a temple recommend.

7. “Yes, It’s True, But I Don’t Think They Like to Hear it Quite That Way”: What Spencer W. Kimball Told Elaine Cannon

Elaine Cannon was the general president of the Young Women from 1978 to 1984.  The Church’s attitude toward abortion and its opposition to the Equal Rights Amendment were unpopular in many circles at the time. One personal manifestation of this for Sister Cannon occurred in 1977. An international women’s conference was held that year, and Sister Cannon (prior to becoming YW general president) attended the conference with the general presidents of the Relief Society, Young Women, and Primary. When the conference voted on the Equal Rights Amendment, these sisters were faced with a loud crowd hissing and booing them when they voted against it. There is an important addition to this story, however, and it appears in Sister Cannon’s firsthand account of her meeting with President Kimball.

6. The Role that Family Angels Can Play in Our Lives

Has an angel ever helped you? The answer is a resounding yes, although you may not have known it at the moment.  It’s our privilege to receive help from these devoted beings.  It’s all part of a grand scheme to build upon relationships by assisting and sustaining each other through various estates of life.  We’re currently in our “Second Estate” but have a lot of family that previously lived on this earth and now are in their “Third Estate.”  They are often given power to help us.

5. Why the Rome Temple was “The Biggest Challenge I’ve Ever Undertaken”

For Bret Woods, project manager of the Rome Italy Temple, the challenges were front and center in his life. He had just finished managing the construction of the Gilbert, Arizona temple and had what looked like another assignment in Brazil, when he began to have some thoughts and feelings about the Rome Temple. “This didn’t make sense to me,” he said. “I already had my visa for Brazil. Then my director called me in and told me they had been praying about it and had received approval for me to go to Rome.” He was told it was an 18-month assignment. He and his family stayed four years.

Though it is estimated that 100,000 Latter-day Saints fought in World War II, and 5,000 lost their lives, it is not known how many of them participated in D-Day, that pivotal moment that changed the course of the war. On this 75th anniversary of the landing on 6 June 1944, we focus on one Latter-day Saint whom we know was there, not only because he left a diary and spoke at length with his son, Alex about his experience, but also because his memories have some surprises in them.

Pancho Villa needed help! In his lifetime, he had been a revolutionary leader, brilliant strategist and even the President of Mexico, but in the realm of spirits he was lost, and knew he needed assistance.  He came from beyond the grave to seek out and ask the one man who he felt could help him in his eternal quest.  Here’s how it happened.

2. Satan’s Plan is not what you think

by Mark A. Matthews

There is a lot of confusion about Satan’s plan among members of the Church. I first realized this while talking to a friend in college who explained that he would not attend a Church university because the Honor Code “forced students to be righteous” and was therefore “Satan’s Plan.” I heard this misunderstanding again while talking to parents who said they wish they could “force their kids to be righteous” but can’t because that is “Satan’s Plan.” I have even heard a few misguided Church members make the disturbing claim that establishing laws against elective abortion is “Satan’s Plan.”

1.  What I Want my Daughters to Understand about Eve

Since Adam has been alone, in creating Eve, the Lord has created a “help meet” for him. Here is where we sometimes get into trouble. It is in misunderstanding the idea of “help” or as it is sometimes translated “helper” that we run aground in estimating who Eve is and, by implication, all women. We sometimes suppose that this means that she is a subordinate assistant or that she is meant to be domestic help or that she is meant only to cater to the needs of others. Yet, “help” is much bigger and more powerful than this. In Hebrew, help is the word “ezer”.  In all of scripture, there are only two who are explicitly referred to as “ezer”—and that is Eve and God, Himself.