What the Public Thought of the Rome Temple | Meridian Magazine 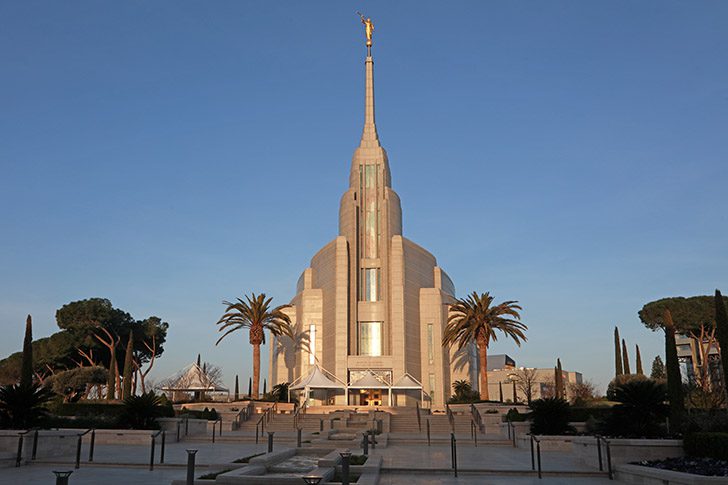 What the Public Thought of the Rome Temple

Meridian is in Rome covering the temple dedication. See all of our coverage at latterdaysaintmag.com/rome.

The building of a temple and the open house that follows brings a surge of good will, not only from the members, but from the public who gets a glimpse inside a temple that they won’t see again. Surprisingly the neighborhood starts to think of it as “our” temple. They become curious as they see it rise. They want to see inside.

For Rome, the neighborhood was vast because the temple can be seen from a major freeway, and it should be no surprise that 55,000 people came through during the three-week open house which was 28 Jan-16 Feb. 2019.

Elder Alessandro Dini Ciacci, an Area Authority Seventy, said, “We’ve seen people literally change their countenance as they come through. They would come through on what they thought would be a very casual walk-through and they would have no words by the time they got to the Visitors’ Center. We’ve seen people cry in the celestial room. We’ve seen people realize what we were talking about as we told them about the sealing ordinance. By now, they do know we’re Christians.

“What I’ve seen both from VIPs and from common people was the respect they had for what we do, for our beliefs. They may not be in agreement with some of the practices, but now they have great respect.

“Sometimes when people asked what they thought were tough questions, others in the group would say, ‘You should not ask that.’ The sacredness of the time made it not the right moment to ask certain questions.

“We’ve made great friends. We have started building great relationships with people. A very strong and respected person came on a VIP tour. She came merely as an institutional visit, but then she asked if she could come back another time just to enjoy the same feeling.

“She didn’t know how to describe the feeling, but when she came again, she brought another seven people. She said, ‘I want them to feel the same things I felt that day.’ That’s the kind of response we’ve had. People just loved what they saw. They respect us for what we can do and they have a greater understanding of our being Christians.”

Because people didn’t have the words for the spirit they felt in the temple, they said it was “beautiful” or “peaceful,” but often they just had no vocabulary for it. It was a joyous feeling. One-third of the people who left comment cards also said they would like to learn more.

Vincenzo Modugno, who worked on the temple history, said there was a family who came to visit the temple with two children ages five and seven. When the parents said, “Let’s go,” the little boy said, “I am praying,” so they waited for five or six minutes before he was finished.

Another twelve-year-old, who lived not far from the temple, came to the open house four times. Her mother explained, “She loved the idea that you have about life after death.” She wanted a Book of Mormon.

Vincenzo said, “People came to the temple in a spirit of curiosity and left with a different spirit, feeling moved.”

Sister Carlene Walker and her husband Elder Gordon Walker were called to help with the VIP open houses. She took notes in a meeting where volunteers helping with the open house were sharing their spiritual experiences. They reported:

A young Swiss Italian spoke of the Italian Saints who worked at the Swiss temple and what a strength they were to him. His parents couldn’t afford for the entire family to come to the open houses, so they let him come. Other volunteers had generously shared their food with him to ease his costs.

Another volunteer told of a neighbor who had hung a sheet on his balcony, facing the temple which read, “We don’t want any Mormons here!” When that neighbor came through the temple, her heart was softened and she was touched by the beauty. She apologized for her hard feelings.

A couple planning to divorce came to the temple together and when they looked into the mirrors in the sealing room and how they reflect the past and the future, they decided they no longer wanted to divorce. They came a second time, but first they called their attorneys to cancel their divorce.

Elder Walker led a group of 20 students through the temple who were on a study abroad program from St. John’s University in New York. Their teacher said, “I’ve met quite a few Latter-day Saints and they all have a kind of glow. They all seem happy, but I have wondered if that might be a kind of façade and the result of pressure.” That gave him the opportunity to bear testimony of the genuine happiness the gospel brings.

Gayle and Tom Holdman spent a day during the open house in front of the large stained glass mural they had created that encompasses the life, teachings and parables of the Savior in one place. A man spent some time looking at this, finding it agreed with what he believed. He finally asked, “Is there anything in this mural that is specific only to The Church of Jesus Christ of Latter-day Saints?” Gayle answered that there wasn’t anything that was only unique to us in that portrayal of Christ except for one thing. We believe that He lives and this personal ministering continues today. That is the difference.  What is unique in this mural you may not see.

In the mural, Jesus is reaching out with his left hand to lift up a boy who has been plagued by leprosy. His body and right hand are left open, as if the rest of us are invited to come and to heal.

When we asked one woman who works not far from the temple, why she came to the open house, she answered, “Because I wanted to say welcome.”

Work went on for a very long time creating the 2,000-member list for the VIP open house, which included leaders and officials in government, education, religion and business

Elder Walker said, “The very first day of the open house, the president of the municipality came and then asked if he could come back and bring his family. He returned two more times. He also sent out a letter that all the school kids in the area should come and their teachers should bring them. Many classes came on field trips.”

Calista Gingrich, Newt Gingrich’s wife, came in her capacity as US ambassador to the Holy See. Seeking to be better informed, she asked deep questions.

Sister Walker noted, “The response from the press was so great and so positive that the visitors to the temple just grew and grew. Every day brought more good articles. People came back multiple times and brought others.” CNN covered it. The New York Times stringer came and stayed from 10:00 until 5:00. Two Italian newspapers featured a photo of the temple on the front page. Reporters were moved in the temple and their stories reflected it. Positive press spread across Europe.”

Partly out of curiosity, partly out of respect, many religious people came, but especially Catholics. Nuns and priests came to the temple almost every day. (It would have been a great photo op to see a nun entering the temple.) One priest who had connections with Latter-day Saints from having lived in Washington DC was now transferred to the Vatican. He was very moved by the temple and asked the Walkers if he could give them a personal tour of St. Peter’s in return. Of course, they said yes.

The Catholics and Latter-day Saints have developed a healthy relationship, partly because often the Church does humanitarian projects with Catholic charities, and partly because we share many of the same values and concerns—including the unrelenting attack on religious freedom that has become a staple of secularity. It was easy for the visiting Catholics to find some commonality with the Latter-day Saints.

What also surprised visitors to the temple were the volunteers. They smiled endlessly in the wind and chill and were cheerful when they were soaked. They were willing to do any work assigned them, no matter what their profession was. They considered it a privilege to be there.

One family from Florence gave up all of their vacation time to come and serve for three weeks during the open house. Another four businessmen arrived together from the United States, willing to do any work that was needed. They had served Italian missions together years before, and this was a reunion they had planned for a very long time.

The open house became a time and place to ask questions they would never have asked at any other time. Elder Dini Ciacii said, “People wanted to know about our relationships with other specific religions. They wanted to know if what they had heard around was true or to verify something they saw in movies that are decades old. It is wonderful that they are asking questions because it gives us a chance to let them know the truth. We are not bothered by their questions whatever they may be. We are grateful they are asking their questions from the source, rather than googling for their information.”

“Thousands of people took that picture. I would tell them, ‘I will turn the lights off and you can go to the statues. You should have seen people just taking their phones and taking that picture or taking selfies. They wanted to create a memory. These are people who do not share our beliefs, but they felt something special in this place and they wanted to hold on to it.

“I took a hard-shelled journalist to stand before the statue of the Christus and it was just me and him. He said, “I feel peace here.” He must have felt safe saying it. That’s the miracle of this place. The Spirit of the Lord is here and people feel it.”

What a wonderful article to read and ponder. It reminds me of the wonderful feeling and experiences my husband and I had as volunteer tour guides during the open house for the Calgary temple in Alberta Canada. Thank you so much for sharing.

My husband and I were among the many volunteers, thank you for the shout out! Let me add that there were five couples who are serving missions at the Paris temple, who came for the duration of the open house, while the Paris temple was undergoing work. We couldn't have done it without them! The group was an eclectic mix of Italians, returned missionaries, senior couple missionaries, people with Italian ancestry, people who just felt inspired to come, etc. One of the volunteers, helping put shoe covers on visitors' feet, was an investigator there in Rome. He loved it. And special, special thanks has to go to the guys who managed parking on cold, rainy, windy nights, all by themselves out in the dark! Special thanks also goes to the fine brothers and sisters who managed the whole thing, volunteers all, sometimes under stressful circumstances. Every single one of us would call it a privilege!