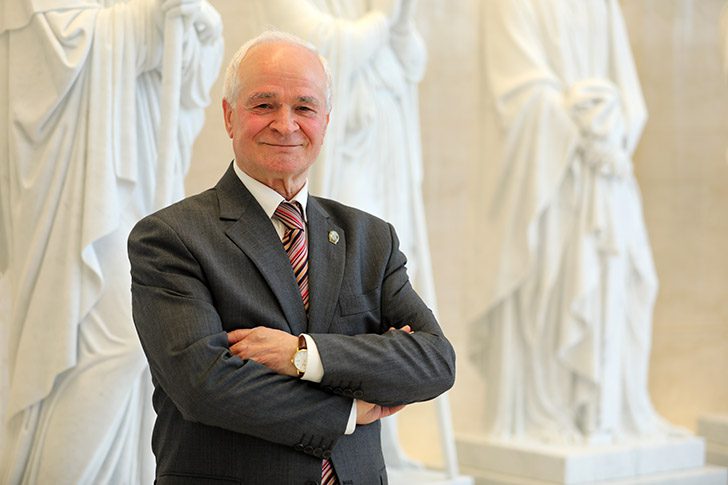 From Monastery to Mission President

Meridian was live at the Rome Temple dedication and collected the life stories of many Italian pioneers in the gospel. Read all of our coverage at www.latterdaysaintmag.com/Rome.

I am supposed to meet Vincenzo Conforte somewhere on Rome Temple Square and when I finally spot him, I know who he is immediately. There is a kindness and sensitivity in his face, that tells me. We thread our way back through the crowds on this morning, just after the first dedicatory session of the temple to find a place to sit down for an interview, but it is slow moving, because everyone wants to greet him.

They tell him he has impacted their life for good. They greet him with warmth and hugs. One woman said she was baptized the day after she first heard his testimony.

I have often wondered who are the pioneers in each land who hear the gospel and respond to the Spirit with such fervency that they can defy tradition and family pressure to join a faith that is tiny. Who are these people who become the backbone of the Church, meeting in little apartments with only a handful of others, when their peers attend church in sumptuous cathedrals? What spark has been lit in them? How is it that they came to influence so many others, especially when the Catholic Church has such dominance in this area?

It was in October of 1849 that Brigham Young approved the opening of Italy to the gospel and in 1850, Lorenzo Snow came on a mission here and dedicated the land of Italy.  Despite these early beginnings, the Italian mission was closed in 1867 and not reopened for 100 years when in 1966 President Ezra Taft Benson re-dedicated the land. The work was hard in Italy. Resistance was real. Rome was the centerpiece of a Christianity that dominated the world.

In 1912 Vincenzo di Francesco found a book with no title page in the road. He read it and felt supreme joy, but it took decades of searching before he learned that this book was the Book of Mormon. He wasn’t baptized until 1951. It wasn’t until 1980 that the first stake was formed in Italy, and not until 2005 that the first stake was created in Rome, only three years before the temple was announced.

Italy was not low-hanging fruit, easy to pick for the gospel, yet the Spirit moved strongly among those who joined as if they had been specifically chosen for this role when they were sent to earth.

Vincenzo Conforte grew up during World War II in a family with eight children that was desperately poor. His father had been a soldier in Germany, and when he returned from the war, jobs were impossible to find. His parents sent him, at age twelve, to a monastery, saying, “At least you can eat there and have a place to stay.” Because of monastery rules, he wouldn’t speak to his family again until he was 15.

Finally, he called them and said, “I can’t stay here.” He had seen too much that dismayed him. He came home, finding it impossible to be a Catholic, and so, in theory, became agnostic, a place he stayed until he was 38 years old in 1975.

He saw the missionaries from The Church of Jesus Christ preaching on the street. They told him about Joseph Smith and the First Vision and he came home and said to his wife, “These people are crazy.” Still, he said, “I suppose I was trying to find my God my whole life. I suppose the Lord prepared the way for the missionaries with me.” He was also upset with Americans in general over the wars in Korea and Vietnam. Somehow, despite these negative attitudes, Vincenzo invited the missionaries to come to his home.

After several meetings with him that didn’t seem to be going that well, one missionary companion, a greenie, said to the other, “I cannot come here anymore. We aren’t making any progress and there is a bad spirit here.” His companion, more patient, suggested that they go one more time, and if Vincenzo hadn’t changed, then they should abandon teaching him. They told Vincenzo that the next visit would be their last if things hadn’t changed.

“The next day in the morning,” President Conforte said, “I was alone driving in my car, and suddenly I felt by my side a presence.” Tears well up as he continues. “I was thinking about what the missionaries had told me, but when I felt this presence, I thought I must be imagining it.  He pulled the car over, got out and slapped his face a couple of times as if to bring himself back to reality and began to sing Italian songs—thinking this sense would go away.

Yet, when he got back into the car, the presence was still there. “I started to cry,” he said, and my singing turned into a prayer. I was asking the Lord to let me know if these missionaries were His representatives. That night when the missionaries came again, it was clear that Vincenzo had changed. They invited him to church and gave him an address on Via Colombo.

“What?” he said, “There is no church on Via Columbo. I know that road well.” As it turns out, church was in the missionaries’ apartment, which was a surprise to him. “What is this? Where are we?” he wondered, but the Spirit was strong. He said to his family, “OK, this is good for us,” and they were all baptized two weeks later.”

His parents were angry when they learned of this. “My father said, “You are doing a bad thing. This is not right for you.” My mother said, “You join the Church and you are not my child anymore.”

He answered, “When I did not know Christ, you were with me. Because I have found the Lord and I know who he is, you are against me? You will see. I will love you more than in past.”

His father-in-law sometimes made fun of the Church to which he responded, “Be careful.  For you these are funny things, but for me that are sacred. If you want me to visit you every week, stop this and have respect for my feelings.” His father-in-law stopped the comments and a year later when Vincenzo came to visit, he opened the door and said, “I want to know about your Church. If this Church changes you in such a short time, there is something about it that is true.” A year later, he and his wife were baptized.

Vincenzo was soon called to be the branch president to 15 or 16 people, which within three years became 97. At work he talked about the gospel, and when he came, the others would say, “The Mormon is here,” but they had great respect for him.

In 1985, because he was then district president in Bari, Elder Russell M. Nelson, met with him while touring the missions in Italy. Among the many things that Elder Nelson told him that day was that English was the official language of the Church and it would help immensely if he learned it.

Vincente Conforte was hearing this through the mouth of a translator, but the very next day he bought an English course and started to study. Six months later he was asked by Elder Nelson to meet him in Vienna. Elder Nelson marveled when he heard him speak English so well. He said, “Six months ago you didn’t speak any English and now you can!”

President Conforte said, “You are an apostle and you gave me a commandment.”

“I gave you a suggestion,” Elder Nelson answered.

“When an apostle of the Lord gives you a suggestion, it is a commandment,” he answered. At that meeting he was called as mission president of the Catania mission, a calling which he approached with the same dedication. Thinking about how to spread the word, he came up with the idea to approach journalists and civic clubs about the gospel.

When he arrived in the mission, he wrote a letter to many newspapers and civic and government officers explaining that he was the new mission president in the locality and he was here to serve.  If they would like to know more about the Church, they should call—and they did! He spoke to journalists, sent missionaries to speak on television, taught at the local civic club. He spoke about the apostasy and the restoration—a key topic of interest in Catholic Italy.

When he was transferring missionaries from one small city, the mayor called to say, “The people appreciate your missionaries because the spirit is so strong with them.” He gave him an opportunity to speak to 300 people at City Hall.

“I was a tool in the hand of the Lord,” he said. “I felt His guiding me most every day. I prayed strongly to the Lord and I fasted many times to receive His direction on how I should direct the missionaries. The best thing was to show by my example and my faithfulness and my longing to serve Jesus Christ.”

As he finished serving as mission president in Catania, it seemed he wasn’t done. He was then called to serve as mission president in Padua, then in the presidency of the Swiss temple, and then to be a Regional Representative of the Twelve. He also was one who helped in the process of getting recognition from the Italian government for the Church.

“I have a strong testimony of the Lord, Jesus Christ,” he said. “I love Him.” In fact, he cannot mention the name of the Lord without emotion. That love turned to action that so deeply touched a part of Italy, that President Nelson mentioned the name Vincenzo Conforte in his dedicatory talk as one who had helped shape the history of the Church in Italy. The Rome Temple was not built of building materials or art glass. It was built on the soul-stirring testimonies of people like Vincenzo Conforte.

How I love President and Sister Conforte. Reading this article over a year later is bringing tears to my eyes. I served with the Confortes as a missionary in Catania from 87-89. The love that I felt from President Conforte each time I met with him was profound and life changing for me. It taught me true Christlike love.

Pres Conforte used to call me "Super Uomo", Superman, every time we met. I love him. He's the kind that recharges your batteries with just a word, a touch or a gesture. He's no pushover, he's a tough guy. There's a reason he was a career military leader. Used to say that the United States was strong because it was "united", and that we can learn a lesson from that. I served with him in the Padova mission in the cities of Ancona, La Spezia, Livorno, Forli, Rimini and Pesaro 90-91. He and Sister Conforte are among those people with some of the strongest testimonies I've ever known. Italians have had so much adversity, it's hard to believe what it takes to join the church there. So proud of them for getting a temple. Well deserved! Tanti auguri a voi!