“We are the Gatherers”: Elder and Sister Bednar’s Practical Advice on How We Can Personalize the Gathering of Israel | Meridian Magazine 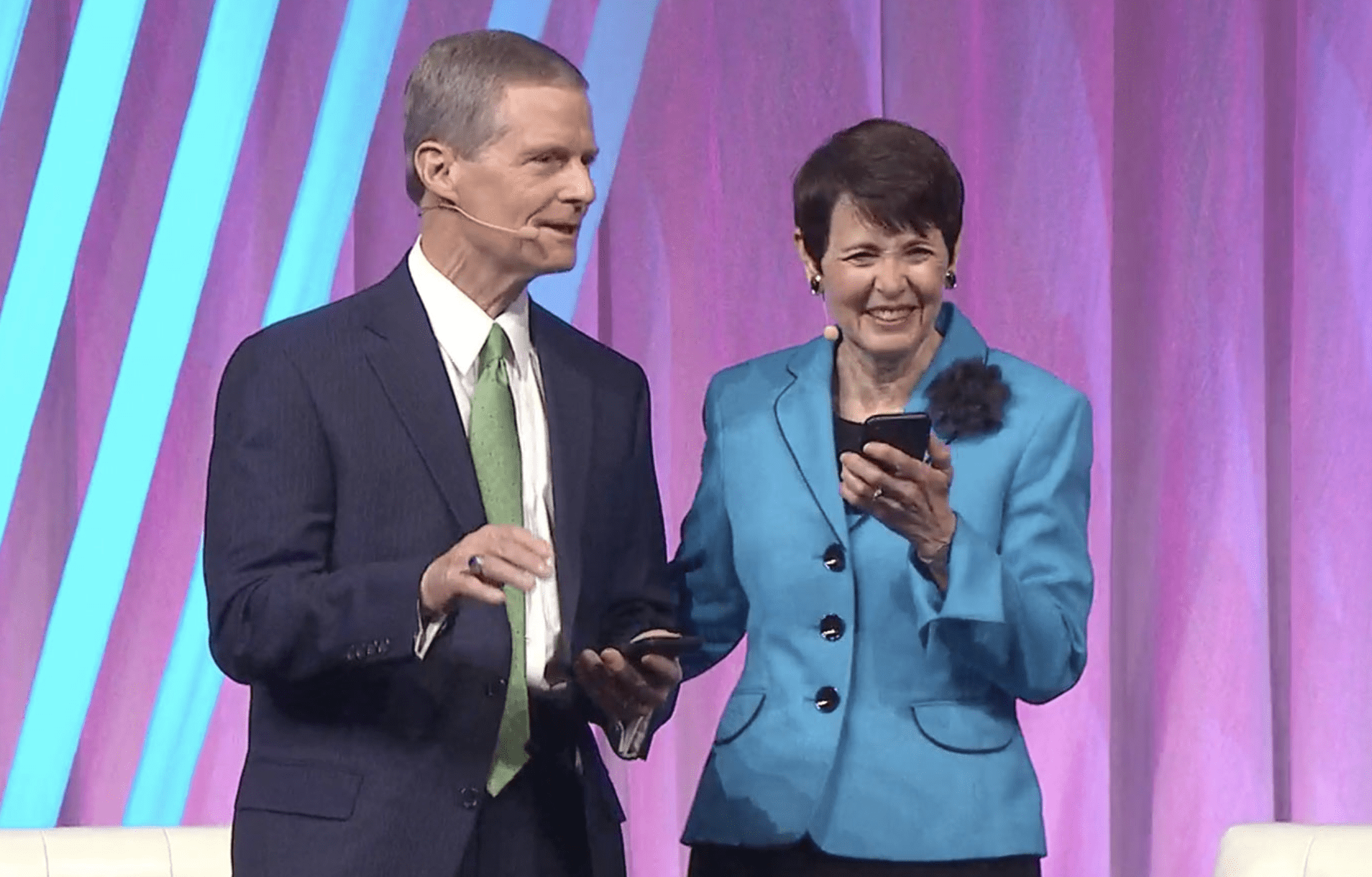 “We are the Gatherers”: Elder and Sister Bednar’s Practical Advice on How We Can Personalize the Gathering of Israel

This past weekend saw thousands flood the Salt Palace Convention Center in Salt Lake City as part of the annual RootsTech Conference, the largest family history gathering of its kind in the world. Attendees came to hear speakers, attend classes and learn about new technology to help them on their quest to deepen their involvement in family history. But more likely than not, the fire for family that burns in those that made such an effort to be there is not a general or vague one, but was probably sparked by the intimate details of a specific story or ancestor.

We connect to personal details in a different way than we do to big ideas and feel empowered by specific suggestions and goals that can make a grand concept seem suddenly like something we can play a particular and integral part in.

In their keynote address at this year’s Family Discovery Day, Elder David A. and Sister Susan Bednar shared practical insights that can help to personalize our role in the gathering of Israel; a concept that may otherwise seem too big to comprehend.

Elder Bednar took the opportunity to share a story from his own family history that has had an impact on him. It was, for him, the kind of specific piece of heritage that sunk deep in his heart and might have inspired his attendance at an event like this, were he not already there to speak.

He told of Luke Syphus, his third-great-grandfather from England and his wife, Christiana Long. After each had individually found the Church and been baptized, they married and not long after, decided to immigrate to Australia. The voyage across the ocean to get there was a trying one. A journey that was originally meant to take three months, took five. And after Christiana gave birth to their first son, Luke, onboard, the journey took the life of the infant as well.

During that time, the couple made the acquaintance of a man named Joseph Ridges and his wife, Adelaide. Though the Ridges were not members of the Church, Elder Bednar explained that “they were impressed by the demeanor and the devotion of Luke and Christiana, especially as they bore the sadness of the passing of their child.”

Upon arriving in Australia, Luke and Joseph decided to go into the lumber business together. Not long after, Joseph and Adelaide were taught by the missionaries and joined the Church. As a child growing up in London, Joseph Ridges had learned some of the basic elements of building organs. Over the course of their business dealings with lumber, he used some of the material to construct an organ, which he later donated to the Church to be in the adobe tabernacle in Salt Lake City. Later, after all four had immigrated to the Salt Lake valley, Ridges was asked to construct an organ for the new tabernacle, which became the core of the beautiful and iconic instrument we are all familiar with today.

“When I first learned of that story when I was a little boy,” said Elder Bednar, “it always struck me that Luke and Christiana, in a very normal and natural way—by living the Gospel—were fantastic missionaries. And the very simple things they did that influenced Joseph and Adelaide, produced a result that no one could have seen at that time. I’ve always just been impressed by the simplicity of doing missionary work and the long-term impact it can have in so many lives.”

After recounting the story, Sister Bednar asked if her husband could sum up what telling the story had made him feel in just a few words. He said, “gratitude, simplicity, and love.”

Family Discovery Day is interactive by nature and so next it was the audience’s turn, at the request of the Bednars, to turn to their neighbors and share the impact of their own family stories followed by a few words of why it meant something to them.

Elder Bednar showed the audience the following image to capture the words that are most frequently used to describe the feelings of those that participate in an experience like this one:

The larger the word, the more frequently it is mentioned and Elder Bednar commented that the very same set of words could be utilized to describe the fruits of the spirit.

“But the fruit of the Spirit is love, joy, peace, longsuffering, gentleness, goodness, faith,…meekness and temperance” Galatians 5:22-23.

Though their address would go on to present two different, more technology-centered ways to gather Israel; ways to utilize the Family Tree app to find names and prepare ordinances to be performed in the temple, this first experience was the part that impressed me. Through the simple request to share a little of your legacy with a neighbor, the Bednars taught us a practical way to bring the Spirit into our interactions as we learn to connect with our neighbors both inside and outside of the Church.

“Sometimes people become so focused on gathering that they actually make it more complicated than it needs to be,” commented Sister Bednar. Though finding names and ordinances is essential to the work of salvation on the other side of the veil, we can play our personal part in the gathering of Israel here by reaching out in simple, but profound moments of connection like this one. The Spirit will ultimately be the gatherer, but we can be gatherers and instruments as well, as we facilitate opportunities for the Spirit to be present in our interactions with others.

As illustrated by Elder Bednar’s ancestral story, even the simple effort of living the gospel daily can have an influence on those that observe that may have a lasting impact. And just like the Bednars’ suggested experience of sharing something from your family history with a neighbor, even small efforts to reach out and connect with someone in love can bring the Spirit and play a role in their developing a desire for further opportunities to feel that Spirit in their lives.

“These very simple conversations, stimulated by inspired questions, can invite our friends and family members onto a path of discovery giving them an opportunity to act and thereby open their hearts to the power of the Holy Ghost and the spirit of Elijah,” explained Elder Bednar, “The Spirit is essential because gathering is an eternally important work.”

And just like that, the “gathering of Israel”, a concept that can sometime seem ancient and esoteric and hard to understand, became something personal that we can each play a part in.

“In all the ages,” said Sister Bednar, quoting the prophet Joseph Smith, “the divine purpose of gathering the people of God is to build temples so his children can receive the highest ordinances and thereby gain eternal life.”

Not only can they gain eternal life, but they can have the strength and comfort of covenants in this life, as well as being blessed by the guidance of the Holy Spirit through the complexity and confusion that so often punctuates our mortal experiences.

As it says in the Book of Mormon:

“Yea, they shall not be beaten down by the storm at the last day; yea, neither shall they be harrowed up by the whirlwinds; but when the astorm cometh they shall be gathered together in their place, that the storm cannot penetrate to them; yea, neither shall they be driven with fierce winds whithersoever the enemy listeth to carry them” (Alma 26:6).

The storms will inevitably come, but when we are gathered in as one and under the power and protection of the Lord, we can be sheltered from them. And we can start taking simple, practical steps toward that gathering—even today—by starting with an inspired question and reaching out in love and connection to those around us.

As the Bednars repeated many times throughout their address, “You can do this.”

“Brothers and sisters, we live in a remarkable season of this latter-day dispensation,” said Elder Bednar, “The prophet Joseph Smith taught, ‘We are the favored people that God has made choice of to bring about the latter-day glory. It is left for us to see, participate in, and help to roll forward the latter-day glory; a work that God and angels have contemplated with delight for generations past; that fired the souls of the ancient patriarchs and prophets; a work that is destined to bring about the destruction of the powers of darkness, the renovation of the earth, the glory of God and the salvation of the human family.’ These are our days and we are the gatherers.”

“I promise that as you consistently act and do the very simple things you know you should do, you will become ever more effective in the work of gathering Israel and you will help many individuals and families on both sides of the veil. Your capability and service will be magnified. I promise the doors will open. Heavenly help will be available to you and you will blessed to know that you can do this.”