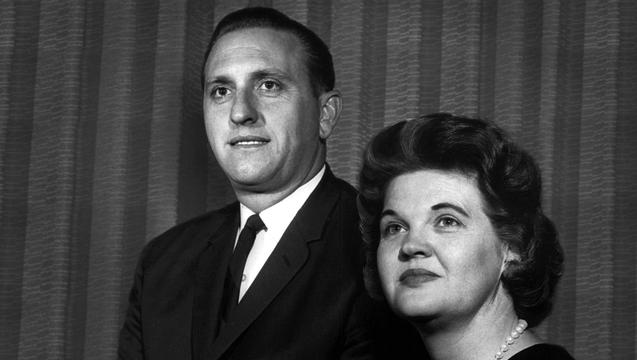 His Name is Tommy Monson

Across the reception hall the tall, well-dressed man left his post in the receiving line and strode straight to me. He reached out and put my tie between his fingers and proclaimed, “It’s a confident businessman who wears a yellow tie. How are you this evening?”

That wasn’t my first encounter with Elder Thomas Monson.

I first met him as a young teen flying alone from San Francisco to Salt Lake City. Somehow I was put in 1stClass. As I relaxed in my seat, a very tall fellow boarded the flight with a smile as wide as the aisle. I knew who he was. Elder Thomas S. Monson, who had just recently been called to the Quorum of the Twelve Apostles of the Church of Jesus Christ of Latter-Day Saints. Callings didn’t come much bigger than that in this church.

He smiled down at me and asked him to excuse him as he stepped around my knees and settled his tall frame into the seat better suited for him than me. Instantly, before putting on his seat belt, he thrust out his hand, “Hello. I’m Elder Tom Monson. What’s your name?”

I presented myself in a stammering way that didn’t matter to him.  He listened and then asked me if I was a Boy Scout. We talked about campouts, knots and scout nonsense for a while. He laughed a lot and asked me more questions about my life. Soon the flight attendant let us know it was time to put our seats up and prepare for landing. We’d spent nearly two hours talking about me. He shook my hand as he left the plane and said, “You’ll be a fine missionary some day. But don’t grow up too fast.” With that he was gone.

As I sat in the south balcony near the Tabernacle Choir I thought about that chance encounter with a man who had only been an apostle a short time. By now, years had passed and I was at BYU. He was doing what he’d done for decades and was about ready to speak at General Conference. As he spoke I noticed the young man in front of me, not much older than I, starting to breathe heavily and heave his body sideways and then rock forward and back. Suddenly he jumped from his seat and shouted, “That’s enough, Elder Monson, and…” I couldn’t make out what he said as he stepped into the aisle and began ranting as he walked down the aisle of the balcony. Before he got to the bannister, perhaps to leap over it, he was tackled by at least two security guards. I looked up to Elder Monson who had not flinched, nor stopped speaking during this disturbance. As the guards picked up the young man, Elder Monson continued in his Monsoneque fashion as if he’d been unaware of the ruckus. In a Tabernacle where you could hear a pin drop, no doubt the yelling had been noticed, but made no impression on the speaker.

I reminded him of that ruckus and also my flight with him when I met him as a missionary in Brisbane, Australia. I wondered if he was really good at faking remembrance but he said some things that left no doubt he remembered that scout from the plane – he brought up the scouting stories again. In his sermon to the Elders, Sisters and couples, he began by telling us that he had just come from the Pacific islands where he was met by the Mission President, Elder Waters, his counselor Elder Flood and Elder Reigns and there he was Elder Monsoon. We all laughed and groaned but enjoyed his sense of humor.

That night at the fireside open to all, he spoke in his undulating pattern of amusing and serious applications of gospel service. Perhaps I listened more that night because we’d brought a lady who had been taught by other missionaries before we’d given her the full set of discussions, yet she could not take the next step of baptism. She explained how she loved what she’d been taught, her extensive reading of the Book of Mormon and the Bible; that it all made the greatest sense but she just didn’t “know if it was true.” I had no other answers but to suggest she attend the fireside and listen to an apostle. She sat next to us listening with real intent. After Elder Monson concluded and sat for a moment, he stood and walked back to the podium and said he felt impressed that he needed to shake our hands and meet each of us, so for us not to be shocked when he walked to the rear door of the Kangaroo Point Chapel during the closing song.

When the final Amens were said to the evening’s closing benediction, the hundreds of people who had filled the chapel began filing out that back door. I could see him towering over the people with a large smile, reaching down to grasp each hand. As we approached I could hear him tell each person, “thank you for coming… good to meet you… thank you for coming…” and so forth. Many had shaken his hand before us so when it came our turn I expected more of the same. He shook my hand and said, “good to see you…” and then stopped, looked down at the sister with us, smiled, reached for her hand and held it a moment. Then quietly he said to her, “Sister, it’s true.” It seemed longer than a moment; far longer. And then he went back to greeting and shaking people’s hands.

The lady with us managed to get away from us through the crowd and we found her at the balcony rail of the outdoor patio. Tears were streaming down her face as she smiled and nodded her head in affirmation of the witness she had received. Her baptism followed the next week.

At the open house for the President’s Club of Ricks College, while my wife and I waited for our turn to go through the reception line, I was telling Elizabeth about that fireside more than 30 years before in Australia when Elder Monson walked toward us. After he had finished admiring my tie, I told him the last time I had met him he’d told us about meet President Waters in the Pacific islands, and then he finished retelling the story. He didn’t miss a word from what he’d told us in Brisbane. I think my wife was surprised to find out that I hadn’t made up a single thing.

When we all finished chuckling over that story, I quickly retold him the story of the sister who he had helped so much. His smile left and in a deeply somber mood he thanked me for sharing that with him, that he hadn’t known the reason for him going to the back to shake hands but did so now. He again thanked me and wished Elizabeth and I all the best.

I didn’t see him for years after that and only briefly when we drove by his home in Midway, Utah, and waved to him as he was in his yard with a rake, wearing blue jeans and a plaid shirt, doing what everyone else did on a Saturday afternoon, just being the person that he’d been when they used to call him Tommy Monson instead of President.

Good job, Mark. Thanks for telling those inspirational stories and for you and Elizabeth living as faithful saints.

I too was at the tabernacle the day the man in the south balcony began shouting what the author of this article stated. I believe I was 18 or 19 at the time. I was too late that day to be seated and was standing (with others) in the entryway of a door on the north side towards the west end of the Tabernacle. I can attest to the fact that Elder Monson glanced briefly towards the south balcony but never missed a beat in his tone or delivery. As the ushers converged on the disrupter I knew they would likely be bringing him out at the entry/exit point directly opposite me, on the south side of the Tabernacle. Being young, immature and a rubbernecker I trotted around to that south side just as they were carrying the man out. He was limp as a dish rag. No doubt his energy and adrenalin had been spent on his actions and perhaps exerting himself against the husky ushers. Elder Monson had remained calm, cool and collected. If readers have not yet read his biography it's a must-read. In reading his biography I realized he and I received our patriarchal blessings from the same individual and that was a fun bit of trivia to discover.