Then They Came For Jefferson | Meridian Magazine 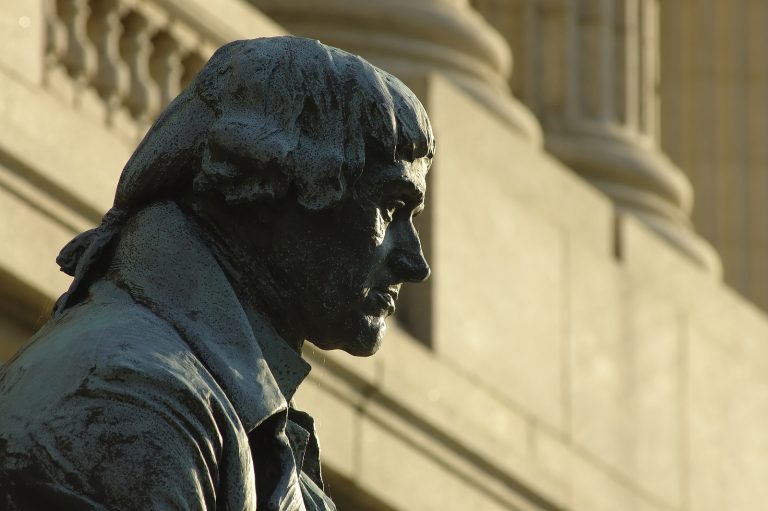 Then They Came For Jefferson

Last Sunday, on June 14, 2020, another threshold was passed in the United States.  Whether it’s a measurable step towards justice—or chaos—depends partly on your socio-political leaning.

Last week in Portland, it was Thomas Jefferson’s statue that was felled in America for the first time:  the author of the Declaration of Independence.

Yep.  Four days later, after burning an American flag on its stone head and spray-painting “genocidal colonist” on the side, protesters pulled down a 100-year old statue to the father of our country accompanied by a chorus of wild cheers you might expect on the last drive of a football game. Other graffiti around the toppled statue included, “White fragility,” “Damn white men,” and “Defund white men.”

Protesters in northeast Portland have pulled down a statue of George Washington pic.twitter.com/5tOzAVbUp5

George Washington memorials in Baltimore and Chicago were also defaced this week—littered with spray-painted messages of “destroy racists” and “burn down the White House,” and in one case, a white hood and gown placed over top.

It’s possible, of course, that it is outlier agitators pulling down these statues, in an attempt to intentionally inflame divisions in America. If so, then we might still expect widespread public condemnation for the destruction of these statues across the political spectrum and in national newspapers.

But in the week since Jefferson’s statue came down, there were only sporadic mentions of the incident in national media—and remarkably little concern.  Indeed, one CNN analyst argued the time had come that all Thomas Jefferson and George Washington statues should be removed.

While many citizens expressed outrage in social media, many others offered various justifications. Cheering the acts, one man declared, “they were despicable human beings. Monsters.” Another commentator said, “History’s being made. Some hope renewed.”  Referring to Jefferson and Washington’s statues coming down, another person insisted, “these people ARE symbols of imperialism and colonialism.”

It’s sadly true that like other wealthy Virginia landowners, Thomas Jefferson and George Washington both owned slaves. So why wouldn’t the removal of their statues also be celebrated as another step towards justice and equality in America?

Because these were two of the men most responsible for bequeathing us exactly this legacy: a country where the pursuit of the ideal of equality is even possible.

“We hold these truths to be self-evident, that all men are created equal, that they are endowed by their Creator with certain unalienable Rights, that among these are Life, Liberty and the pursuit of Happiness.”

Like most human beings who have lived since those words were penned, Jefferson and Washington themselves failed in important respects to live up to these ideals. Their failure to do so should not be ignored—especially in a day when urgent progress needs to be made in advancing racial equality.  Jefferson’s sin was particularly egregious and hypocritical, as a life-long slave owner.

Yet as we look back on early historical figures, both secular and sacred, Americans can be very quick indeed to do the very thing they often say they loath: imposing their own worldview (“Ethnocentrism” as it’s called in anthropology).

In so doing, we so often judge people from the past by standards that would have been foreign and radically strange to their time.

No, that doesn’t justify previous actions (or inactions). Moral failings are failings then or now.  And like God himself, we ought not “look on sin with the least degree of allowance.”

So, it should be painful and confusing to understand why the man who proclaimed the inalienable rights of liberty and the equal creation of all could own 600 human beings—men, women and children—in his lifetime. (Washington owned 123 individuals – and made provisions for their freedom in his will).

To modern eyes and ears, both histories are baffling—and yes, even hypocritical.

Is the answer to reject everything else Jefferson—or Washington—accomplished in their lives?  To condemn them each as nothing more than a “slave owner,” as the graffiti on Jefferson’s statue labeled him?

How would any of us like to be judged by our worst choices—to have the legacy of our lives wholly defined by our dumbest and most morally inept actions?

Most of us would be sickened at the thought.  Yet that’s precisely the contour of American retrospective and retributive justice today.

Never mind all that.

They were racist.  And that’s all that matters.

Similar rationales have led some to condemn Brigham Young for harboring racist attitudes, while ignoring his own vast legacy of good in his life—with one of his statues defaced this week as well.

On that same basis, Ulysses S. Grant’s statue was torn down two days after Washington’s in San Francisco by a group of 400 people; Francis Scott Key’s statue shortly followed.  Despite acting as the commanding general that defeated the confederacy in the Civil War, helping ratify the Fifteenth Amendment which gave blacks the right to vote, fighting for the rights of former slaves and encouraging laws to limit the KKK, Grant allowed pardons of former Confederate leaders and owned one slave before the war (when he was freed).

And despite penning the lyrics of the Star-Spangled Banner, Key had a mixed record on slavery (owning slaves, but freeing many later; advocating against slavery, but critiquing the abolition position as well).

But the mob’s verdict on both?

Off with their heads! Or as one commentator insisted, “There is no reason to leave these effigies to people who did horrible, inhuman things standing. It’s beyond time we get over the lies we were told in school about these supposed American heroes and acknowledge that they did s** things and shouldn’t be idolized for them.”

If not idolize, how about recognize positive contributions? And honor the good they did for our country?

To be clear, we’re not talking here about the toppling of statues representing confederate leaders or colonizers across the nation. It’s not hard to appreciate the rationale for these changes—and even to agree with them. But we are also not talking about statues put up by the KKK to impose fear and strengthen Jim Crow laws.

It’s also worth pointing out that there is a meaningful and challenging question in all this:  How are we to evaluate someone’s life as a whole, when it contains both wonderful and unflattering patterns?

That’s not an easy query – and one that undoubtedly even the best judge would (and should) wrestle with. It is sometimes said that “only God” can judge another’s life perfectly and definitively, since we do not and cannot know all the details – nor what is in someone’s heart.

For the rest of us, is it better to err on the side of condemning the bad – or appreciating the good?

Or, maybe both?  For those who believe in a God who looks with mercy on the totality of our lives thanks to the interceding blood of His son, perhaps we can acknowledge the wrong, while also seeing it with a measure of the same grace we seek in our own lives, and for our own failings.

Perhaps that can restrain our tendency to condemn anything concerning around us.  As the one perfect example Himself might say, “He who is without sin, let him tear down the statue.”

As we decide what symbols we should have in our public squares, our question should not be, “has this individual done anything that should not be honored?”

With few exceptions, the answer to that throughout the annals of human history would invariably be yes. Instead, maybe we can ask, “does this person represent a virtue we wish to pass on?”

Of course. There’s something powerful in their lives we wanted to draw attention to—something that presses us to aspire for even more freedom and equality today.

Maybe that’s why—while there is growing agreement on confederate monuments (52% in a recent poll)—that is simply not the case with tearing down memorials to our founders.

As Rich Lowry writes for the National Review, “do we demand that all our heroes be spotless, uncomplicated and without sin?” He adds, “That Jefferson was deeply compromised by the slave system and yet rose above his own sectional and selfish interests to enunciate timeless principles should be considered an accomplishment, not a reason to relegate him to the ash heap.”

Yes, without question, there are sins America must make restitution for—and wounds we must heal as a people.

But this is not the way.  To burn down our foundation does not allow us to build anything more beautiful upon it one day—which is precisely where we ought to aspire.  As Harvard political scientist Samuel Huntington once wrote, “Critics say America is a lie because it’s reality falls so short of its ideals.  They’re wrong. America is not a lie, it’s a disappointment.  But it can be a disappointment only because it is also a hope.”

Thank you for the article. We are now seeing mob rule because the elected government officials will not act. It truly is a time in our country‘s history where right and good are declared wrong and evil.

A timely and well thought out article. Thank you.