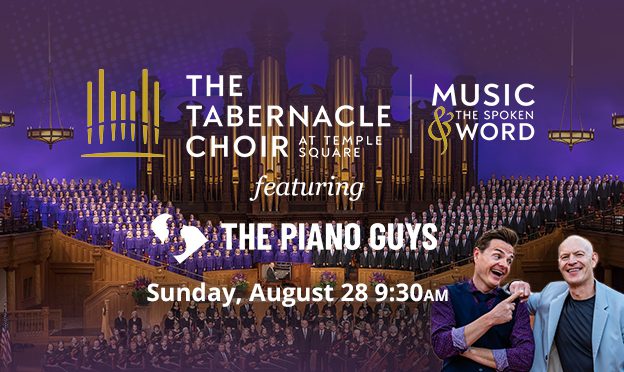 YouTube sensation The Piano Guys will join The Tabernacle Choir at Temple Square for its weekly broadcast, Music & the Spoken Word, on Sunday, August 28, 2022. This is the first time the piano and cello combo of Jon Schmidt and Steven Sharp Nelson will take to the stage with the Choir. Both The Piano Guys and The Tabernacle Choir have similar musical goals to positively impact the lives of others through inspirational music. This special program will showcase the unique pairing of these special guest artists and the Choir.

Of performing with the Choir, Nelson said, “We’ve been practicing very hard over the last who- knows-how-many years to build up enough musical acumen to perform with the greatest choir and orchestra in the world. To perform together has been something we’ve sincerely dreamed of doing ever since we were mini musicians. We are elated at this opportunity!”

In an expression of thanks for The Piano Guys performance on Sunday, the Choir presented a $25,000 donation to Make-A-Wish Utah on their behalf. The presentation took place at the Choir’s Thursday night rehearsal on August 25th in the Conference Center.

Make-A-Wish Utah brings to life wishes for children with critical illnesses. A wish can replace fear with confidence, sadness with joy and anxiety with hope. In fact, research shows children who have wishes granted can build the physical and emotional strength they need to fight a critical illness.

The Piano Guys gained popularity through YouTube beginning in 2011, when they began posting videos combining classical, pop, film scores, and original music. They showcased their music through elaborate or cinematic videos at iconic locations such as the Great Wall of China, Iguazu Falls on the border of Argentina and Brazil, and Petra in the Middle East.

The Piano Guys have more than two billion views on their YouTube channel and over seven million subscribers. They released seven studio albums on Sony Masterworks, each debuting at number one on the Billboard Magazine® Classical Albums or New Age Albums charts. The Piano Guys have amassed more than one billion music streams, and the group will be releasing several new songs and music videos in 2022. They are known for their versions of One Direction’s “What Makes You Beautiful,” Frozen’s “Let It Go,” Ed Sheeran’s “Perfect,” and Christina Perri’s “A Thousand Years.”

The duo has appeared on major TV programs worldwide and in sold-out shows around the globe— from London’s Royal Albert Hall to New York’s Carnegie Hall to the Sydney Opera House to major venues in the United States including Red Rocks, Wolf Trap, and Ravinia. Over the years, The Tabernacle Choir has also performed on each of these storied stages.

Tickets are not required for this special Sunday morning performance of Music & The Spoken Word, but attendance is limited to those eight years old and older. Ample seating is available in the Conference Center where the Choir performs each summer. Those attending the live performance should be in their seats by 9:15 a.m.; the 30-minute broadcast begins at 9:30 a.m. As always, audiences can livestream Music & the Spoken Word from anywhere in the world. It will also be available for on-demand viewing after the broadcast ends.

The Choir returns to the Tabernacle for Sunday morning broadcasts beginning on September 11, 2022, and then moves back to the Conference Center at the end of November for the Christmas performances.