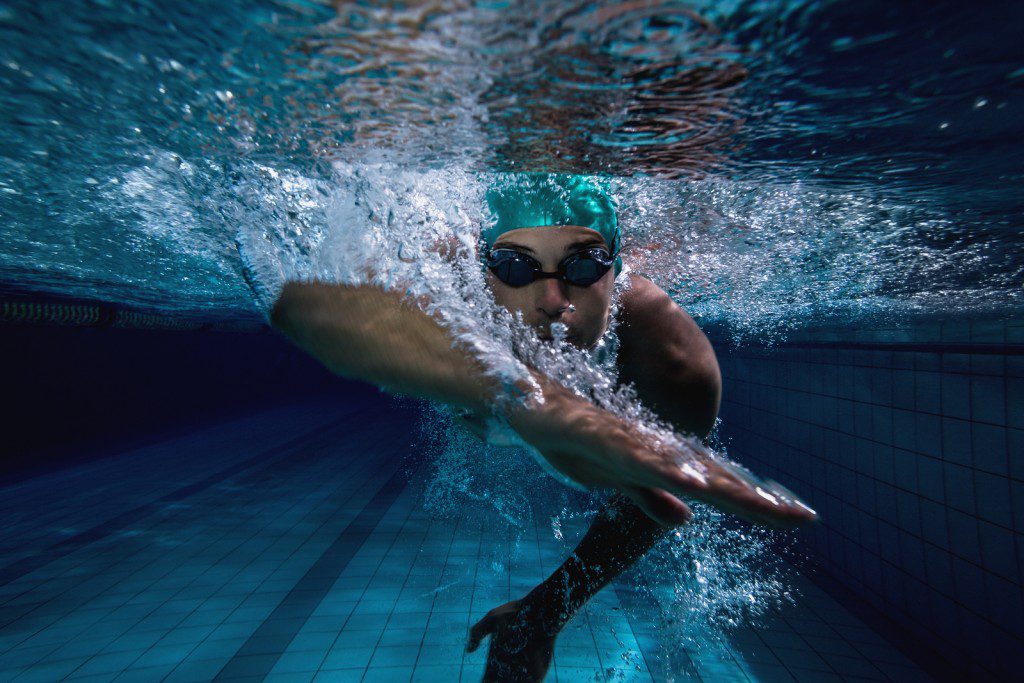 The air was sticky with moisture and it was noisy from the sound of parents and siblings talking in between heats. The next heat of swimmers was on the blocks ready to swim the 400-meter freestyle event. The age group of swimmers was 13 to 14 year olds.

As I observed the young boys standing on the blocks I quickly guessed who would likely win the race. There was one young man who was tall and very muscular. He seemed confident standing there.

“Surely, that young man will win this race,” I thought.

All the other swimmers looked pretty average and were noticeably more nervous.

The gun fired and the swimmers dove into the glimmering swimming pool. Then the cheering began.

The swimmer I chose to be the winner was instantly in the lead. It was inspiring to see him swim. His power was evident. I started thinking about how the high schools would try to court him to be in their programs and how he would likely get a college scholarship for swimming. I even wondered if one day he would win the Olympics.

By the time this crowd favorite had turned for his third lap I noticed someone new. One swimmer, in the far lane, was just getting to the end of his first lap. The majority of the swimmers were about a half a lap behind the leader, but this one swimmer was over a lap behind. He would lose the race for sure.

The arm strokes on the swimmer in the back of the group were slower and not as powerful. Each one looked like a struggle for the young man. It also looked like his arms were getting tired. Immediately my heart reached out to the young man. I stopped watching the leader and focused my attention and all my hopes on this losing swimmer.

As time went on the lead swimmer and the others lapped the slower swimmer many times. He seemed to get slower and slower.

As predicted, the strong young man who had led the race all along won the heat. The crowd cheered and he turned and smiled.

Soon all the swimmers were smiling at the wall except one swimmer; the boy in the far lane. He still had almost three laps to swim.

The crowd was silent. Everyone was focusing in on the far lane. Simultaneously, I could feel the hearts of the entire crowd reach out to this young man. We all watched in silence for about a half a lap; hoping the boy would have enough strength to finish the race. I said a silent prayer for him as I saw his arms struggle more and more. He was not a smooth, strong swimmer. He was clunky and awkward, but he was doing his best.

Soon my ears started ringing. The silence in the building had changed instantly to unified cheering. Everyone wanted that young man to finish the race. They could see him struggling, yet were inspired by his courage and willpower. He kept going.

I don’t know how many minutes we all stood on our benches and cheered, but it seemed like a long time.

In all my years of watching and participating in sports I had never experienced a sight like this at a sporting event quite like this. Just when I thought the building couldn’t get any louder, the young man touched the wall to end his race. The crowd let him know how much they enjoyed witnessing the fight of his spirit to succeed. He finished the race. That accomplishment was suddenly somehow much more important than who had won the race. Even the winner knew it as he embraced the boy in the far lane.

Many in the crowd, including me, wept.

This final swimmer didn’t have any special physical limitations. He was just less skilled and slow. I think that’s why this event was so memorable to me. His race was symbolic of how so many people feel while they’re “swimming” through life.

They’re swimming deep water and don’t feel like they have the skills or strength they need to win the race. It’s discouraging at times and a true test for the human spirit, but this young man proved that finishing the race when it’s hard is actually the greater victory.

The Heart of Success

I don’t know the name of that young swimmer I saw years ago. I don’t even know what town he’s from, but I do know why he finished his race. It was easy for all to see his will to complete what he had started was powerful, even though his body wasn’t.

Every Olympics there are stories of underdogs who don’t seem to have a chance. Sometimes these underdogs beat the odds and not only finish but also sometimes even win. I think this is why the Olympics is always so inspiring to watch. It’s a global event dedicated to acknowledging and honoring the spirit in each person; the will of the soul.

Training the will is called self-government. Self-government is the moment when the will or spirit of the person takes leadership over the body and mind of the person. Whenever this happens a person is infinitely stronger than they ever thought they would be. Physical strength is nothing to the strength of the will.

To strengthen the will it must be regularly put to the test. Any sport or type of personal exercise is great training for the will, but a person doesn’t have to participate in physical activity to develop an iron will.

Each day there are moments where we can use willpower. Just getting out of bed is an act of willpower. It’s the victory that starts the day out right. Besides waking up, we use willpower to turn off the TV, computer or phone to connect with family. We use willpower to not eat one more cookie, as well as to exercise.

When we’re young some of our first opportunities to practice strengthening the will come from our parents. When parents instruct or give no answers to a child, the child has to learn to be okay and say “okay.” At first this can be incredibly difficult for the “strong-willed child.”

In recent years there has been a lot of talk about strong-willed children. As a strong-willed person myself, I find all the frustration about strong-willed children confusing. Strong-willed people are the very best at controlling their wills. This means they have the ability to be the very best at doing what’s right, being obedient, and self-governing. I know; I changed from disobedient to parents to obedient to parents in one moment at age 14. After I logically decided it was a good idea to be okay and say “okay” when parents instructed or corrected, I tested the power of my will one time by choosing to do a chore I didn’t like. After finding joy when I chose to be okay and say “okay” to a chore I didn’t like, I decided never to make excuses and disconnect from parents again when they gave instructions.

This decision made for the best teen years possible. My parents trusted me because I followed their instructions and accepted their “no” answers. I was also happy because I knew my will had chosen to be okay with chores and obedience. And finally, I had a close connection to my parents through the hardest years a person has: their teen years.

Yes, parents teach children to use their wills by teaching the children obedience. If presented calmly and deliberately, the child — even the strong-willed child — will turn their heart toward their parents and find strength and power they never knew they had. That’s willpower!

For information on how to set up an environment that strong-willed children thrive in, visit: https://teachingselfgovernment.com