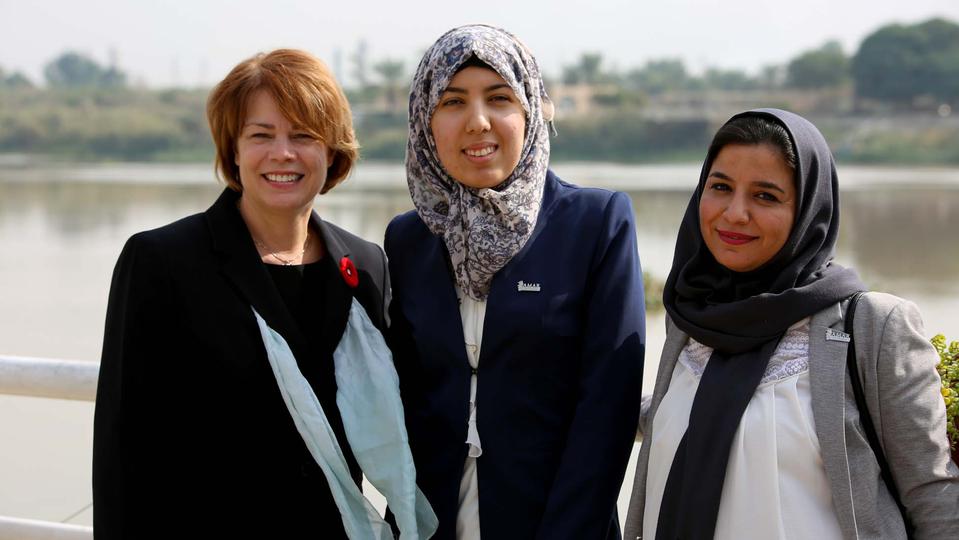 Sister Eubank Shares About Religious Conference in Iraq, Being Introduced as “Father Eubank”

Thanks to LDSDaily for bringing this story to our attention.

In a recent post on social media, Sharon Eubank, first counselor in the Relief Society General Presidency, shared her personal experiences from her recent visit to Iraq to discuss religious freedom and intolerance. Organizers at the conference were so expecting to have a male religious leader that when she stood, there was an “audible gasp”.

The discussion that followed, led Sister Eubank to ponder on and pose an important question. We welcome any reader insights on possible answers to that question. Here are her reflections in her own words:

Recently I traveled to Baghdad, Iraq, to meet with religious leaders and politicians to find practical actions to end religious persecution. When it came time for my panel, I was announced as “Father Eubank.” I walked up to the dais along with my co-panelists from a variety of faiths and there was an audible gasp from the audience, who were not expecting a female leader. After the surprise receded, this panel spoke movingly about why freedom of religion and conscience is perhaps the great relevant issue of the 21st century. So much modern conflict and displacement is being driven by religious persecution. We were gathered that day in Baghdad in defense of the Yezidi religious minority who continues to suffer as 3,300 of their women and children are still held in captivity.

Joseph Smith said in 1843, “I am bold to declare before Heaven that I am just as ready to die in defending the rights of a Presbyterian, a Baptist, or a good man of any denomination . . . who may be unpopular and too weak to defend themselves. It is a love of liberty which inspires my soul — civil and religious liberty to the whole of the human race.”

It’s not enough that we offer humanitarian aid after the violence. What can we do to reduce violence and persecution right where we live? It’s a serious question for me as a Christian and a Latter-day Saint. What do you do personally that protects the faith and belief of others? How do you share your own beliefs and still respect others who may be very different? Father Eubank would be glad to hear.

Feel free to share any response to her question in the comments below.

I was born on Baghdad, and escaped in 1947. I'm not sure what would happen IF I went back. At 82 years, with lots of clinical happenings in my mortal frame, I believe the LORD will get 'first dibs' on me! I have vivid memories of my youth in Baghdad - much of it in my family history. Wow, I was born in Baghdad and literally escaped in 1947. Lots of stuff in my family history. Would love to share. I pray for the Lord's blessings to keep you safe in your travels. Son of Nun: Ibn-al Noon i

I only have one question for you, Sister Eubanks. Do you mind being a woman? As a life long member of the church as a woman, I am very comfortable with Eve's role in the creation. How to protect baby girls, young girls, women, etc. is definitely a human rights issue. All we can do is have good women like yourself represent women in a favorable light, and especially, on the world's stage. We pray for you in your assignments.