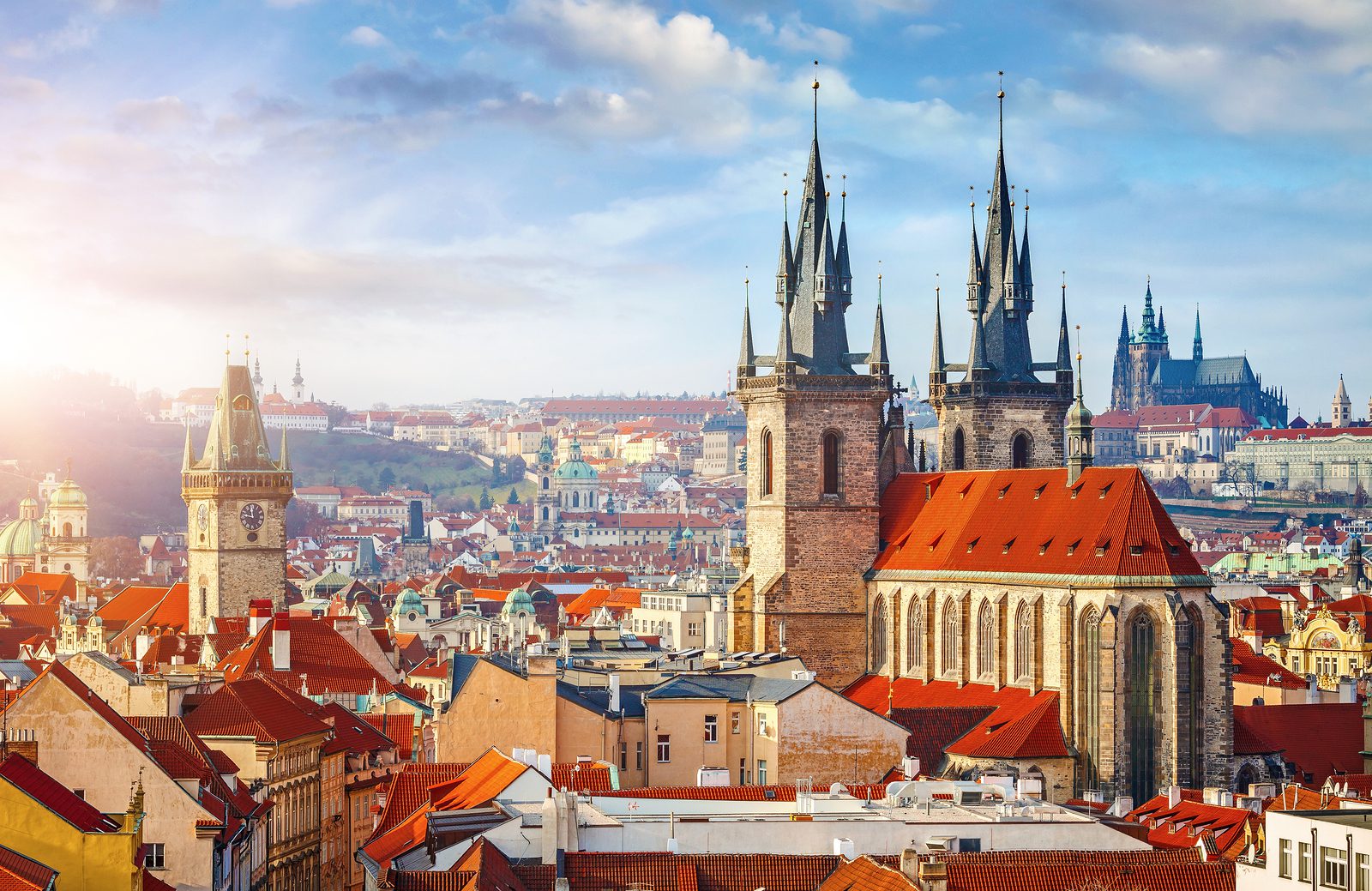 Editors’ Note: Having traveled extensively in Europe and seen the empty churches where only a few people attend service, we were pleased to see from this PEW Research that a higher percentage of people in Europe say religion was very important to them than we had believed. Still the numbers are surprisingly low in parts of Europe for people who see religion as mattering to them.

CLICK HERE to see an interactive map of Europe exploring each nation’s religiosity.

The Iron Curtain that once divided Europe may be long gone, but the continent today is split by stark differences in public attitudes toward religion, minorities and social issues such as gay marriage and legal abortion. Compared with Western Europeans, fewer Central and Eastern Europeans would welcome Muslims or Jews into their families or neighborhoods, extend the right of marriage to gay or lesbian couples or broaden the definition of national identity to include people born outside their country.

These differences emerge from a series of surveys conducted by Pew Research Center between 2015 and 2017 among nearly 56,000 adults (ages 18 and older) in 34 Western, Central and Eastern European countries, and they continue to divide the continent more than a decade after the European Union began to expand well beyond its Western European roots to include, among others, the Central European countries of Poland and Hungary, and the Baltic states of Estonia, Latvia and Lithuania.

The continental divide in attitudes and values can be extreme in some cases. For example, in nearly every Central and Eastern European country polled, fewer than half of adults say they would be willing to accept Muslims into their family; in nearly every Western European country surveyed, more than half say they would accept a Muslim into their family. A similar divide emerges between Central/Eastern Europe and Western Europe with regard to accepting Jews into one’s family. 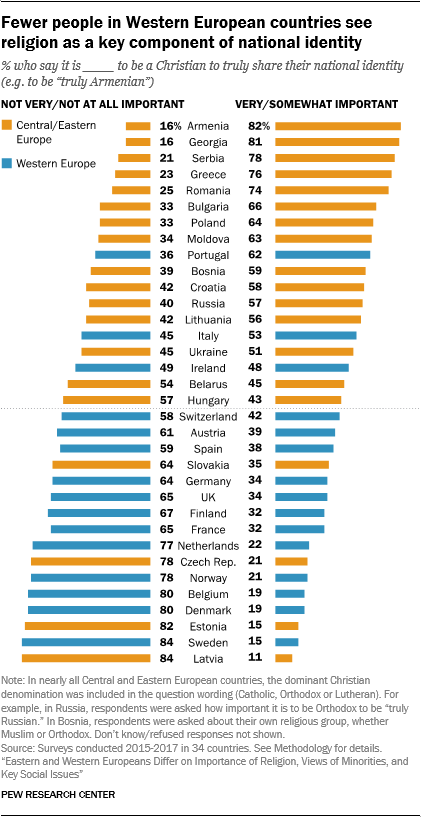 Attitudes toward religious minorities in the region go hand in hand with differing conceptions of national identity. When they were in the Soviet Union’s sphere of influence, many Central and Eastern European countries officially kept religion out of public life. But today, for most people living in the former Eastern bloc, being Christian (whether Catholic or Orthodox) is an important component of their national identity.

In Western Europe, by contrast, most people don’t feel that religion is a major part of their national identity. In France and the United Kingdom, for example, most say it is not important to be Christian to be truly French or truly British.

To be sure, not every country in Europe neatly falls into this pattern. For example, in the Baltic states of Latvia and Estonia, the vast majority of people say being Christian (specifically Lutheran) is not important to their national identity. Still, relatively few express willingness to accept Muslims as family members or neighbors.

But a general East-West pattern is also apparent on at least one other measure of nationalism: cultural chauvinism. The surveys asked respondents across the continent whether they agree with the statement, “Our people are not perfect, but our culture is superior to others.” While there are exceptions, Central and Eastern Europeans overall are more inclined to say their culture is superior. The eight countries where this attitude is most prevalent are all geographically in the East: Greece, Georgia, Armenia, Bulgaria, Russia, Bosnia, Romania and Serbia.

People in Central and Eastern Europe also are more likely than Western Europeans to say being born in their country and having family background there are important to truly share the national identity (e.g., to be truly Romanian; see here.).

Taken together, these and other questions about national identity, religious minorities and cultural superiority would seem to indicate a European divide, with high levels of religious nationalism in the East and more openness toward multiculturalism in the West. Other questions asked on the survey point to a further East-West “values gap” with respect to key social issues, such as same-sex marriage and legal abortion.

To read more of this study from the PEW Research Center, CLICK HERE.

Orthodoxy, Catholicism and Protestantism are each prominent in different parts of Europe

Christianity has long been the prevailing religion in Europe, and it remains the majority religious affiliation in 27 of the 34 countries surveyed. But historical schisms underlie this common religious identity: Each of the three major Christian traditions – Catholicism, Protestantism and Orthodoxy – predominates in a certain part of the continent.

Orthodoxy is the dominant faith in the East, including in Greece, Russia, the former Soviet republics of Moldova, Armenia, Georgia, Ukraine and Belarus, and other former Eastern bloc countries such as Serbia, Romania and Bulgaria. Catholic-majority countries are prevalent in the central and southwestern parts of Europe, cutting a swath from Lithuania through Poland, Slovakia and Hungary, and then extending westward across Croatia, Austria, Italy and France to the Iberian Peninsula. And Protestantism is the dominant Christian tradition in much of Northern Europe, particularly Scandinavia.

There are substantial populations belonging to non-Christian religions – particularly Islam – in many European countries. In Bosnia, roughly half of the population is Muslim, while Russia and Bulgaria have sizable Muslim minority populations. But in most other countries surveyed, Muslims and Jews make up relatively small shares of the population, and surveys often are not able to reliably measure their precise size.

In addition, all the Western European countries surveyed have sizable populations of religiously unaffiliated people – those who identify as atheist, agnostic or “nothing in particular,” collectively sometimes called “nones.” “Nones” make up at least 15% of the population in every Western European country surveyed, and they are particularly numerous in the Netherlands (48%), Norway (43%) and Sweden (42%). On balance, there are smaller shares of “nones” – and larger shares of Christians – in Central and Eastern Europe, though a plurality of Estonians (45%) are unaffiliated, and the Czech Republic is the only country surveyed on the entire continent where “nones” form a majority (72%). 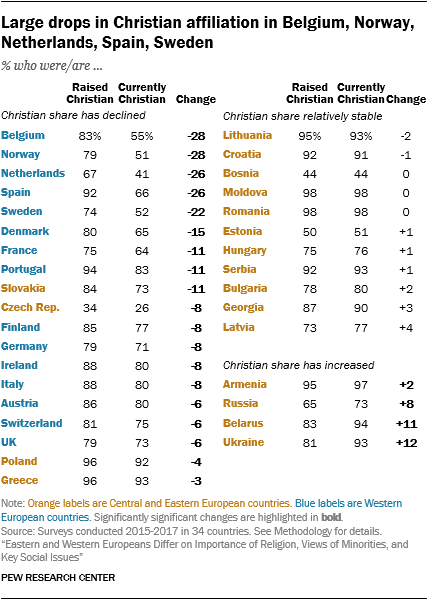 The lower Christian shares in Western Europe reflect how the region’s religious landscape has been changing within the lifetimes of survey respondents.

While large majorities across the continent say they were baptized Christian, and most European countries still have solid Christian majorities, the survey responses indicate a significant decline in Christian affiliation throughout Western Europe. By contrast, this trend has not been seen in Central and Eastern Europe, where Christian shares of the population have mostly been stable or even increasing.

Indeed, in a part of the region where communist regimes once repressed religious worship, Christian affiliation has shown a resurgence in some countries since the fall of the USSR in 1991. In Ukraine, for example, more people say they are Christian now (93%) than say they were raised Christian (81%); the same is true in Russia, Belarus and Armenia. In most other parts of Central and Eastern Europe, Christian shares of the population have been relatively stable by this measure.

What are the reasons for these opposing patterns on different sides of the continent? Some appear to be political: In Russia and Ukraine, the most common explanation given by those who were raised without a religion but are now Orthodox is that religion has become more acceptable in society. Another important reason is a connection with their national heritage.

In Western Europe, there are a variety of reasons why many adults who were raised Christian have become unaffiliated. Most of these adults say they “gradually drifted away from religion,” though many also say they disagreed with church positions on social issues like homosexuality and abortion, and/or that they stopped believing in religious teachings.

To read more of this study from the PEW Research Center, CLICK HERE.