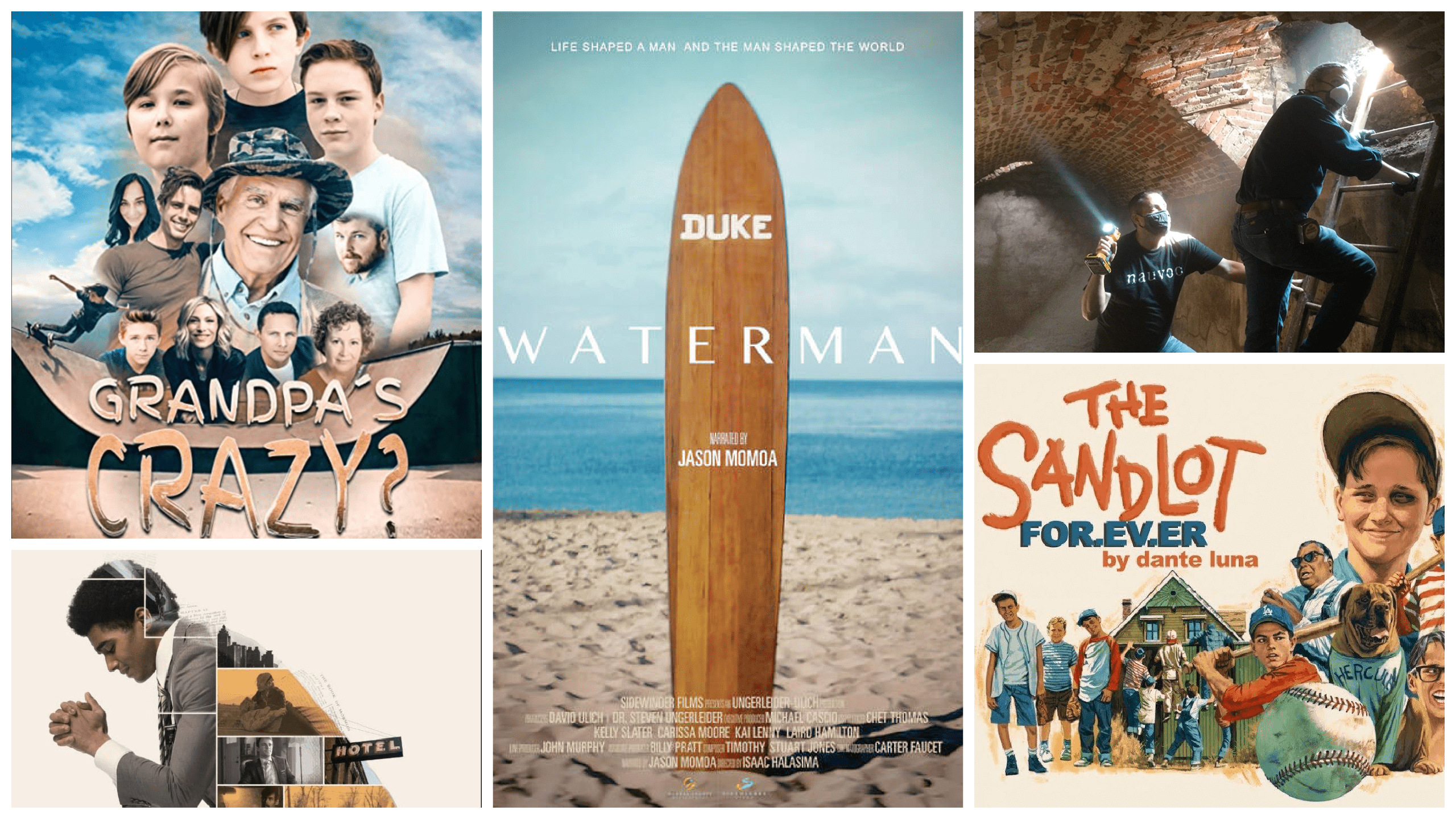 Celebrating twenty-one years of programming in 2022, the LDS Film Festival has promoted cinema as a means of conversation and perspective that often touches the heart and opens the mind. What began as a short film festival, is now a major event showcasing an impressive array of feature films, documentaries, special screenings, short films, music videos, and top-level panels, organizers of the festival are planning a true cinematic experience for all.

The LDS film festival was started in 2001 by Austrian filmmaker Christan Vuissa. The festival’s initial concept was to create a venue and forum to present what LDS filmmaking should be or could be, a few years ago former festival programmer and filmmaker Kels Goodman took over the festival and continued to own and operate through March 2021.

New Festival owners and Co-Directors Marshall Moore and Michelle Moore recently announced the award-winning documentary Waterman from filmmaker Isaac Halasima will be this year’s opening night feature film, the Moore’s also shared that at conclusion of this year’s programming the LDS Film Festival will become Zion Film Festival as part of the new vision going forward.

Waterman explores the life and influence of legendary Hawaiian and Olympian Duke Paoa Kahanamoku and Duke’s legacy as a legendary swimmer, trailblazer, and the undisputed father of modern-day surfing. Through Duke’s incredible athletic accomplishments, his personification of the spirit of Aloha, and enduring gift to the world of surfing, the film explores a theme that still resonates today – the role of sports in breaking societal barriers – and celebrates his triumphs and philosophy of inclusion, challenging us all to embrace diversity and incorporate the spirit of Aloha into our own lives.

Waterman also features the extremely talented A-list actor and native Hawaiian Jason Momoa (Aquaman, Dune) as its narrator.  “Jason has an incredible affinity, love and respect for Duke,” said Halasima. “He’s a waterman himself and brought that passion to the project.”

“This year’s LDS Film Festival will give just a taste of what’s in store for future festivals,” said Marshall Moore, co-owner and co-director of the soon to be named Zion Film Festival. “We are confident longtime and first-time attendees will be surprised and delighted with this year’s programming and that it will set the stage for the Zion Film Festival to continue to grow in size and influence for many years to come.”

From the filmmakers that won Best Feature Film last year with their movie WITNESSES come a new documentary playing at the festival this year titled, “Undaunted: Witnesses of the Book of Mormon” which includes dramatized moments from early LDS Church History and interviews with church scholars and historians.

Also showing will be the feature film “Grandpa’s Crazy” produced by Dave Bresnahan and Directed by Danor Gerald making his directorial debut after starring in many films and tv shows in front of the camera. “Sandlot Forever” chronicles the many events associated with the 25th Anniversary of The Sandlot in 2018 culminating with a screening and cast appearance on the field where it was filmed in 1992.

“Redeemed: The Sione Havili Story” produced by KSL and Angie Dennison and hosted by Vai Sikahema will also make its debut in the Documentary Short Category.

Another film that is worthy of mention “Lucy and Whitney” was Written and Directed by BYU Film Graduate Parker Gehring and shot in his hometown of Steilacoom, Washington.

A full slate of films that will be playing at the festival can be found online at https://www.ldsfilmfest.com/2022-festival-schedule

“The Moores bring a tremendous amount of experience and will be a talented team to enhance and grow the mission of the festival,” Goodman said. The change of ownership will give Goodman more time to write and direct new films that he hopes to submit to the festival in the future.

Marshall Moore is the former Director of the Utah Film Commission, long time film crew member, and currently serves as the VP of Operations and Marketing at Utah Film Studios in Park City, Utah. Michelle has worked as a film publicist for almost a decade and has strong relationships with filmmakers, actors, distributors, and the media.

I have been part of the Utah film community since I came here in 1992 to begin working on the ABC Mini-Series ‘The Stand,’ film is really the only thing I know well.  I love the people, I love the history, and I just love film and feel it is worth the investment of time and resources to grow and build something that has a great foundation already in place,” shared Marshall.

Michelle adds, “I’ve had the opportunity to work with so many filmmakers and actors for ten years now. There’s a common thread of acceptance and support on any size project I’ve worked on, or film sets we’ve visited. Utah has a rich and important history of filmmaking, both in production and education. We felt that we could use our skills in growing and promoting the LDS Film Festival to showcase the talented filmmakers and actors that work and give so much so we can be entertained and inspired.”

“This is a festival that all can enjoy, young and old,” says Marshall, “I feel that there is much still to come. We are at the precipice of great things that will expand the reach and inclusion from many different filmmakers throughout the world.”

United with the same commitment, Michelle adds, “I think what interested me the most is we wanted to be a major contributor in connecting filmmakers with audiences. What I find special as I dive into this genre is the amount of teamwork that goes into producing. Twenty years ago, there might be a background actor that now plays a leading role or a PA that is now directing or producing their own material. Unity. Support. Family. Growth. That’s what I see in filmmaking.”

Michelle continues “It is humbling and exciting to be in this role at this specific moment. We are committed to growing the film festival that Christian Vuissa started 20 years ago. We will carry on the sense of community and film unity that Kels and Stephanie Goodman created as owners. Now, as we begin a new era of ownership, we will embrace the foundation of the past and build upon the legacy as we look to the future,”

Co-director Marshall Moore says, “Michelle and I are committed and fully invested in continuing the mission that has already been put in motion. We have assembled a Board of Directors that will assist us in growing the festival and community support by providing a platform for filmmakers to showcase their work to audiences and connect with others in the film industry that produce encouraging and inspirational content.”

It’s obvious the Moore’s focus is growing the festival and providing a platform for storytelling. They see films as essential conversation starters and encourage filmmakers to bring their work to the festival. Movies that entertain and uplift, provide a rich diversity of voices, and a festival that connects filmmakers with audiences is a great place to start these conversations.

“Filmmaking is always about story and storytelling,” said Marshall Moore. “Our hope is to attract a wide and diverse group of films and filmmakers from all backgrounds and faiths.”

The festival runs March 2nd – 5th at the Scera Center for the Arts. More information and tickets can be found at ldsfilmfest.com.