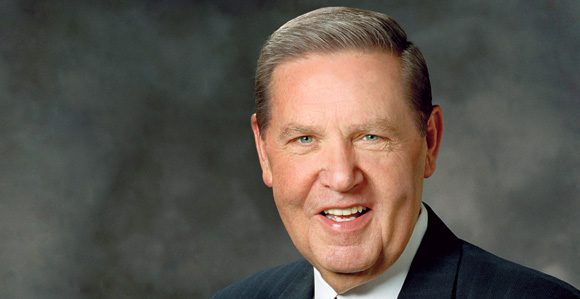 Hugh Hewitt: Elder Jeffrey R. Holland is a member of the Quorum of the Twelve of the Church of Jesus Christ of Latter Day Saints, and a past president of BYU as well as PhD from Yale and an articulate defender of religious freedom around the globe.  He joined me in my California studios Friday:

[Here are a few notable quotes from the interview]

JH: …my interfaith message was nothing could combine us better, nothing calls for our service more, there’s almost nothing on which we could stand shoulder to shoulder given circumstances of today than this matter of religious freedom and the chance for every man or woman of whatever religious conviction to have the freedom to say what they want to say and believe what they want to believe. And much of that is under threat in this nation and around the globe.

HH: And it just seems to me, though…that the group of people who are rallying around religious freedom is growing, but not fast enough.

JH: It’s not fast enough, but I think it’s more articulate, Hugh. I think it’s more focused. I think there is more interfaith, if you broadly define a phrase like interfaith, I think it’s not growing fast enough, and who knows the ultimate growth, but I do believe there’s more interest, there is more shared participation, very bright people, very articulate people, I think, are talking more and more about this and saying it does matter, and it needs to matter to more of us.

HH: When we went to break, you referenced an incident in Houston. Right now, I’m helping Alliance Defending Freedom raise money to defend the Atlanta fire chief who was fired because he circulated his own Bible study.

HH: And then you mentioned Houston.

HH: …where the mayor went after every pastor in the city that disagreed with her, and in both of those, I think, we’ll win. But we shouldn’t have to fight these battles.

JH: No, no, that is unprecedented in American history. That is absolutely, it may be unprecedented in Western civilization. I don’t want to be overly dramatic about it, but I think those are warning signs. And it is then legitimate to be talking about the future of religious freedom in this country. We should be talking about it for the whole globe. But I think we have to take seriously what those portend, and to be aggressive, appropriately aggressive, on the front of that to make sure that that first right granted, the first human right in this nation, was its religious freedom. That is the first element of the Bill of Rights, and as you know, you’re the legal scholar, but I think we can’t assume that some other right, or some other civil privilege is going to trump something as fundamental as free expression.

HH: What are you telling your young people?