Hope from ashes: Why the Notre Dame fire is a symbol of rebirth during Holy Week | Meridian Magazine 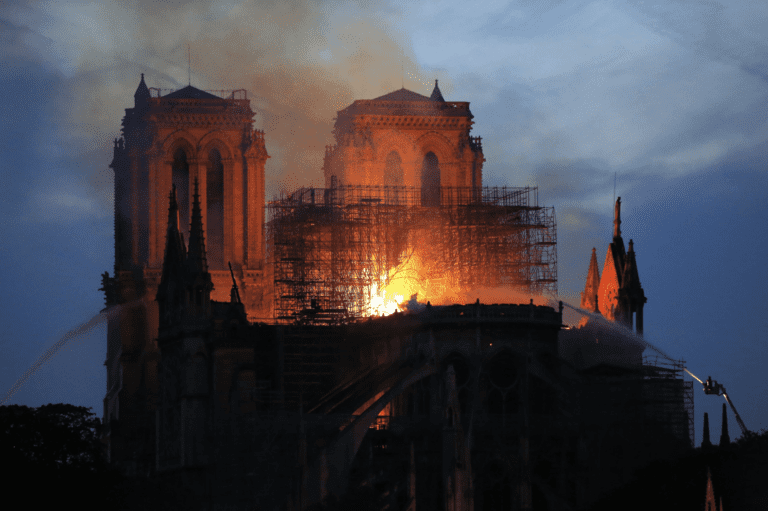 Hope from ashes: Why the Notre Dame fire is a symbol of rebirth during Holy Week

Editor’s Note: In the midst of reports from around the world about the devastating fire that wreaked havoc on the beloved cathedral of Notre Dame in Paris on Monday, hope is beginning to return as the fire is finally being contained and so much was able to be saved.

Scroll to the bottom to see some of the first photos of the interior, which appears to be miraculously intact after the fire.

According to a report from CNN, “French billionaire François Pinault has already pledged €100 million ($113 million) to the reconstruction of the fire-ravaged cathedral.”

Together with the Eiffel Tower, Notre Dame is one of the two great symbols of Paris, said Presiding Bishop Gérald Caussé.

“It is an iconic edifice that testifies to the extraordinary faith and dedication of those who built it,” said Bishop Caussé, who was born in Bordeaux, France. “It has been at the heart of the French history and culture for eight centuries, and all French people embrace it as their own whatever their religious beliefs.”

The cathedral, which has a history of more than 850 years, is perhaps one of the most important historical monuments for all of France, said Father Brien McCarthy, a Catholic priest who presides over L’egliese de la Madeleine, which stands several blocks northwest of the Ile de la Cite.

With around 14 million tourists frequenting the cathedral each year, Father McCarthy described how he loves witnessing a change in people who visit it, even if they aren’t religious.

“There is something about the brick and mortar stones, placed there by believing people, that can communicate to people. They know they are on holy ground, and it’s not because the place is holy, but because it is made holy by the faith of the people there,” he said.

The fire, which is believed to have been caused by ongoing constructionto restore parts of the cathedral’s roof, began shortly before 7 p.m. on Monday, April 15, in Paris. It was a sad and unfortunate event, said Father McCarthy, adding that if it had to happen, he couldn’t imagine it happening at a better time.

“If there is a moment when Christians should be ready to mourn the death of something, but to believe in the resurrection of something, it’s Holy Week,” Father McCarthy said.

“It is my belief that something is going to rise from these ashes,” he said.

Below are some of the first photographs of the interior after the blaze: