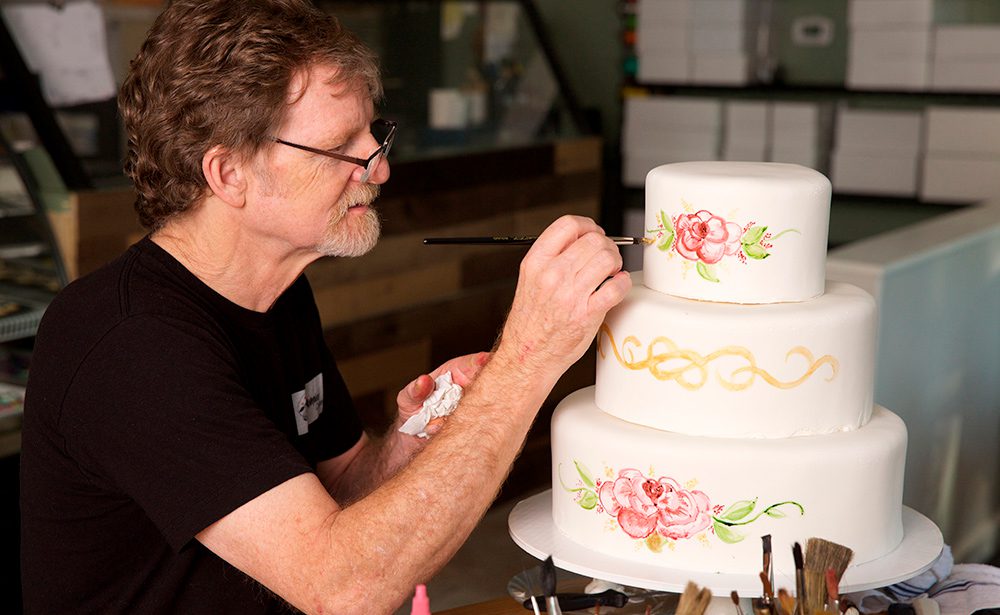 The following comes from the Alliance Defending Freedom.
Alliance Defending Freedom attorneys representing Masterpiece Cakeshop and its owner, Jack Phillips, filed a motion in federal court Tuesday to stop Colorado officials from violating his constitutional rights while Phillips’ lawsuit against them proceeds. Although the U.S. Supreme Court ruled in June that Colorado cannot treat Phillips differently than other cake artists who decline custom projects based on the messages they convey, the state has continued to apply a double standard and demonstrate hostility toward him and his beliefs.

On June 26, 2017, the same day that the Supreme Court agreed to take up Masterpiece Cakeshop v. Colorado Civil Rights Commission, an attorney asked Masterpiece Cakeshop to create a cake designed pink on the inside and blue on the outside, a design that the attorney said would reflect and celebrate a transition from male to female. That same attorney later requested that Phillips create a cake celebrating Satan. Phillips’ shop declined the requests because those custom cake designs would have expressed messages that contradict his religious beliefs. After the attorney complained about Phillips’ decision not to create the gender-transition cake, the Colorado Civil Rights Commission, the same state agency that lost its case against Phillips at the Supreme Court in June, filed a formal complaint against him earlier this month.

“The same agency that the Supreme Court just said is hostile to Jack Phillips remains committed to treating him unequally and forcing him to express messages that violate his religious beliefs,” said ADF Senior Vice President of U.S. Legal Division Kristen Waggoner, who argued on behalf of Phillips before the Supreme Court in his first case. “Jack serves all customers, and he is happy to serve the attorney who lodged the complaint against him. But Jack doesn’t create custom cakes that express messages or celebrate events that contradict his deeply held beliefs. Apparently, that isn’t enough for the commission. It insists on forcing Jack to celebrate ideas and events that violate his faith.”

“Even though the state is refusing to respond to public-records requests and fighting to keep us from obtaining basic information about the commission, we have already discovered that a current commissioner has publicly referred to Jack as the ‘cake hater,’” added ADF Senior Counsel Jim Campbell, who along with Waggoner is representing Phillips in his recently filed federal lawsuit, Masterpiece Cakeshop v. Elenis. “Jack has no chance of obtaining justice before people who say such things. That’s why we’re asking the federal court to put an end to the state’s efforts to punish him.”

Colorado officials recently filed a motion to dismiss Phillips’ lawsuit, Masterpiece Cakeshop v. Elenis. ADF responded by filing a motion for a preliminary injunction. In the brief supporting that motion, ADF argues that “Colorado has done nothing to disavow or correct the Commission’s systemic and deep-seated opposition toward Phillips and his faith. Without Phillips having the chance to conduct discovery or obtain public records, evidence already confirms that it remains.” Not only does the commission continue to treat Phillips worse than other cake artists who are allowed to decline request for custom cakes with messages that they consider objectionable, but also one of the current commissioners has referred to Phillips as the “cake hater” on Twitter.

In light of the commission’s continued bias against Phillips and his religious beliefs, the ADF brief argues that the state is violating his due-process rights, and that he cannot be guaranteed a fair hearing by the commission. The brief also notes that the commission’s adjudicative process is flawed because the same commissioners act as both accusers and adjudicators in the same case, an arrangement that the Supreme Court condemned in a 2016 decision.

Over his years as a cake artist, Phillips has declined to create cakes with diverse messages that violate his faith, including messages that demean LGBT people, express racism, celebrate Halloween, promote marijuana use, and celebrate or support Satan.

Alliance Defending Freedom is an alliance-building, non-profit legal organization that advocates for the right of people to freely live out their faith.
1 Comment | Post or read comments

Thank you for sharing this. My prayers are with Mr. Phillips. His cause is just!!