General Conference by the Numbers: Preparation for the Second Coming | Meridian Magazine 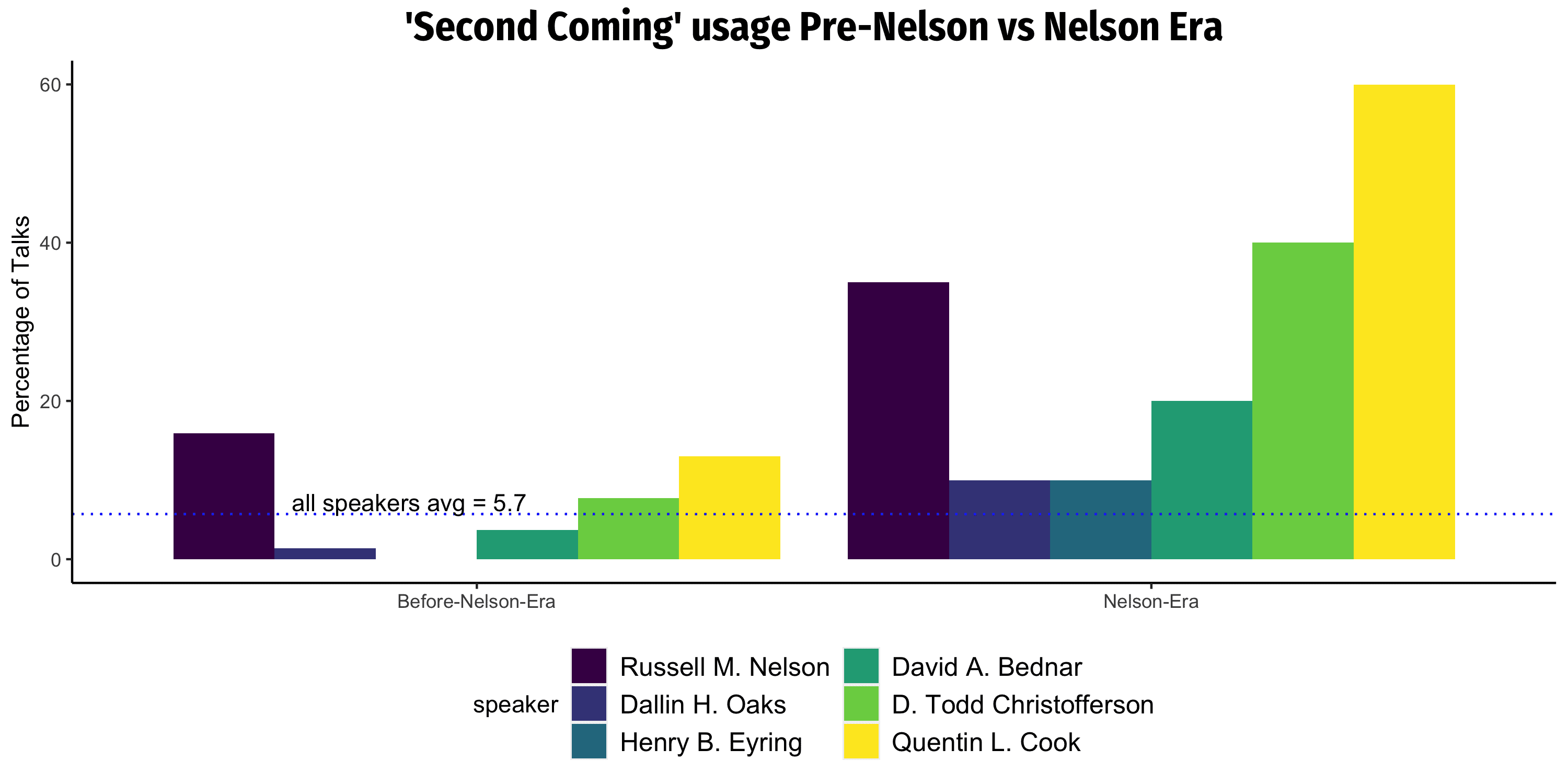 General Conference by the Numbers: Preparation for the Second Coming

Preparing the church for the Second Coming of the Savior is an unmistakable priority of President Nelson.  When President Nelson speaks, we feel his love and concern for each member of the church.  But if we listen carefully, we can also hear a quiet urgency that time is short and there is much to do.  Left unsaid is the Savior’s refrain: “Who hath ears to hear, let him hear.”

During the past year, as I have studied recent General Conference data, it has become clear that President Nelson is urging all of us to focus our effort on preparation for the Second Coming.  The following chart shows how frequently the Second Coming has been mentioned in recent conference talks:

In April 2020, while announcing the latest Proclamation to the World, President Nelson said this:

Now as we contemplate this significant time in the history of the world and the Lord’s charge to gather scattered Israel in preparation for the Second Coming of Jesus Christ, we, the First Presidency and Council of the Twelve Apostles, issue the following proclamation. Its title is “The Restoration of the Fulness of the Gospel of Jesus Christ: A Bicentennial Proclamation to the World.”  Hear Him – April 2020

At the Worldwide Youth Devotional in June 2018, he made this statement:

Just think of the excitement and urgency of it all: every prophet commencing with Adam has seen our day. And every prophet has talked about our day, when Israel would be gathered and the world would be prepared for the Second Coming of the Savior. Think of it! Of all the people who have ever lived on planet earth, we are the ones who get to participate in this final, great gathering event. How exciting is that!   Hope of Israel – 2018

President Nelson’s emphasis on the Second Coming has also had an influence on other general authorities:

The above chart documents a dramatic increase in usage of the phrase ‘Second Coming’ in talks given during the Nelson era.  Clearly, President Nelson’s urgent enthusiasm for this topic has inspired several senior apostles to contemplate the Second Coming.

In his talk, Preparing for the Lord’s Return – April 2019, Elder Christofferson said:

… the Spirit made clear to me that The Church of Jesus Christ of Latter-day Saints is uniquely empowered and commissioned to accomplish the necessary preparations for the Lord’s Second Coming; indeed, it was restored for that purpose.

Elder Cook, in his talk, Great Love for Our Father’s Children – April 2019, said:

My dear brothers and sisters, this is a unique and pivotal time in history. We are blessed to live in the last dispensation before the Second Coming of the Savior. Near the commencement of this dispensation, in 1829, the year before the Church was formally organized, a beloved revelation was received, declaring that “a marvelous work” was “about to come forth.” This revelation established that those who desired to serve God qualify for such service through “faith, hope, charity and love, with an eye single to the glory of God.” Charity, which is “the pure love of Christ,” includes God’s eternal love for all His children.

The following chart compares the emphasis placed on the gathering of Israel in each of the recent eras:

In October 2006, President Nelson gave an important talk on this subject titled: The Gathering of Scattered Israel.  In that talk, he said:

We share an enormous responsibility to be who the Lord wants us to be and to do what He wants us to do. We are part of a great movement—the gathering of scattered Israel. I speak of this doctrine today because of its unique importance in God’s eternal plan…

This doctrine of the gathering is one of the important teachings of The Church of Jesus Christ of Latter-day Saints. The Lord has declared: “I give unto you a sign … that I shall gather in, from their long dispersion, my people, O house of Israel, and shall establish again among them my Zion.” (3 Nephi 21:1) The coming forth of the Book of Mormon is a sign to the entire world that the Lord has commenced to gather Israel and fulfill covenants He made to Abraham, Isaac, and Jacob.  We not only teach this doctrine, but we participate in it. We do so as we help to gather the elect of the Lord on both sides of the veil.

In his Oct 2018 talk, Sisters Participation in the Gathering of Israel, President Nelson said:

You remember that last June, Sister Nelson and I spoke to the youth of the Church. We invited them to enlist in the Lord’s youth battalion to help gather Israel on both sides of the veil. This gathering is “the greatest challenge, the greatest cause, and the greatest work on earth today”!

Other senior apostles are following President Nelson’s lead on this topic as well, as shown below:

In his talk, The Role of the Book of Mormon in Conversion – Oct 2018, Elder Shayne M. Bowen said:

In April 2019, Elder Quentin L. Cook explained the importance of loving our fellowman in the gathering of Israel:

When it comes to gathering Israel, we need to align our hearts with this kind of love and move away from feelings of mere responsibility or guilt to feelings of love and participation in the divine partnership of sharing the Savior’s message, ministry, and mission with the world.

Sister Bonnie H. Cordon – April 2020 talked about the importance of being a good example:

My dear friends, why is shining our light so important? The Lord has told us that “there are many yet on the earth … who are only kept from the truth because they know not where to find it.”  We can help. We can intentionally shine our light so others may see. We can extend an invitation.  We can walk the journey with those who are taking a step toward the Savior, no matter how halting. We can gather Israel.

Preparation for the Second Coming

The scriptures tell us that prior to the Second Coming that “… the whole earth shall be in commotion …” (D&C 45:26).  Further, “And then shall many be offended, and shall betray one another, and shall hate one another” (Matt. 24:10).   The past several months have brought these and other prophesies into clear focus.

With scriptural prophesies being fulfilled and with the urgency that President Nelson is expressing regarding the Second Coming, it seems clear that we all need to make our own preparations a high priority in our lives.  The Parable of the Ten Virgins applies to us right now.  Now is the time for us to fill our lamps and to make sure that we are counted among the wise virgins when He comes.

Questions and comments are welcome at: [email protected]

Spot on! Great read!!! Thanks for the detailed analysis. I did not realize the increase that exists. It confirms my enthusiasm and excitement to hear what our leaders have to inspire us with this coming weekend.