General Conference by the Numbers: The Most Discussed Topics of April Conference « Meridian Magazine 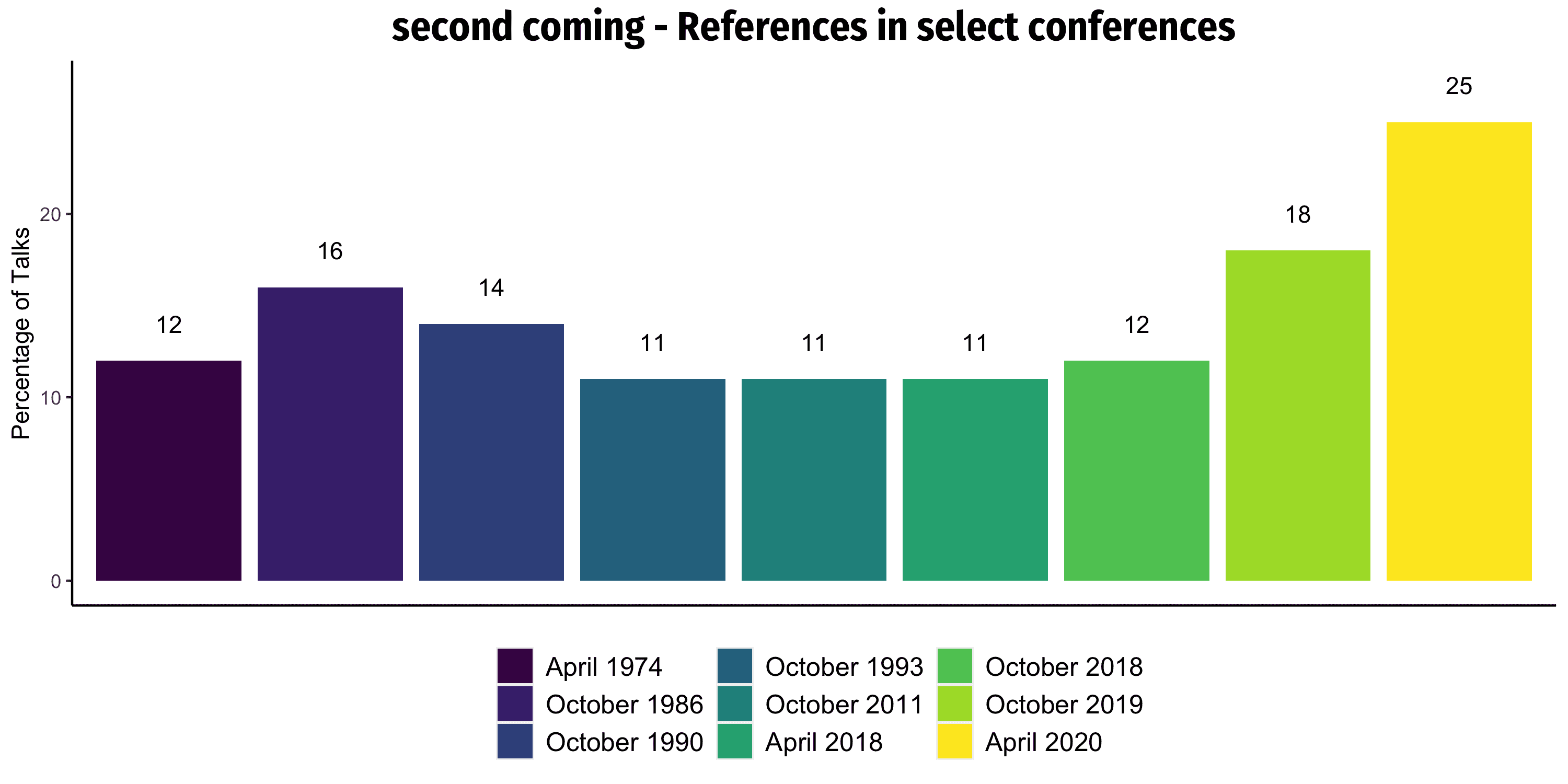 General Conference by the Numbers: The Most Discussed Topics of April Conference

The April 2020 general conference will be remembered as a spiritual outpouring commemorating the bicentennial of the First Vision which included the sixth proclamation issued by the church: The Restoration of the Fulness of the Gospel of Jesus Christ: A Bicentennial Proclamation to the World.

On top of that, every member of the church had an opportunity to participate in a world-wide Hosanna Shout.  The conference provided a much-needed spiritual boost during the COVID-19 pandemic.  Future history buffs will remember the conference for its “social distancing” format where the talks were given in an empty auditorium and speakers sat in chairs six feet apart.  This article will explore some of the themes that can be identified by examining data from the conference.

With its focus on the Restoration, increased emphasis on Joseph Smith, the First Vision and the Book or Mormon during the April 2020 conference is not a surprise.  Let’s take a look at each of these topics and see how usage in this conference compares with past conferences.

Note that Joseph Smith was mentioned in 84% of the talks in the October 2005 conference – the most of any conference.

Measured by the number of references to the phrase “Book of Mormon” in conference talks, the Book of Mormon is being emphasized more during the Russell M. Nelson era than ever before with over 50% of talks referring to it by name:

In his talk, The Power of the Book of Mormon in Conversion, Elder Benjamin M. Z. Tai

emphasized the importance of the Book of Mormon in overcoming temptation:

President Russell M. Nelson has promised: “As you prayerfully study the Book of Mormon every day, you will make better decisions—every day. I promise that as you ponder what you study, the windows of heaven will open, and you will receive answers to your own questions and direction for your own life. I promise that as you daily immerse yourself in the Book of Mormon, you can be immunized against the evils of the day, even the gripping plague of pornography and other mind-numbing addictions.”

Dear friends, the Book of Mormon is the word of God, and we will draw nearer to Him if we study it.  As we experiment upon its words, we will obtain a witness of its truthfulness.  As we consistently live according to its teachings, we will have “no more desire to do evil.” Our heart, countenance, and nature will be transformed to become more like the Savior.

In his talk, Shall We Not Go On in So Great a Cause?, President M. Russell Ballard commemorated the First Vision by reminding us of the debt we owe to those who sacrificed so much to restore the gospel.

As we celebrate this joyous occasion, the 200th anniversary of the First Vision, we should always remember the price Joseph and Hyrum Smith paid, along with so many other faithful men, women, and children, to establish the Church so you and I could enjoy the many blessings and all of these revealed truths we have today. Their faithfulness should never be forgotten!

I have often wondered why Joseph and Hyrum and their families had to suffer so much. It may be that they came to know God through their suffering in ways that could not have happened without it. Through it, they reflected on Gethsemane and the cross of the Savior. As Paul said, “For unto you it is given in the behalf of Christ, not only to believe on him, but also to suffer for his sake.”

In his talk, The Coming Forth of the Book of Mormon, Elder Ulisses Soares included numerous references to Joseph Smith History including Oliver Cowdry’s inspiring thoughts from the footnotes of JS-H 1:71:

Joseph’s scribes testified of the power of God that was manifested while working on the translation of the Book of Mormon. Oliver Cowdery once said: “These were days never to be forgotten—to sit under the sound of a voice dictated by the inspiration of heaven, awakened the utmost gratitude of this bosom! Day after day I continued, uninterrupted, to write from his mouth, as he translated … ‘The Book of Mormon.’”

In his talk, Hear Him, President Nelson made a passionate plea for everyone to turn to the Savior.  He started by reminding us of what it means to live in the Dispensation of the Fullness of Times:

We live in the day that “our forefathers have awaited with anxious expectation.” We have front-row seats to witness live what the prophet Nephi saw only in vision, that “the power of the Lamb of God” would descend “upon the covenant people of the Lord, who were scattered upon all the face of the earth; and they were armed with righteousness and with the power of God in great glory.”

You, my brothers and sisters, are among those men, women, and children whom Nephi saw. Think of that!

Then he explained what it means to “Hear Him”:

The very first word in the Doctrine and Covenants is hearken.  It means “to listen with the intent to obey.”  To hearken means to “hear Him”—to hear what the Savior says and then to heed His counsel. In those two words— “Hear Him” —God gives us the pattern for success, happiness, and joy in this life. We are to hear the words of the Lord, hearken to them, and heed what He has told us!

To reinforce this important message, President Nelson introduced the #HearHim hashtag and the HearHim.org website.

In the last issue of General Conference by the Numbers, we looked at covenants, covenant path and the second coming and wondered whether the trends would continue.

Questions and comments are welcome at: mailto:[email protected]

For the record, I love when we receive these numbers from you!