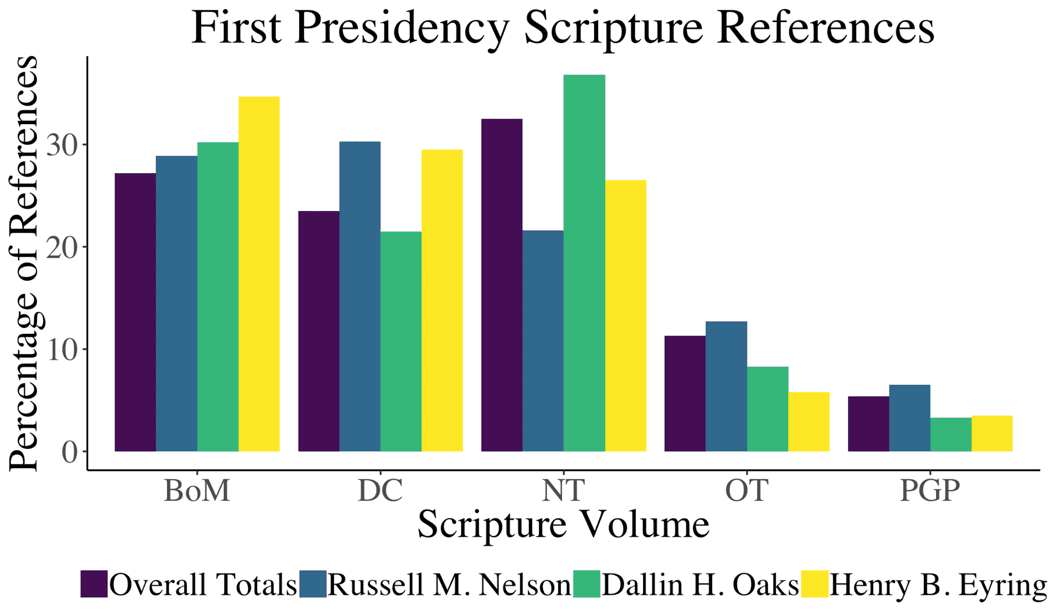 In preparation for the October 2019 General Conference here is a look back at the statistics for April 2019:

Here is an update for some statistics presented before the April 2019 conference:

The same type of histogram can be used to observe individual differences in the scripture references of speakers.  Here is a histogram for members of the First Presidency for all conference talks they have given:

It is also interesting to look at a similar histogram for the Quorum of the Twelve:

Alma 30 is the story of Korihor, the antichrist.  In his talk Hearing His Voice, David P. Homer references 25 verses of Alma 30.  Neil A. Andersen also references Alma 30 in his talk The Eye of Faith.  Both speakers emphasized the importance of listening to and being guided by the Holy Ghost and used Korihor as an example of someone who became misguided by ignoring the promptings of the Spirit.

The following table shows the speakers who have referenced Alma 30 most frequently in their talks:

Alma 30 was referred to more in the April 2019 conference than in any other conference.  The emphasis on the story of Korihor is an important reminder for us.  We need to gird ourselves against what Neal Maxwell refers to as the Korihor conclusions, which are: God never was nor ever will be; there is no redeeming Christ; man cannot know the future; man cannot know of that which he cannot see; whatsoever a man does is no crime; death is the end.

As the world increasingly embraces these conclusions, we must be prepared to protect ourselves and our families from popular viewpoints that are spiritually destructive.  We are being prepared to withstand a coming storm.

Doctrine and Covenants 76 was the second most referenced chapter in April 2019.  Overall, Section 76 has been referenced 744 times by 76 speakers in 217 talks. Here are the 10 talks that reference Section 76 most frequently:

President Nelson’s talk “Come Follow Me” is fourth on this list.  In the talk, he laments that many people ignore the Savior’s offer of exaltation.

The Savior invites all to follow Him into the waters of baptism and, in time, to make additional covenants with God in the temple and receive and be faithful to those further essential ordinances. All these are required if we want to be exalted with our families and with God forever.  The anguish of my heart is that many people whom I love, whom I admire, and whom I respect decline His invitation.

President Nelson references Section 76:50-70 to further amplify this point and to remind us of requirements and blessings of exaltation.

The following table shows the speakers who have referenced Doctrine and Covenants 76 most frequently in their talks:

President Nelson has referenced Doctrine and Covenants 76 more than any other speaker by a wide margin. Three of President Nelson’s talks are in the list of the top 10 talks above.  Also, of note, 5 of the 10 speakers on this list were presidents of the church and 7 of 10 were/are in the First Presidency.

Wherefore, ye must press forward with a steadfastness in Christ, having a perfect brightness of hope, and a love of God and of all men. Wherefore, if ye shall press forward, feasting upon the word of Christ, and endure to the end, behold, thus saith the Father: Ye shall have eternal life.

This verse was referenced by Takashi Wada, Dallin Oaks and Quentin Cook in their talks.  Elder Wada’s talk, Feasting on the Words of Christ, in particular is focused on this verse and is a wonderful supplement to anyone seeking a deeper understanding.  Elder Wada teaches:

The words of Christ will profoundly touch hearts and open the eyes of those who do not yet see Him. On the road to Emmaus, two disciples walked with Jesus. They were sad and did not comprehend that the Savior had triumphed over death. In their grief, they did not recognize that the living Christ was walking with them. Though Jesus “expounded unto them in all the scriptures the things concerning himself,” they still did not recognize Him as the resurrected Savior until they sat and broke bread with Him. Then did their “eyes” open. As we—or our friends, associates, and neighbors—feast and break bread with Him, our eyes of understanding will open. When the disciples at Emmaus reflected on their time with the resurrected Savior, they said that their hearts burned within them while He opened the scriptures to them. This will be true for all of us.

William Durham - thanks for your comment. I agree that we can learn a lot by paying attention to the scriptures referenced in General Conference.

Stunning. I love Statistics, and this is amazing, how they have all been taking and used, and how important the impact of The Scriptures has on the First Presidency, of our Church, and the fact the Scriptures, have a major part in our life's as Church members. Reading, praying, pondering, and studying the Scriptures of The Church of Jesus Christ of Latter- Day Saints, will make us become better people, only if we learn from the Scriptures, and our Church leaders who are the perfect example, to teach us, how to lead a Christ centred life. Stunning article.