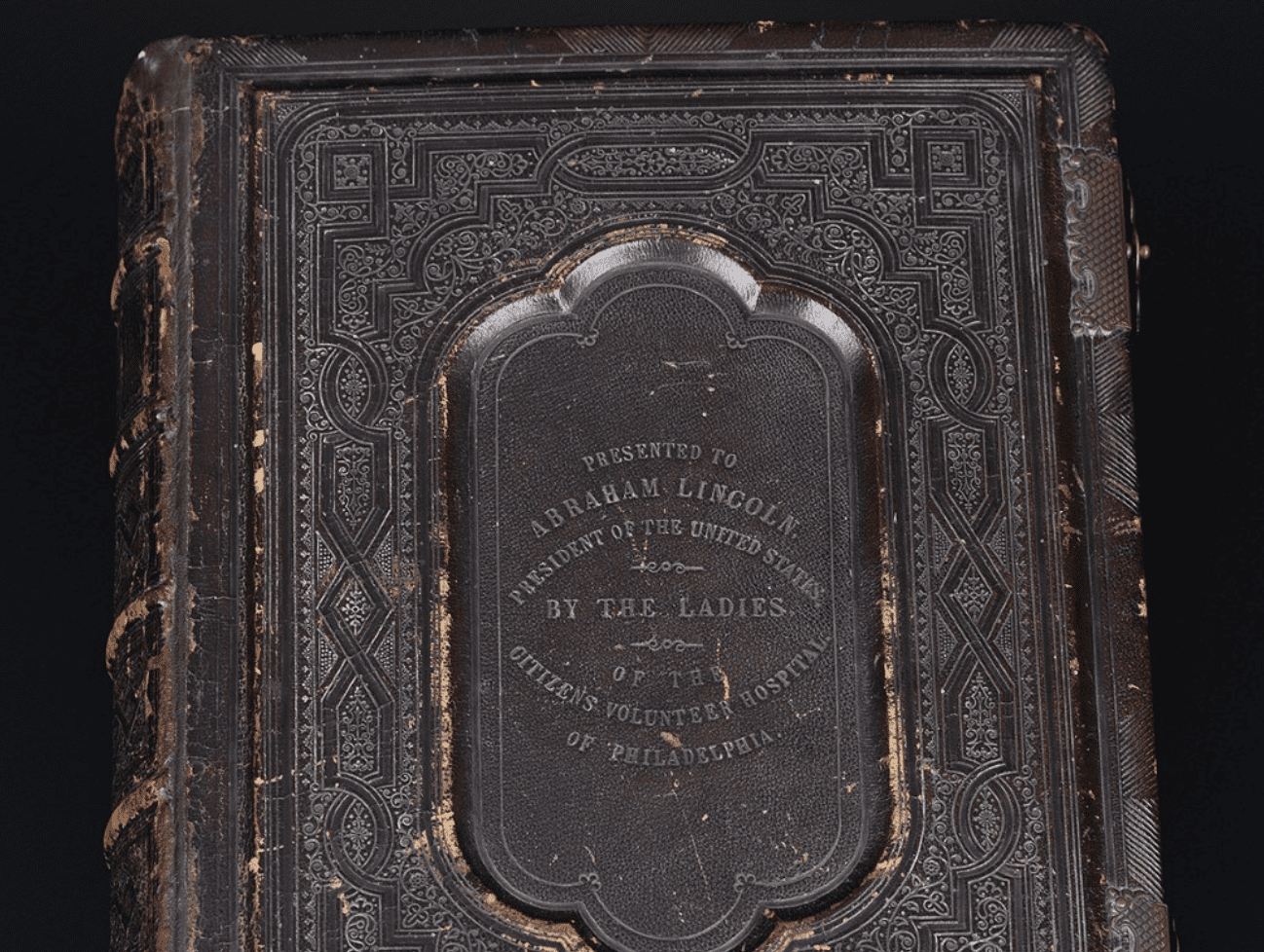 A unique Bible that belonged to Abraham Lincoln in his final year of life, a period when he was growing more overtly religious, has been obtained by the Abraham Lincoln Presidential Library and Museum.

Mary Lincoln gave the Bible to family friend Noyes W. Miner in 1872. Miner, a Baptist minister who had lived across the street from the Lincolns in Springfield for several years, was “a friend very much beloved by my husband,” Mrs. Lincoln wrote.

Miner and his descendants kept the Bible safe for nearly 150 years. Now they have donated it to the Abraham Lincoln Presidential Library and Museum to ensure it is preserved for generations to come.

“We feel that Lincoln’s Bible belongs to the American people as a national treasure. Lincoln is our most revered president and this Bible will be a constant connection to his incredible life,” said Sandra Wolcott Willingham, the great-great-granddaughter of Noyes Miner.

Alan Lowe, executive director of the Abraham Lincoln Presidential Library and Museum, thanked the family on behalf of Lincoln fans and scholars everywhere.

“President Lincoln once called the Bible ‘the best gift God has given to man.’ Now Rev. Miner’s family has made a gift of Lincoln’s own Bible so that it can be shared with everyone,” Lowe said.

The Bible will be exhibited in the museum’s Treasures Gallery for the rest of 2019.

An inscription on the front of the Bible says it was given to Lincoln by “the Ladies of the Citizens Volunteer Hospital of Philadelphia.” It was probably presented on June 16, 1864, when Lincoln visited Philadelphia for a “sanitary fair” to raise money for medical care of Union soldiers. He contributed signed copies of the Emancipation Proclamation to the fundraising effort.

Lincoln frequently visited Miner’s home when they were neighbors. Miner was among the VIPs who escorted Lincoln’s body from Chicago to Springfield. He also spoke at Lincoln’s funeral, reading from the Book of Job.

Miner kept in touch with Mary Lincoln after the president’s death and supported her efforts to obtain a federal pension. She rewarded his years of friendship with the very personal gift of Lincoln’s Bible engraved with her name.

Miner’s family has had the Bible ever since.

“Some of my fondest memories of childhood were visiting my grandparents, Dr. and Mrs. Miner C. Hill of Oyster Bay, NY, and entering the living room where they proudly displayed Lincoln’s Bible and other family treasures,” Willingham said.

The Bible went to their daughter, Carol Hill Lamb, and then in 1994 it was inherited by Lamb’s grandson (Willingham’s son), William Prescott Wolcott of San Francisco. He is the one formally donating the Bible to the Abraham Lincoln Presidential Library and Museum.

Lincoln knew the Bible well and frequently quoted it. Its themes and language helped shape his most famous speeches. His religious views, however, are a matter of significant debate. Lincoln never joined a church. In 1846, he denied being an enemy of religion and of Christians but did not specifically say he was a believer. Some of his friends later described him as an atheist.

But others, including his wife, said he did believe in God. He often attended church in Washington. He mentioned God in speeches and letters – writing, for example, in April 1864 that, “I am responsible … to the American people, to the Christian world, to history, and on my final account to God.”

And Lincoln’s Second Inaugural Address was dominated by religious themes: “Fondly do we hope, fervently do we pray, that this mighty scourge of war may speedily pass away. Yet, if God wills that it continue until all the wealth piled by the bondsman’s two hundred and fifty years of unrequited toil shall be sunk, and until every drop of blood drawn with the lash shall be paid by another drawn with the sword, as was said three thousand years ago, so still it must be said, ‘the judgments of the Lord are true and righteous altogether’.”

“The donation of this Bible offers a new opportunity to reflect on Lincoln’s religious beliefs,” said Ian Hunt, head of acquisitions for the Abraham Lincoln Presidential Library and Museum. “It’s a tangible connection to the fascinating question of what Lincoln believed and how those beliefs evolved as he endured tragedy after tragedy.”

It’s also a reminder of Mary Lincoln’s efforts to shape her husband’s legacy. She was furious over claims by his former law partner, William Herndon, that Lincoln had been an atheist. Giving this Bible to Miner may have been a way to encourage the reverend to offer an alternative view on Lincoln’s beliefs – which he did in later years.

“I never heard a word fall from his lips that gave me the remotest idea, that his mind was ever tinctured with infidel sentiments,” Miner wrote.

Dr. Samuel Wheeler, the state historian of Illinois, said, “As a widow, Mary Lincoln worked tirelessly and successfully to protect her husband’s memory. One of her strategies was cultivating allies like Miner who could offer a sympathetic portrait.”

The Lincoln Presidential Library and Museum uses a combination of rigorous scholarship and high-tech showmanship to immerse visitors in the life and times of Abraham Lincoln.  Visitors can see ghosts come to life on stage, watch TV coverage of the 1860 presidential election, roam through the Lincoln White House, experience booming cannons in a Civil War battle and come face to face with priceless original Lincoln artifacts.

The library holds an unparalleled collection of Lincoln books, documents, photographs, artifacts and art, as well as some 12 million items pertaining to all aspects of Illinois history.