Dissenting Votes At Conference: Everything You Need to Know | Meridian Magazine 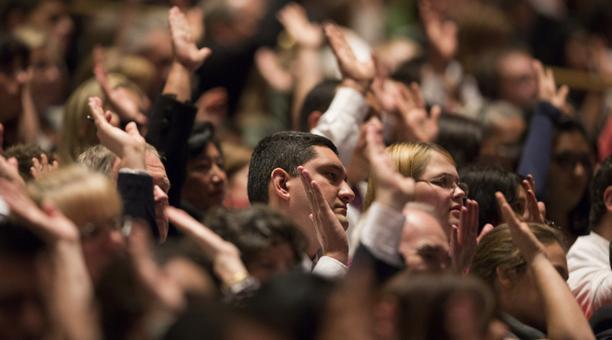 Dissenting Votes At Conference: Everything You Need to Know

Rumors suggested that some members came to this conference planning not to sustain the general officers of the Church. Well, it happened. Here’s what happens when that occurs.

Church members participating in the afternoon session of The 185th Annual General Conference of The Church of Jesus Christ of Latter-day Saints witnessed a rare event in general conference history: a sustaining vote that was not unanimous.

But however rare the incident, the move was not unexpected. In a recent press release, members of the group called “Any Opposed?” asserted they planned to oppose the sustaining of the general officers of the Church this conference.

The movement’s website purports that Any Opposed? is “not an organized group,” but is “acting as a resource for those who are considering this action.” They profess no agenda other than acting as a means for providing frustrated members “access to policy-making Church leaders to express feedback, opinions, dissent, or dissatisfaction about the current views, positions and teachings of the LDS Church.” No specific social or political complaints are mentioned.

In the event that member concerns are raised in this manner, the Church Handbook 2, which applies to all Church meetings, explains the protocol for dealing with these issues:

“If a member in good standing gives a dissenting vote when someone is presented to be sustained, the presiding officer or another assigned priesthood officer confers with the dissenting member in private after the meeting. The officer determines whether the dissenting vote was based on knowledge that the person who was presented is guilty of conduct that should disqualify him or her from serving in the position” (19.3).

When we have a legitimate concern of worthiness of any individual we are asked to sustain, first we must realize we are sustaining the action of the Brethren in calling of that individual. They sometimes lack some information that may disqualify and individual and that should be noted and discussed, realizing the Brethren will act on the information accordingly. Sometimes there are things we don't know and should be confident in our leaders. I have had concerned moments about certain individuals when called to certain positions, but in being honest with myself, I recognized a need to trust in my leaders to know what they are doing and why! I don't have to like individual's actions, but I am under obligation and covenant to show love as the Savior shows love to me...even though He, too, may not like some of my choices. I have never felt the Lord's withdrawal of His love from me. Our objections should not have political overtones, nor an attempt to tell the Brethren they are wrong and need to change their minds without cause, just because someone opposes their actions! No matter the scorecard of dissent, I prefer to remain on the winning team by exercising my faith in God and His inspiration to those "imperfect" leaders He calls to lead us.....if they were perfect then their callings would not afford them the growth and development that comes from serving the Lord faithfully and in humility. Many Christlike attributes can be learned by suffering through trials and difficulties, trusting in the Lord to support you and sustain you in your efforts! I wish the Youth Themes could once again present the wonderful little cards with various topics all supporting the theme, "BE HONEST WITH YOURSELF".....may we not lose the battle between good and evil because we have failed to be honest with ourselves....asking, "what am I trying to accomplish in what I am doing?" Will my actions draw me closer to the Spirit of the Lord or will I invite the Devil to lead my soul carefully down to hell?