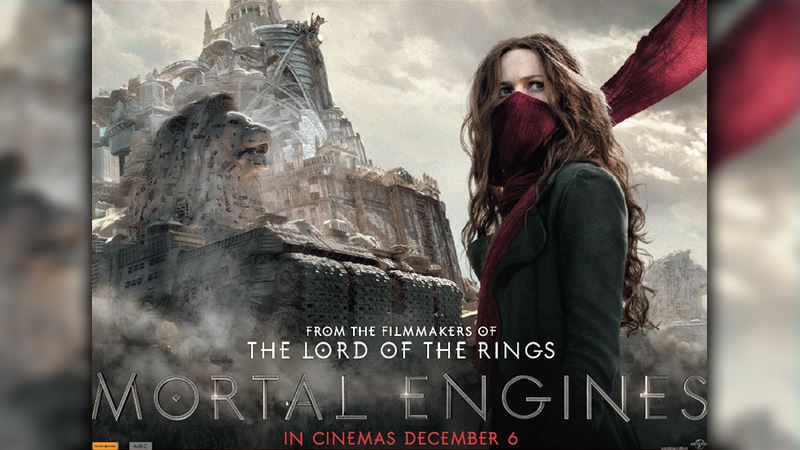 CTR Movies Review: Is ‘Mortal Engines’ Ok for Your Family?

Based on the book Mortal Engines by Philip Reeve, the movie features a young woman who has to survive in a post-apocalyptic age of predator cities. It feels like a Steampunk version of Mad Max: Fury Road or Waterworld. The title Mortal Engines is actually from Shakespeare’s Othello when he writes,”O you mortal engines, whose rude throats the immortal Jove’s dead clamours counterfeit, farewell.” Among technology and war, it is a quest for humanity.

Meh. Smaug meets Steampunk. The movie is produced by the incredibly talented Peter Jackson, who brought us the award-winning Lord of the Rings trilogy and The Hobbit trilogy. Unfortunately, this particular film doesn’t quite measure up. The trailer is a good indicator of whether or not you’ll enjoy the movie.

Like Peter Jackson’s former movies, this one is filled with fantastic CGI and set designs. There is a lot of destruction, danger, and noise, which often prevents good character development and emotional impact. We’re not given enough time and aren’t given enough information about some of the characters to really care about them. Some of the action scenes are too busy and it’s hard to tell what’s going on. With all the high-octane action on wheels, the footage was shipped to studios under the secret name “Squeaky Wheels.” Ha ha

Hugo Weaving is so fun to watch in everything he does. Most of the other actors are new to the Big Screen. The heroine with the American accent (Anna Fang) seems very out of place next to the grungy British characters of the dystopian world.

There are a lot of expository scenes to let you know what the heck is going on. Some moments are just forced, dumb, or don’t make sense. Also, some of the dialogue was pretty lame. If you have read the book, you’ll notice some changes in the story and you’ll probably also better understand the backstories and motivations of the characters.

The gospel of Jesus Christ teaches us to love others and this movie showcases several characters who are willing to sacrifice for others. The atonement was designed to allow us to repent, change, and become new creatures in Christ. Hester Snow, the protagonist in the film learns to open her heart, trust others, and become a better person. While the movie is not religious, it teaches us the principle of having the courage to put the past behind us and become our best self.