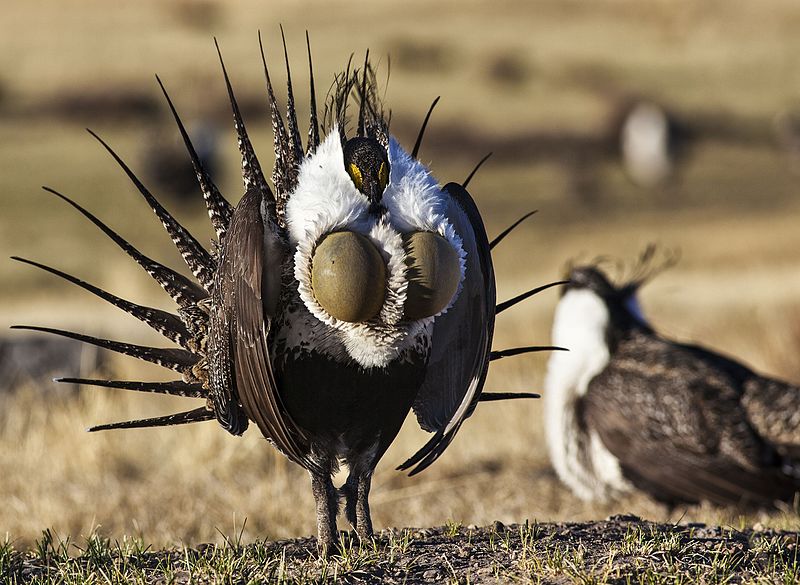 Sage grouse are an unmistakable species of bird, thanks to their one-of-a-kind breeding ritual. When the male wants to attract a mate, they head to a communal breeding ground and puff up air sacs on their chest in a quick motion that makes an unnatural, water-drop-like noise. Words don’t do it any justice; hear for yourself in the video above.

But besides being fascinating birds that make sounds you would not expect a bird to make, sage grouse are extremely important indicators of the health of the most widespread ecosystem type in the United States, the sage-steppe ecosystem. Once widespread throughout the Intermountain West, this ecosystem is now fragmented and imperiled.

“Sage grouse are a critical part of the ecosystem,” said Tabitha Hughes, an undergraduate student at BYU studying wildlife and wildlands conservation. “If they are doing well, then we know everything else is probably doing well too.”

The problem is, the sage grouse has not been doing well this century, in part because of invasive plant species, development and increased oil and gas drilling. A peak population of 16 million sage grouse is now down to between 200,000 and 500,000 birds in the western United States. In Utah, a population of sage grouse in the Strawberry Valley dropped from about 3,500 birds to only 150 by the late 1990s.

Since 1998, BYU wildlife conservationists have been leading students to the area, about 50 miles east of BYU’s campus, to help monitor and recover the population. Students help capture the grouse at night so they can put tracking devices on the birds. The automated GPS transmitters then ping satellites four or five times a day, providing rich data for BYU plant and wildlife sciences professor Randy Larsen when he downloads the information each week.

“We know exactly where the bird has been, where they nest and where their migration routes are,” Larsen said. “Knowing where they are and how they’re doing is vital. If there’s a healthy population of sage grouse, then the underlying ecosystem of the landscape is healthy and productive – something I think everybody wants.”

The field work, which represents one of the few positive stories for sage grouse across the west, brings paid summer mentoring opportunities for students and has resulted in a number of those students completing either a thesis or dissertation in the field of wildlife conservation.

The importance of their work has been underscored this month as the U.S. Forest Service has advanced changes to sage grouse protections in Utah and four other western states. The new changes alter rules put in place in 2015 that were designed to keep the bird from being listed on the endangered species list. The proposed rules, which will change the designation of 1,400 square miles of land, will affect the protection levels for sage grouse in Utah, Colorado, Idaho, Nevada and Wyoming.