PASSAGE ON THE TITANIC by Anita Stansfield | Meridian Magazine

PASSAGE ON THE TITANIC by Anita Stansfield 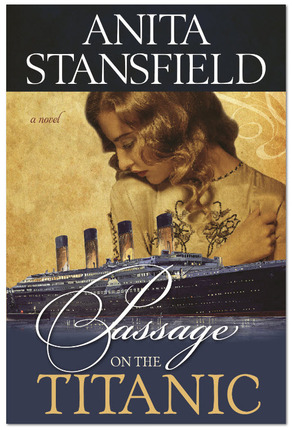 Passage on the Titanic by Anita Stansfield is the story of a young woman, Ella Brown, who is left destitute when her father commits suicide and her mother loses her mind. Tossed into the streets of early twentieth century London she nearly starves to death, trusts the wrong people, and winds up having an illegitimate baby in a paupers hospital. She is attended by a kind Mormon nurse from Utah who arranges better living conditions for her following the death of her baby. Eventually both Ella and the nurse, who is a midwife in training, end up on the Titanic. We all know what happens to the ship. From there on the story becomes one of healing and romance.

At first I wasn’t going to review Titanic, because I find stories about this 1912 disaster a sadly overdone topic. I found little to like or admire in the central character and had a difficult time getting into the story, but something about the story stayed with me and I decided to share my thoughts.

Ella Brown is weak and unprepared physically and spiritually for life. Her parents fed and clothed her, servants waited on her, they saw no need to educate her and she had no driving desire to gain an education. She was taught nothing of a practical or spiritual nature to prepare her to care for herself once her parents took themselves out of her life. Much of that failure was due to the historical period that denied women from prosperous families the chance to be independent, own property, or determine their own course in life. Ella never changes from this dependent role. She makes no choices or decisions on her own. She never does anything; life just happens to her. Even when the ship sinks, she does nothing to safe herself or anyone else. She wouldn’t even have a coat without her friend’s intervention. She doesn’t get into a life boat or out of it through any effort on her own part. Once she is safely on land and romance enters her life, Jonathan or his mother make all of the decisions concerning her healing and their relationship. I couldn’t help wondering if Stansfield deliberately created a character who is a subtle warning of the direction our own society is headed with our headlong pursuit of cradle to grave entitlements and structured living, leaving far too many individuals unprepared for sudden, unpredictable events and totally dependent on others to fulfill their needs.

The midwife Irene is based on a real woman, one from Utah. It seemed quite likely that Irene was looking for an escape from an unsatisfactory marriage when she felt a strong urge to go to London to further her obstetrical training. I know the story suggests a strong spiritual push to do so, but leaving three small children behind and giving more heed to her parents’ advice than her husband’s makes me wonder, especially where he seems more inclined toward his mother’s opinions than his wife’s. The pair seemed ill suited. She voiced missing her children and parents while away from them, but never mentions any sadness in being separated from her husband. I wondered too why she chose the London obstetric program instead of one of the highly touted American schools or hospitals of that time? I would have liked to see a broader picture of Irene.

The book is divided into two distinct sections. The first part, the part before the Titanic runs afoul of an iceberg, is preachy and slow. The second part is better written, drops the preaching, and is better paced. The sudden conversion at the end is a little too convenient.

Though Stansfield has set her books in a wide variety of times and places, she is best known for her exploration of emotional reactions to life’s problems rather than to intricate plots. She is fearless in attacking difficult situations, both contemporary and historical, that affect women. She is also known for the crying sessions her characters routinely have, but in this book the tears are better controlled than in her previous books and the characters are given more legitimate reason to cry. Readers who are plot oriented may feel bogged down by the long, detailed emotional explorations. Many readers enjoy this type of book which is often referred to as the “woe-is-me” genre which concentrates not as much on plot or characters as on delving into sympathy arousing situations which arouse strong emotions. A surprising number of readers love books that provide an excuse for a good cry. Several top national market writers are among those who do very well with this type of book and Stansfield has developed a strong following, however, even her legion of fans may have mixed feelings toward this book.

Anita Stansfield is a popular writer with dozens of books to her credit. She is one of the pioneers of LDS fiction and was one of the first recipients of the LDStorymakers Whitney Lifetime Achievement Award. She is married and the mother of five children . She also boasts of two adorable grandsons.

PASSAGE ON THE TITANIC by Anita Stansfield, published by Covenant Communications, paperback, CD, Kindle, 225 pages, $9.99 to $16.99